Whorl Inside A Loop 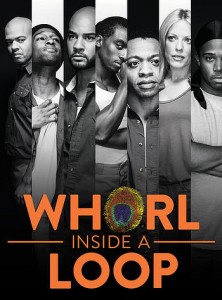 I believe it was Mark Twain who said the difference between the right word and the almost right word is the difference between lightning and lightning bug. After seeing Whorl Inside A Loop, I am torn, vacillating between thinking it’s a great play or an almost great play. There are countless great things about it. The ensemble cast for one. All of the actors are adept at playing multiple roles and slip in and out of different personas like eggs on a non-stick frying pan. Indeed, all of the male actors play multiple roles ranging from inmates to guards to lay people of every gender, race and ethnicity. The blocking is perfectly choreographed like a Broadway dance number. The dialogue is crisp, witty and incisive. The themes of rehabilitation and redemption are neatly addressed. So why am I fixated in the chasm between greatness and almost greatness?

Without spoiling too much, the plot is simple.   Apparently, in fulfillment of a sentence for an offense she committed, a female playwright of some repute volunteers her time and services in a maximum security prison. Specifically, she is assigned to work with a group of hardcore criminals (all convicted of murder). Her idea is to allow them to present their life stories via a play which would be performed before outsiders including the members of the parole board. Her producer falls in love with the idea and convinces her to plagiarize their stories (down to their actual names) and adopt the play as her own. We live in a litigious society. Some of the best lawyers in the country are jailhouse lawyers. The decision to rip the prisoner stories without regard to any sort of accountability hit a sour note and served as one obstacle to my leap of faith.

The second obstacle for me was the structure of the play. An hour and forty-five minutes without an intermission is a long time in our short attention span world (where six seconds is the norm on Vine).   While the actors are engaging, there was no rising climax or denouement. In the last five minutes of the play the convicts discovered that their stories were being embargoed by the playwright for her own personal use, but there was no retribution or real confrontation. They more or less accepted this betrayal. I walked out without a real sense of closure. Even with my knit picking, the themes, the acting, the directing, the choreography all made for a GREAT night at the theatre.

Once upon a time I was the director of a women’s work release facility in Lehigh County, Pennsylvania, and I’ve always said it was one of my most favorite jobs – truly it was. But I am a passionate woman and every hat I have ever worn: from bartender to psychotherapist, to writer and editor to college professor, to playwright, director, and producer, and even to mother; I’ve honestly loved them all. Every bit of me goes into these roles; but while in them something magical also happens; they have transformed me. The actions I take, the decisions I make, and the people with whom I interact all have an effect. Seeing Whorl Inside A Loop was something of a potpourri moment in my life, if that makes sense. It was as if little pieces of so many of the things I’ve done were swirled into a little mesh bag, tied neatly with a ribbon, its essence emanating in all directions. As if all of my vocations, my callings if you will, had come together, they coalesced. But at the same time, what Whorl represented was nothing like me. Nothing at all.

In Whorl, we have a spectacularly bare-bones set with six black male actors who deftly and seamlessly transform into two dozen characters; and in stark contrast, a lone white woman, “The Volunteer,” who trepidatiously spends time with six convicted murderers in a maximum security prison. Her task is to teach them how to tell their personal narratives; to have them boldly and unabashedly step outside themselves and describe the events which led to their respective incarcerations. Although we are told from the outset that one of the men “didn’t do it,” The Volunteer is anxious about being in the presence of all of these men. She is out of her cushy comfort zone; her life upturned by what had brought her there. It initially is unclear what landed her in this precarious role; but she is an actress turned playwright of sorts, as she decides early on, encouraged by friends, to outright steal the men’s stories and make them into a play she intends to call her own.

I can recall my first days and weeks at the work release; a petite twenty-something with no experience with anyone from a prison population. I was very nervous; I’d even go so far as to say scared and intimidated. Now, mind you, these women were more of a danger to themselves than others with milder convictions ranging from drug addiction to prostitution, some occasional DUI charges, and even writing bad checks. The women posed little threat to me or to the outside world when they were clean, sober, and well-supervised. I quickly learned that they all had a story; some of them horrific. Few if any of them sat before me as anything more than scared little girls, saddled with bad upbringing, stunted by their traumatic pasts, forced into grown-up bodies with the poorest of coping skills, and now having to live with the consequences of some very unhealthy decisions.

Like my own experience, Whorl’s The Volunteer discovers that these men have stories, too; and her fears about spending time with them are swiftly abated as she peels away the layers and learns who they truly are. She even appears to enjoy spending time with them and in the role she’s undertaken. But is it a selfless act? Is it from a pure heart? We know she was not there by choice.

Alternatively, the six men are in prison serving sentences that befit their crimes. Most people in society in general would not expect them to be rehabilitated. But like these men, The Volunteer has made some bad decisions, too, and she also is sentenced to a rehabilitation of sorts. But does she learn anything from her the experience? Has she taken away anything but to find new ways to violate the law and hurt others?

The question Whorl brought to mind as I exited the theater was who had learned most from the experience? Was it those who were least expected to be rehabilitated, those who’d committed the more heinous crimes? Or the one who should have been rehabilitated, who’d only received a slap on the wrist for a lesser crime. Then again, what defines a lesser crime? The play speaks both to white privilege and that which plagues and oppresses young men of color. There is much food for thought.