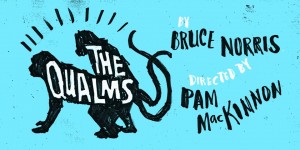 He Said: We had the fortunate opportunity to catch The Qualms at Playwrights Horizon in NYC at the tail end of its run. Written by Pulitzer Prize Winner, Bruce Norris (Clybourne Park) and directed by Pam MacKinnon, one of the busiest female directors in the theater today, the play provides much food for thought. Indeed, leftovers are aplenty for after theater discussions of the themes and meaning (if any) of the piece.

The play focuses on swinging couples and the indoctrination of two newbies into their coterie. While it’s a modern day setting, there is almost a subliminal retro 70’s feel harkening back to the days when Bob & Carol & Ted & Alice became household names (and, for some, role models). Shades of Woodstock can be found in John Procaccino’s portrayal of Gary, the apparent organizer and recruiter of the group. One can see the ghost of a Hippie in his Libertarian rants and pontifications.

The group of intimates is an eclectic one for sure, ranging from Roger (Noah Emmerich) who is the acknowledged Alpha Male and his aggressive partner Regine (Chinasa Ogbuagu), to morbidly obese (they should have used a better prosthetic) Deb (Donna Lynne Champlin) and her gay-bi-maybe not boyfriend Ken (Andy Lucien,) And last, but not least, the bad girl with the troubled past Terri (Kate Arrington) Gary’s partner. The newbies are played respectively by Sarah Goldberg (Kristy) and Jeremy Shamos (Chris). The cast, while certainly not unattractive as a whole, may not be the type of good-looking, sexy Adonises and Venuses that one typically imagines partaking in this lifestyle, giving credence to the theory that if one does fantasize about a libidinous endeavor, it is not with a beautiful actress or actor, but, rather, with the plain folk next door.

If there is a protagonist, then it is Chris, the newbie hubby who ultimately gets cold feet, even though it was his idea to attend the swinging get together. It is not clear exactly why Chris wanted to try it in the first place. It seems his wife had had lunch with an old flame and never mentioned it. If Chris’ predilection for revenge was to become a swinger, it would not make sense why he would also include his less than trustworthy wife. Nevertheless, it becomes apparent relatively quickly that Chris is the lone wolf whose opinions, feelings and points of view quickly clash with those of the others including, not surprisingly to all except Chris, those of his wife’s. His jealousy, conservatism and even antiquated views on present-day morality rise to the surface setting him up as an Archie Bunker persona. Meanwhile, Kristy jumps into the party by disappearing with Terri. Later Kristy reappears in a robe suggesting that the woman to woman in flagrante delicto was consummated.

While there are belly laughs galore, the themes and messages become somewhat muddled. For all of Chris’ conservative views, it seems that not telling him about a lunch date with an ex is a far greater breach of trust than his wife having sex with Terri. Of course, the hypocrisy goes both ways. For all of the group’s free love and tell it like it is rhetoric, they become shocked and awed at Chris’ total display of honesty when he refuses to have sex with the prosthetically obese Deb because “he is not attracted to her.” In an interview, Bruce Norris said about The Qualms that “[t]here’s a problematic figure, there’s a catalyst certainly in the play. You have a situation and you throw a new element into it. It’s really old timely structure of a farce: you throw someone into a situation they don’t know how to handle and problems result.” Certainly, on this level, the play works and the playwright succeeded on what he set out to do. On a deeper level, the audience is left to examine and review its own views and perceptions on present day morality. That is the best that any playwright can hope for.

She Said: Whenever Wayne and I can manage to get away we thoroughly enjoy taking in theater. I am as much a fan of quality Off-Broadway plays as I am of On-Broadway works. And while I love to be wowed by over-the-top sets, costumes, and special effects, I’ll take substance-driven, intelligent, snappy dialogue with rich, original characters over flashy colors or cables and motors any day. 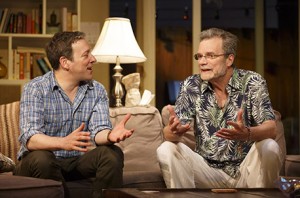 As we entered Playwrights Horizons and took our seats in the second row of the theater, I was immediately struck with the kind of excitement I remember feeling since I was a kid at my first Broadway play – the reasons for which would seem to go against my statement above! The fully-lit set of The Qualms – that which would soon become the living room/kitchenette of the characters Gary and Terrie – was spectacular. There was nothing left out; from the smoke alarm, the air vents and the light switches on the walls to the various items on the kitchen counter and living room shelves. It looked like actual rooms in a home. We gazed about for nearly 20 minutes before the show began, feeling as if we were literally IN the set; IN Gary and Terrie’s living room waiting for guests to arrive. The cozy and inviting theater space of Playwrights Horizons coupled with the true-to-life set created an intimate vibe; one which would become very important as the play unfolded.

When the guests began to filter in for an evening of food and drink (and wanton sex with anyone’s partner – the purpose for the gathering and the premise for the play itself) we began to discover bits and pieces about each of the characters. There was an effort to “show not tell” however, exposition was necessary to learn such things, for example, as the fact that morbidly obese Deb’s late husband was a big fan of these swinger evenings and her current squeeze, Ken, was his caretaker until his death; Ken, who may or may not be gay, but played the part in comically flamboyant fashion.

Other guests were Roger and Regine, an interesting and somewhat opposites-attract kind of couple; and newcomers, conservative Chris and his wife Kristy. All of the “regulars” had been there before. Due to the intimacy of the setting, deftly created by the set as well as spot-on acting and direction, we as audience members were made to feel more like guests than observers; and we immediately want to know how Chris and Kristy came to be indoctrinated into this 70s-esque night of swinging.

Throughout some very awkward and in-your-face exchanges we learn that maybe Chris brought Kristy as some kind of tit-for-tat. Chris recently had discovered that Kristy had a lunch date with an ex flame; and what else? He was holding a grudge. But what did he hope to accomplish giving Kristy more opportunity to betray him? Was it a test? Was he going to indulge in some extra-marital recreation himself for revenge?

Chris is in the hot seat throughout the play. His “qualms” become immediately apparent, and he has many. He becomes increasingly frustrated in every conceivable way; no one wants to drink the red wine he has brought despite continually offering it to everyone. He neither wants to consent to the sexual advances directed at him by Deb (he says he’s not attracted to her) nor does he want Kristy to sleep with another man or woman. He is morally against the group’s purpose yet he has accepted the invitation to the party. Once he begins to openly and vociferously object to everything the rest of the group dishes out, they turn on him in the same vociferous manner. And because we as the audience have been made to feel as much a part of the action as the actors themselves, we wince at the jabs and twist uncomfortably in our seats as much as Chris does so on the stage. 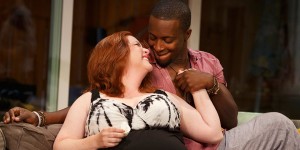 In the end, we don’t ever really learn why the newbie couple was in attendance in the first place. We also don’t know what happens afterward – did the party pull them closer together or drive them further apart? What did they learn? Was there even a moral lesson to be learned at all? Did the other group members change their views or will they reconvene the next weekend, maybe with another set of recruits?

As a woman, I can say I was hoping that for all of Chris’ soapbox moments, he would have extolled the importance and the virtues of the bonds of marriage; maybe he’d have acknowledged his undying love for Kristy, and expressed his desire to work out their issues. Or on the flipside, he could have taken a stance about her lunch date with her ex and made her answer for her actions. Instead we are left to wondering why any of us were there in the first place. But like any good play we’ve attended, this one left Wayne and me talking about it for a good long time after we’d departed the theatre.