THE MAKING OF THE CULT CLASSIC OF ALL-TIME…(hopefully)…Kissy Cousins, Monster Babies 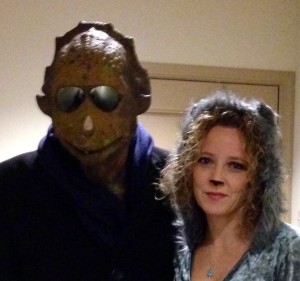 Danbury-based, husband-and-wife producing, directing, and writing team, Stephanie C. Lyons-Keeley and Wayne J. Keeley, are shooting an award-winning, vintage, cult classic right here in their hometown. Wait – say that again? How can they be shooting a film that has already achieved “vintage” and “classic” status whereby it already has been shot? Well, it’s a story that is twenty five-plus years in the making – and that has to be told first. 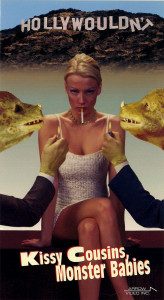 “Old films never die, but they will fade away if you let them,” Keeley says. Emmy Award-winning producers, Keeley and his long-time business partner, Craig Dobson of Darien, CT, wanted to shoot a horror film back in 1992. They raised enough money to make a movie, but it ultimately was not to be in the horror genre. Keeley had just finished reading Jurassic Park by Michael Crichton and knew intuitively that it would someday be a blockbuster film. So he drafted a comedy about a pair of wacky producers and filled it with homages to countless other films. Jurassic-period dinosaurs were at the heart of the story. “We actually shot long before Jurassic Park was made into a movie. The actors kept saying, ‘What is this Jurassic crap all about?’ We were way ahead of our time!”

An off-chance remark in the production office gave the film its title – Kissy Cousins, Monster Babies and Morphing Elvis. And then it began. In 1992, the first scenes were shot with the Miami Dolphins Cheerleaders in Florida. What was to be a relatively low-budget quickie, straight-to-video shoot became an epic film, with a spiraling budget. The main part of the film took two years to shoot and spanned seven states including the District of Columbia. The film starred David Belafonte, Steve Kearney, Jack Plotnick, Nipsey Russell, Dr. Joyce Brothers, Irwin Corey, Michael Medved, Jeffrey Lyons, Mike Memphis, Marty Putz, the Knicks City Dancers, and countless others.

The project is historic – wait did you say historic? Yes. Due to the amount of footage that was shot, at the time it was economically prohibitive to edit on film; therefore, it was the one of the first independents that was shot on film, transferred to video, edited on video and then transferred back to film. 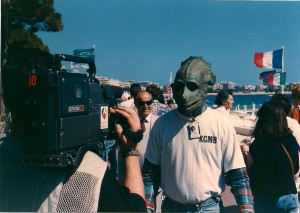 In 1994, Kissy Cousins premiered at the Cannes Film Festival and also won awards at Houston and Charleston Film Festivals. As a result of this early acclaim, it received an offer of a ten-city theatrical release including New York, Los Angeles, and Chicago. Keeley was getting ready to buy himself a new Firebird with all of the expected royalties – that was until the film entered “distribution Hell.” Creative differences arose about the marketing – the film ended up going through a total of three distributors, the last of which went out of business with the rights reverting back to the producers.

Kissy Cousins was relegated to storage where it sat for twenty-five years, unseen, until earlier this year when Belafonte, in a casual reference, asked Keeley to put up the film on YouTube for legacy purposes. Keeley was adamant that slapping up an early 90s film without a context was not in anyone’s best interest.

Enter Keeley’s muse, and wife, Lyons-Keeley. In addition to having seven kids and five pets between them, she’s also his creative partner, a writer, producer, professor, and owner of Someday Productions as well as owner of the couple’s highly popular and successful entertainment blog, Pillow Talking. Together the pair sat down to write a short piece for so-called “wraparound” footage that would make the film socially and politically relevant to today. “What started as a quick five-minute piece has become a much longer opening and ending for the original film Kissy Cousins,” Lyons-Keeley said. “We’ve created a monster (no pun intended)! We’ve called on favors from friends, actors with whom we’ve worked in the past, and we’re even using my parents and our kids. It’s going be a heck of a fun ride.” 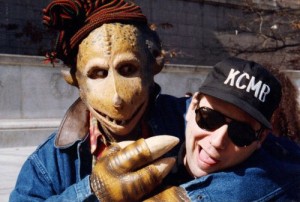 Dobson and his wife, Monica, along with Keeley and Lyons-Keeley will be shooting this piece together at Western Connecticut State University (where Keeley and Lyons-Keeley teach) and on the streets of the city of Danbury, Sunday, August 13. So what is the title now? The History of Everything, Circa 1993 to the Present, Formerly Known as Kissy Cousins, Monster Babies and Morphing Elvis. The producers will have to worry about how to fit that on the marquee down the road.

With the new footage, it rises to a new level – it will have taken twenty-five plus years to finish. Even Richard Linklater, the director of Boyhood, can’t hold a candle to that!

Jack Plotnick who is well known as an actor, teacher, writer, director, and producer will be reprising his role as “Scratchet” – pronounced Scra-chey. You may recognize him from recurring roles on cult faves “Buffy the Vampire Slayer,” “Ellen,” “The Mentalist,” and most recently the Jane Fonda/Lily Tomlin vehicle “Grace and Frankie.” He also is the co-writer and director of the 2014 film “Space Station 76,” as well as the Broadway hit “Disaster!” He also produced, co-directed, and starred in the 2006 Lifetime Television series “Lovespring International.” 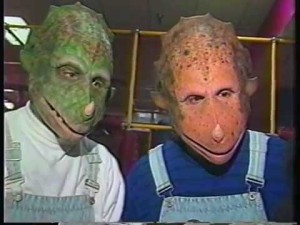 Charlie Dobson (and father to Craig), a known voice-over actor and radio personality, also will reprise his role. Countless others are participating in the pick-up shots including New York actors Danielle Adams, Logan Roberts, Bligh Voth, and Michael Werner; Connecticut actors Kathleen Narowski and Jason Phillips; and other Connecticut residents who may or may not be getting their first shot at 15-minutes of fame, including: Sue Brady, Finn Dobson, Elaine Lyons, Joey Lyons, Stephanie Lyons-Keeley, Lynn Mosher (a stand-up comedian), Kim Romero, Madison Roynan, Aidan Schultz, Brady Schultz, Chayce Schultz, and Kylie Schultz.

In the original Kissy Cousins, national and international companies donated goods and services and/or sponsored the film, including Snapple beverages, Tyco, Gold’s Gym, the Hollywood Reporter, Parker Meridian, and LensCrafters. Local companies are now coming on board for the August shoot including Stew Leonard’s and Augie’s Numero #1 for donations of food and Craft services; the Danbury Smokeshop and Vapor Store, Bogey’s Formalwear, Joseph Merritt & Company, Western Connecticut State University, and the City of Danbury.

Outtakes from the original film can be seen here…