Pillow Talking’s Review of THE LEGEND OF GEORGIA McBRIDE 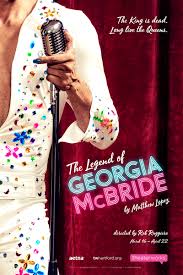 legend – an extremely famous or notorious person, especially in a particular field.

“the man was a living legend” 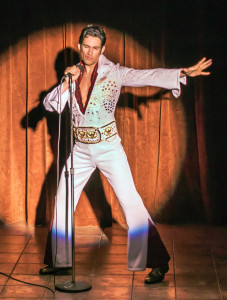 It comes as no surprise that Producing Artistic Director Rob Ruggiero of the renowned (and nearly legendary) Hartford TheaterWorks selected a dynamic, exuberant, colorful piece of theatre titled The Legend of Georgia McBride to tuck neatly amid the theatre’s other varied and equally vibrant productions as part of the 2017-2018 season. And with all the snow keeping everyone in hibernation mode so far into this wacky spring, this is the brilliant ray of sunshine of which everyone is sorely in need. Written by the young and already prolific playwright and screenwriter Matthew Lopez, it’s the kind of show that’ll have you grinning from ear to ear and one you won’t want to end – and as luck would have it, there’s some fab, post-curtain, bonus entertainment to keep the buzz going!

Directed by Ruggiero, this non-stop ride of loveable kitsch, glitz, and glamour is a captivatingly feel-good experience. It packs a gentle punch as it sneaks in its central themes of tolerance and acceptance (of both self and others), craftily clad in wigs, stilettos, and oodles of sequins. And if imitation is in fact, the sincerest form of flattery, then the linguistically gifted Lopez has also set a stage rife with admiration and love for the art of entertaining and some heavy-hitting entertainers themselves – from Elvis to Liza from Barbra to Shania, it’s fun, fun, fun with a capital F.

So, what’s a struggling young husband/Elvis impersonator to do? When the endearing and affable protagonist, Casey, must face the fact that his gig just isn’t hitting its mark anymore at a Florida Panhandle dive bar, he’s in hot water with both his landlord, Jason, and his wife, Jo. Jo’s meager tip haul from waitressing won’t cover the rent and now they learn they’re going to have another mouth to feed.

Much to Casey’s dismay, his stressed-out boss Eddie has a plan to bring in new patrons, but it’s one that leaves Casey’s new bejeweled jumpsuit hanging in the closet. Instead, Eddie has enlisted in the aid of his cousin “Miss Tracy Mills” and her not-so-trusty partner Anorexia Nervosa a.k.a. Rexy – that is, when Rexy’s not passed out drunk. Tracy and Rexy are hot-to-trot drag queens who’ve certainly played better (and cleaner) venues.

As luck would have it – or not – one evening Casey’s called to fill in for the blotto Rexy and after his untimely christening, he’s hooked, on the money at least. And though he can’t quite wrap his head around this new brand of performance artistry, there’s something to the energy it brings out in him. Where it all leads, well, you’ll just have to find out.

Austin Thomas as Casey is phenomenal. He brings vulnerability, tenderness, and a whole lot of…verve into those lady underthings as he comes into his own. Who’d have thunk a straight guy could pull off drag? Jamison Stern as Miss Tracy Mills is a dynamo in a dress – sassy, spunky, and straight-up spectacular (no pun intended here). Samaria Nixon-Fleming is the primary source of estrogen in the production, she’s got great chemistry with Thomas and delivers a powerful performance as his voice of reason and responsibility. Nik Alexander is a cut up as Rexy – at times totally obnoxious, and at others, knock-down, drag-out (sorry for the continual puns) hysterical. He also doubles as the equally funny, one-liner dropping Jason. And J. Tucker Smith as Eddie is terrific as the mildly overbearing, slightly hard-hearted boss.

Run, don’t walk to this one – but take off your heels if necessary. It’s nothing but pure exuberance from beginning to end.

We’re all born naked and the rest is drag. – RuPaul

The Legend of Georgia McBride is one of those rare plays that falls squarely within the definition of dramedy: at times side-splittingly funny and at other times poignant and heartfelt. TheaterWorks Hartford has scored another hit with theatrical legs that will carry it eventually to a film adaptation. (The Big Bang Theory’s Jim Parsons is presently rumored as the main attachment.)

Clearly, actors in drag are no longer a novelty to stage and/or screen. As any eighth grader who is reading Shakespeare’s Romeo and Juliet in middle school probably knows, all the male actors play female parts. I remember growing up waiting for the week that The Flip Wilson Show would feature him in drag as Geraldine Jones. Other iconic favorite drag pieces of mine include Some Like It Hot, Tootsie, Mrs. Doubtfire, La Cage aux Folles, and countless others (special nod to John Travolta as the mother in Hairspray). Even America’s most cherished actor, Tom Hanks, did a turn in drag on TV’s Bosom Buddies. And let’s not forget one of the most successful drag queens of all time – RuPaul. 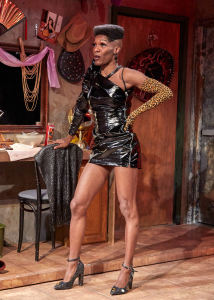 So what is it about The Legend of Georgia McBride that makes it so delightful and special? There are several reasons. In no particular order, the casting and acting are spot-on. The five-person cast is knock-down drag-out (pun intended) sensational. One of the major criticisms of some drag shows is that the actors play caricatures. Not so here. Both Jamison Stern (Miss Tracy Mills) and Nik Alexander (Rexy/Jason) portray real, flesh and blood, three-dimensional characters, not just drag queens who lip sync. Their backstories are peppered through the play in subtle exposition so that we get a real depth of understanding about their characters and what has led them to the point where they are in the present. Austin Thomas is wonderful as Casey, the cisgender male, who, like the shy, insecure and vulnerable Adrian in the film Rocky, blossoms into womanhood (well, in Austin’s character’s case, it’s full drag queenhood). J. Tucker Smith plays a great straight man to his comic cohorts (no pun intended). And a special nod must go to Samaria Nixon-Fleming as Jo, Casey’s practical wife. All the actors also should be credited as quick-change artists.

Although somewhat predictable at times, Matthew Lopez, the playwright, has written a tight, thoroughly entertaining and educationally illuminating play about the life of actors who make their living in drag. Mr. Lopez’s star is obviously on the rise. 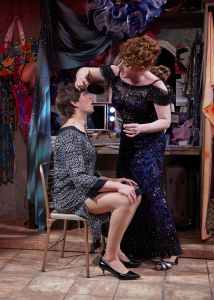 Although the play is not technically billed as a musical, for all intents and purposes the music and choreography are integral parts of the play-within-a-play portions. Kudos to Choreographer Ralph Perkins. As always, Rob Ruggiero’s masterful direction is elegant to a fault. Whether it’s a musical, drama or hybrid like this show, there is no one better at working with the actors to get to the heart of the characters and the narrative.

The Legend of Georgia McBride is destined for great things – perhaps even a legendary theatrical piece? My advice is to catch it now while it’s in its prime.