The History of Everything… 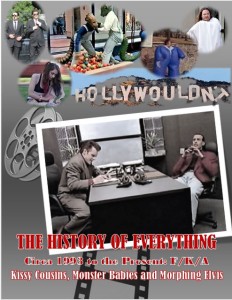 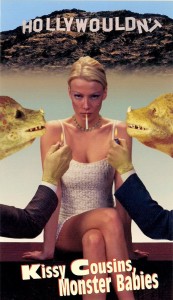 Two Hollywood Producers try to save their dying careers by creating a blockbuster out of old movies and their warped imaginations. What they don’t know is that they are being mined for their creative ideas. The film was in production for 25 years and shot in seven states including Wash D.C. (Linklater eat your heart out!). Homages galore! The next Rocky Horror!

The Making of the Cult Classic of All Time…hopefully!

Emmy Award-winning producers Wayne J. Keeley and Craig Dobson wanted to shoot a feature film back in the 1990s. Keeley had just finished reading “Jurassic Park” by Michael Crichton and knew that it would be a blockbuster film. He penned the initial draft of a satirical comedy about a pair of wacky producers and Jurassic-period dinosaurs. “We shot scenes before Jurassic Park was made into a movie. The actors kept saying, ‘What is this Jurassic crap all about?'”

An off-chance remark gave the film its working title – “Kissy Cousins, Monster Babies.” What was to be a relatively low-budget, straight-to-video shoot became an epic film, with a spiraling budget and a film that took 26 years to make. (Richard Linklater eat your heart out!).

“We had so many versions in different formats and running times,” Keeley said. “We never had a picture lock.” Enter Keeley’s muse, and wife, Stephanie Lyons-Keeley. She’s also his creative partner and owner of the couple’s highly successful entertainment blog, Pillow Talking. Together the pair sat down to write additional material that would make the film relevant to today.

With the new footage, it rises to a whole different level. Its full title is “The History of Everything, Circa 1993 to the Present: Formerly Known as Kissy Cousins, Monster Babies and Morphing Elvis.” (We call it “KCMB” for short.)

What began more than 26 years ago as a quick, down and dirty idea for a direct-to-video film “morphed” (to use the vintage post-production lexicon) into over a quarter of a century journey down the rabbit hole of creativity and changing technology and life imitating art. “Kissy Cousins, Monster Babies and Morphing Elvis” (KCMB) is a social and political satire that I believe is as relevant today as it was when we shot out first footage for the film in 1992 as well as our last piece in 2018. KCMB spans not only the vacillating societal and political motifs over the past 25 years, but is a reflection, as well as a product, of the changing technology in the industry. KCMB contains not only 35mm, 16mm, Super 8 mm footage, but also 4K HD sequences. Originally shot on film, edited on video, then new footage as recent as 2018 shot on HD and edited on HD, KCMB has grown up with the generation that has evolved with the shift from the analog to the digital age. But more important than anything else, I hope that KCMB is an intellectually stimulating, thought-provoking, hysterically funny film.                    — Wayne J. Keeley 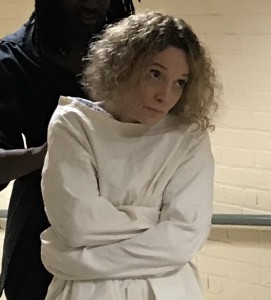 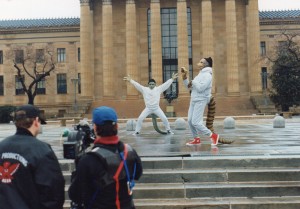