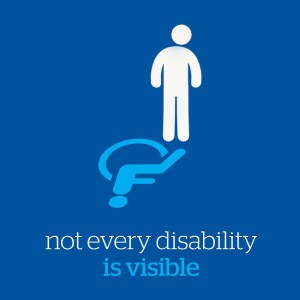 “You never know what goes on behind closed doors” – it’s an adage with which most of us are familiar. If we go deeper, we might consider that we know even less about what goes on inside one of the most complex organic and highly evolved constructions of all time – the human body. That is because how one looks on the outside indicates little about one’s inner workings – whether it be their heart, their mind, or any other organ system. The person who sits next to you on the train or the bus, the people you pass on the street or in the mall, or even your co-workers could be part the growing minority of individuals with “invisible disabilities” (IDs) – those whose appearances may look fine, even exceptional to an onlooker. They may be functional in many arenas, but inside they may have any of a number of insidious abnormalities that render them physically, emotionally, mentally, and therefore legally disabled.

In the work environment, this is often a daunting task. For employers, their role is to balance the rigors of The Americans with Disabilities Act (ADA) with the necessary demands of workplace productivity without crossing the line into discrimination territory and legal culpability.

An invisible disability is generally defined as one which is not easily perceived or is not readily apparent to others. For example, a person like my stepson who has oculocutaneous albinism (reduction or complete lack of pigmentation in hair, skin, and eyes which affects vision in varying degrees) may be just as disabled in a workplace environment as someone who is constrained to a wheelchair. Both individuals require (by law) the necessary accommodations so that they may be successful in their jobs. Unfortunately, this kind of “hidden” disability (my stepson looks very fair, rather than completely white, and “seems” to function in a typical way) may escape the Human Resources gatekeepers as easily as an emotionally abused child with no outward injuries slips through the cracks in the legal system.

It is not surprising that the incidence of discrimination charges filed with the Equal Employment Opportunity Commission (EEOC) has risen dramatically – more like having exploded into a mushroom cloud from an atomic bomb – and is estimated to be in the millions. Claims made by persons with IDs are based upon innumerable diagnoses – estimated to be in the thousands – anything such as malignant hypertension, diabetes, Lyme disease, Crohn’s disease, chronic pain syndrome, PTSD, depression, bipolar disorder, strokes, and on and on ad infinitum.

Two principal hurdles arise for people with invisible disabilities: credibility and comprehension. First, people with IDs are often perceived as malingerers, complainers, or hypochondriacs – and this perception sadly may come from the people closest to them – members of their own family, friends, or co-workers with whom they interact on a daily basis. The second issue is of comprehension: people cannot or will not wrap their heads around the fact that a person may have a legitimate disability when few or no outward signs exist.

I myself have been subject to these two hurdles in various contexts (which is in great part why I am writing this article with the assistance of my wife). I have a lifetime disability (handicap) parking permit which was issued to me by the Department of Motor Vehicles for having a legitimate disability. Despite the fact that I have been diagnosed with degenerative disc disease (why I originally was issued the tag), I also am a stroke survivor, have malignant hypertension, and am essentially a poster child for a walking infarction and embolism. When I get out of the driver’s seat without a cane or walker, I have been subject to sneers, dirty looks, and even R-rated mumblings and grumblings. For some individuals, road rage is nothing compared to having to park in the hinterlands of a shopping mall.

This situation is compounded in the workplace milieu where an employee who has an ID may elect not to openly discuss his or her personal situation for fear of recrimination or retaliation. Often when employees with IDs request accommodations, even simple ones, they may be told it is not the company’s policy, or it’s simply not possible, or they are dragged into a protracted “interactive process” (collaboration between the employer and employee to determine suitable job duties or environment) which can often leave both sides short of a real panacea. Indeed, if the interactive process takes a long time, a person suffering with a degenerative ID or one which is exacerbated by stress, may actually become worse during the intervening negotiations to a point where more accommodations may be needed through no fault of the employee. It is important for employers to be vigilant in this regard – an ounce of prevention is worth a pound of avoidance of liability under the ADA. Employers should be alert to changes in an employee’s productivity or unusual time off requests including frequent absences, hospitalization stays, and family or other emergencies. It also is critical to apprise employees of the benefits of the Family Medical Leave Act and/or other possible workplace alternatives which may be buried deep in the recesses of a corporate handbook. This can aid both employee and employer and avoid both from facing what could become serious ADA violations and discrimination charges down the road.

The entire subject of workers with IDs poses a slippery slope for employers. EEOC complaints and ADA lawsuits do not generate good ink, especially for high-profile companies. In addition to the Federal Americans with Disabilities Act, every state and many municipalities have their own disability acts, some of which may be more favorable than the federal statutes. This is the case with respect to New York City’s Disability Law which is generally deemed more amenable to the disabled employee than the federal act. Consequently, forum shopping is a rule in these cases rather than a raised-eyebrow tactic or an exception. It also should be noted that there are myriad law firms specializing in labor, employment, and discrimination law that are eager and hungry for ID cases. The law, nearly always, is on the side of the employee.

What employers must remember is that when an employee asks for an accommodation, he or she is not asking for a perk or favor to be granted from a corporation’s internal policy handbook, but it is instead a basic benefit to which they are entitled under the law. This also is not “special treatment,” but rather a necessary aid both to them and to the employer to ensure optimal workplace productivity. As Shakespeare said, “A rose by any other name would smell just as sweet.” An invisible disability is still a disability which mandates equal treatment and acknowledgement by all.