THE DEATH OF CINEMA — An Essay by Wayne J. Keeley 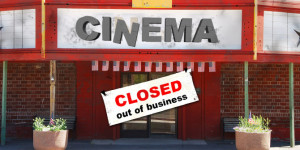 THE DEATH OF CINEMA

An Essay by Wayne J. Keeley

“When beggars die there are no comets seen; The heavens themselves blaze forth the death of princes.” –William Shakespeare

If only Shakespeare’s quote was true about the death of cinema. But it is not. Cinema’s passing took quite a bit of time, like cancer in the marrow. It was terminal for a relatively long duration, but no one wanted to (or cared to) notice. And who would have thought that the demise of cinema would not be due to television, which the pundits had predicted back in the 50s, or VCRs, Cable and Satellite TV, or DVDs. Indeed, like chaos theory, where the simple flapping of a butterfly’s wings can cause a tidal wave in another part of the world, so too did the cinema fall to the simplest and seemingly innocuous of things – an online bookstore.

Obviously, it was not just the genesis of the likes of Amazon and other online outlets that immediately murdered cinema. As noted above, it was a process. Those events were the start of a global epidemic of public media avarice facilitated by technology and instant gratification that finally brought the behemoth down. But the death knell was sounded – loud and clear – particularly at awards shows like the Emmys and Oscars when stalwart and seemingly impregnable content providers like Warner, Paramount, Sony were replaced by names of other content providers –Amazon, Netflix, Hulu etc.

The eulogies were succinct, yet completely on point. Martin Scorsese, certainly one of the great pioneers of cinema who should be ranked with Chaplain, Murnau, Truffaut, Welles to name a few, gave the opening remarks in an interview when commenting on Marvel movies:

“I don’t see them. I tried, you know? But that’s not cinema,” Scorsese told Empire magazine. “Honestly, the closest I can think of them, as well made as they are, with actors doing the best they can under the circumstances, is theme parks. It isn’t the cinema of human beings trying to convey emotional, psychological experiences to another human being.”

One may be able to argue that he did not SAY cinema is dead, but for all intents and purposes, what he said could not be interpreted in any other way. Francis Ford Coppola called the Marvel movies “despicable,” and then backpedaled by blaming a bad translation. He nevertheless is purported to have said the following:

“Well you know because of the lack of risk in the production. Marty Scorsese says that the Marvel picture is not cinema, he’s right because we expect to learn something from cinema, we expect to gain some enlightenment, some knowledge, some inspiration. Arguably, I don’t know that anyone gets anything out of seeing the same movie over and over again, which is the Marvel movies. A thing that has no risk to it. I’ve said before, making a film without risk is like making a baby without sex. Part of it is risk, and that’s what make it so interesting, that’s why we learn so much when it’s made.”

Whatever these filmmaking giants actually said, meant to say or refrained from saying, the point is not Marvel. The point is that cinema, as we NOW know it is not what cinema used to be. My neighborhood AMC multiplex IS like going to a theme park. First, it’s expensive as hell. Secondly, only films which cost a gazillion dollars – whether they be Marvel or some other big budgeted, A-List reboot – is playing. The last film that was “cinema” and that I saw in a movie theater was The Wife with Glenn Close. Somehow the film made it under the wire. I am certain that if the Producers pitched that today, it would be stamped VOD and shipped off to Netflix.

Oh, and now there are every conceivable do-dads at the popcorn stand – from lip gloss to ear buds – for those impulse buyers. You just never know if you need an extra key chain or phone case while watching your movie.

The movie seats are now numbered – so you cannot choose to come early and get your favorite center seats – the ones just above the orchestra pit so you can put your legs through the bars. The chairs are lounges which vibrate in sync with the Sensurround sound – and that occurs whether you’re in the IMAX theater or just the regular “digital” one. You are literally forced to have a theme park experience whether you want one or not.

What people fail to realize is that it takes about as much money to book a movie in today’s theaters as it does to launch a new attraction at a theme park. Sure, a film may cost 100 million dollars to make, but it probably costs another 200 to 300 million to promote that film in a national release and put it into theaters around the country.

Of course, as theater-going patrons, we must take a certain amount of responsibility for the death of cinema. Certainly, this crime would not and could not have occurred unless we were, at least in some part, complicit. In fact, I am willing to go out on a limb here (no pun intended) and like rhesus monkeys in some Pavlovian experiment, while watching these “attractions”, we anxiously await the adrenaline rush over the next jump scare or big pyrotechnical effect. Story content, plot, theme and character arcs have all become subordinate to action. It is hard to believe that in Hitchcock’s day, the “director” only worked with the principal actors, leaving action scenes like car chases to the much maligned second unit directors.

If truth be told, due to the quick cutting and layered effects (and I used to edit music videos), half the time, I don’t know what is going on. If there’s a fight scene, I nosh on my curly fries and wait to see who is left standing at the end to figure out the victor. Just to be clear, we are not just talking Marvel here. The last Mission Impossible was SO over the top with respect to action sequences that Peter Graves is probably rolling in his grave (pun intended).  When one walks out of the new “theme park” theaters, a likely comment is, “Wow, great flick and awesome greenscreen!)

If there is a smoking gun or nine-inch nail behind cinema’s downfall, it is the technological innovation and implementation of “streaming” – coupled with more barrels of money than Mr. White had in Breaking Bad – offered to A-Listers to jump from James Cameron’s big screen epic, Titanic, to Martin Scorsese’s small screen epic, The Irishman. As Adam Sandler has found, it’s hard to say “no” when they are throwing hundreds of millions of dollars at you. When you have that kind of paycheck, who cares what rotten tomatoes, metacritic, IMDb or anyone else thinks. That’s how Elvis Presley made 29 of some of the most panned films ever produced by MGM. (I must admit that Clambake and Girl Happy are my favorites.)

There was a time when the best (and only) possible venue for a date night for the younger crowd was the local cinema. For years, cinema thrived on this basis alone. But “chilling over Netflix” (aka casual sex for the uninformed) has become society’s new amoral vanguard, stabbing a stake through the art of cinema as fatally as Van Helsing had stabbed a stake through the heart of Dracula.

Netflix, however, will get its footnote in history as both the Guinea Pig and first large scale streaming business model that eventually led to the death of cinema (just as Napster has its historical footnote for the death of the music industry).

But Netflix is sitting on billions of dollars of debt and is now a relatively short timer in the burgeoning and embryonic industry known as “Streaming.” There is only so much good money it can throw after bad by continuing to finance bad Adam Sandler and Sandra Bullock movies. Eventually, deep pocketed Amazon, Disney and Apple will surpass it as the go-to VOD platforms. (I think I still have three Netflix DVDs that need to be mailed back. Hmm…I hope I don’t get charged.)

The Saturday matinees of my childhood, when I could go to a movie theater and see on a double bill, The Sons of Katie Elder with John Wayne and Trog with Joan Crawford and still arrive home in time to watch Saturday Night at the Movies on TV are now a part of memory, nostalgia and history. As Shakespeare said (or almost said), “Farewell Cinema! God knows when we shall meet again.”

NB: I must say that The Morning Show with Jennifer Aniston and Steve Carell looks interesting. Where is it playing? Oh, yeah, Apple TV+. I ‘ll have to see if I can get that via my fire stick.