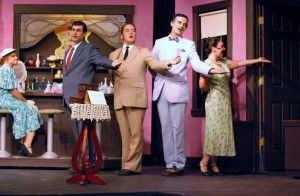 Regional and community theater can be like a Sergio Leone spaghetti western: good, bad & ugly. (Just dated myself with that one!) But when you find something that works, it’s like finding a diamond in the rough.

SHE LOVES ME presented by the Opera House Players at the Broad Book Opera House in Connecticut is a gem. While there haven’t been many revivals of the version that was directed by Harold Prince on Broadway in 1963, the play served as the inspiration for several film versions including 1940 James Stewart-Margaret Sullivan The Shop Around the Corner; the 1949 Van Johnson-Judy Garland In the Good Old Summertime; the Tom Hanks-Meg Ryan You’ve Got Mail; and the classic song by Jimmy Buffet, If You Like Pina Coladas…

The plot is timeless. Two people, at least on the surface, hate each other. Unbeknownst to them, however, they are actually anonymous romantic pen pals. Without giving away too much, true love travels on a gravel road but, in the end, rises to the top.

This diamond in the rough version is polished until it sparkles under the capable direction of Meghan Lynn Allen. Of course, it helps to have expert musical direction from Broadway veteran Steven D. Cirillo. Speaking of the Great White Way, the acting and singing is of Broadway caliber. There is real chemistry between the leads Georg Nowack played by Michael Graham Morales and Amalia Balash played by Jennifer McCann. Ms. McCann has an incredible signing voice and is destined for big things in the musical arena. Kudos as well to the supporting actors, especially Tomm Knightlee (Steven Kodaly) and Martina Haskins (Ilona Ritter). Let’s not forget a great ensemble for an integrated performance overall. The harmonies and duets are performed to near perfection. A special nod is given to Michael Lorenzo who plays Ladislav Sipos, the Don Knotts-like store clerk that steals many a scene with his comic expressions and mannerisms. Indeed, he can make something funny out of hanging mundane Christmas decorations.

The set detail is stunning. Period props including wheelchair, cash register, ladder and antiquated phone all contribute to the play’s verisimilitude. Of course, the design of the Opera House itself is as much a part of the play as any other dramatic element. There’s not a bad seat in the house. The interior design of the Opera House is homey and comfortable and immediately puts one at ease.

SHE LOVES ME will make you love it. This one is not to be missed. 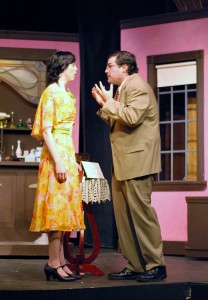 When Wayne and I received a request to see and review She Loves Me at the Broad Brook Opera House in Broad Brook, CT, neither of us knew for what we might be in store. It is a rarity that we (and more so HE) haven’t at least heard of a particular work, whether it be a revival or a new piece. Wayne has a wealth of information about most things related to film and theatre stored in his cultured noggin (I may have just a few less) and we both regularly scour current theatre reviews and offerings in the New York City area. This time it required a google search; however, so I quickly pulled up a brief synopsis which said little about anything other than perfume and letters.

Necessitating about an hour and a half’s drive from our home, you never know if an experience even is going to be worth the gas to get there (and with two gas guzzling vehicles, it doesn’t matter which we take.) In this instance, we also knew nothing about the Opera House or the players who would be performing (and we’ve seen our share of bad community theatre we must admit.) We came to learn that the Opera House, formerly the home of the Broad Brook Woolen Company, then an ice cream parlor and numerous other businesses, had recently undergone renovations and now was home to The Opera House Players who perform revivals of Broadway Musicals. It is stunning and the photos online do not do it justice.

After the GPS took us to the wrong “Main Street” in a completely different town, we were able to settle into our seats with (gah!) only about 30 seconds to spare before the show began. The smell of popcorn wafting through the beautiful venue was quite a tease, since we had no time to eat after a very wearing day prior to the show. But it wasn’t long before we were drawn into the performance and rumbling stomachs could be ignored.

As I always tend to note at the outset, the sets were fantastic. With terrific attention to detail, the moveable walls began as the storefront of Maraczek’s Perfumerie then twisted and turned to become the inside of the shop. Later it also would transform into a restaurant and then the bedroom of the main character. Little elements such as an old fashioned telephone and cash register kept the tone of the period (the late 1930s) when the original story Parfumerie was written.

So Wayne is always saying there are no new ideas; that everything we think is new actually is just recycled from old (a rationale he gives for “stealing” bits from other works now and then in our writing.) And it was Mark Twain who said it best: “There is no such thing as a new idea. It is impossible. We simply take a lot of old ideas and put them into a sort of mental kaleidoscope. We give them a turn and they make new and curious combinations…” With that in mind, it was not long into the tight, well-acted, and phenomenally sung production that I suddenly felt a sense of déjà vu. With little initial knowledge of the play’s storyline (the way I prefer it), I felt as if I was somehow transported into the prolific minds of Nora Ephron and her sister Delia. It was quite an “aha moment” when it struck me that She Loves Me had to have been the inspiration for the Meg Ryan/Tom Hanks hit You’ve Got Mail. The boy-meets-girl-with-whom-I’ve-been-corresponding-but-don’t-know-that-I’m-actually-already-in-love-with-you theme has been recycled in other films as well (The Shop around the Corner and In the Good Old Summertime.) I’m a sucker for great romantic comedies and You’ve Got Mail one has got to rank up there as one of my favorites. In fact, in the early part of Wayne’s and my relationship, we communicated quite a bit online (although we already had met face-to-face!) To me there is nothing like a warm, heart-feltwell-penned correspondence to capture what is in one’s heart.

Meghan Lynn Allen’s direction was spot-on as was the musical direction by Broadway veteran Steven D. Cirillo. There was a fun, sassy element to much of the dance pieces, choreography by Karen McMahon. The chemistry/animosity between the lead characters “Georg Nowack” and “Amalia Balash,” played by Michael Graham Morales and Jennifer McCann, respectively, was believable and endearing. Ms. McCann, who bears a remarkable resemblance to songbird Katy Perry, has a set of pipes on her which could rival any Broadway diva’s. Tomm Knightlee as “Steven Kodaly,” Martina Haskins as “Ilona Ritter,” Michael Lorenzo as “Ladislav Sipos,” Brad Shepherd as “Mr. Maraczek,” and Joshua Prouser as “Arpad Laszlow” rounded out the supporting cast. The rest of the company did a great job as well.

She Loves Me was well worth the trip and more than worth the low-price tag per ticket – quality theatre in a charming venue. We enjoyed every moment and will be back to see other works by this talented group. I’d wholeheartedly say, this one’s not to be missed! 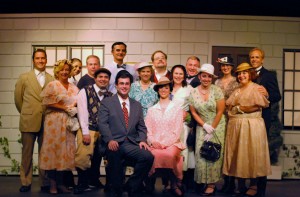