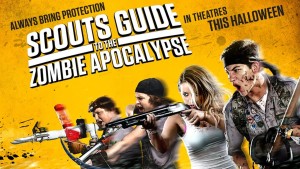 I need to be totally honest before starting this review.  I am a horror buff with a definite predilection for zombies.   I grew up on George Romero’s Night of the Living Dead and all of its progeny.  So to be fair, I have a natural bias for zombie movies, especially ones which do not take themselves seriously.  There, I feel better having made that disclosure. 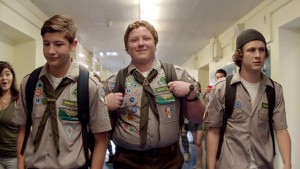 Scouts Guide to the Zombie Apocalypse looked both hysterically funny and scary from the trailer. While I had no intention of seeing it on the big screen (I was going to wait and see it on Vudu or Redbox), its convenient time slot fit perfectly into our date night (my wife and I try and carve out alone time whenever possible without our seven kids).  So even though I really wanted to see Steve Jobs, Crimson Peak, or even Burnt on the big screen, we ended up in the land of the undead. Armed with overly salted and buttered popcorn (which I intentionally do, much to my wife’s dismay), I settled into the seat ready to enjoy pure escapist entertainment with the rest of the theater patrons (two people sitting in the back row – on a Friday night!) While the movie had its moments (Cloris Leachman was hilarious), it missed its mark…by a long shot.  It had all of the ingredients of a great dramedy flick about zombies: flesh eating ghouls, naive young boys that have to become men, scantily clad women, director’s solid pedigree (Christopher Landon, son of the late great Michael Landon, directed it).  But it was missing something. Maybe it was Jessie Eisenberg and Woody Harrelson from Zombielnd. Or maybe it was the consistent deadpan humor of Shaun of the Dead. And maybe it was the palpable chemistry between the lead actors as evident in Warm Bodies. Just maybe it was all of those things.

Even knowing the boundaries of an “R” rating, there were at least three parts in the movie that made me squirm and I was thankful that I did not have our teenagers present.

All in all, Scouts Guide to the Zombie Apocalypse was a disappointment, particularly to this zombie aficionado. It was clear that Christopher Landon never saw his father’s 1957 flick, I Was a Teenage Werewolf, a fiendishly funny and scary cult classic.

Yes, they went there. And there. And O.M.G. THERE. In the recent October release Scouts Guide to the Zombie Apocalypse, they went everywhere, and they did so shamelessly.

If you’ve read any of my earlier posts, you know I’m not a fan of horror. But over the years of being titillated by zombies 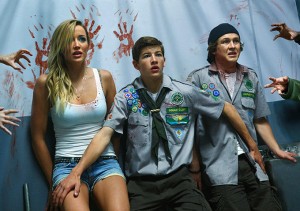 and their accompanying apocalypses, I’ve also become numb to them. Watching the tearing apart and devouring of human flesh, especially when it comes in the form of my guilty pleasure, the AMC hit TV show The Walking Dead (Wayne and his kids got me and mine hooked) or the newer Fear the Walking Dead; or similarly the films Zombieland, World War Z, or Warm Bodies, I’m, sedate, unfazed, unperturbed. I just love me some good zombie screen time. Wayne and I even have a screenplay we’ve written with our own take on zombies. So when we saw the trailers for Scouts Guide to the Zombie Apocalypse, I was intrigued. A comic interpretation with a new twist – boy scouts — on the old subject – the decaying, reanimated, brain-melted, flesh-hungry creatures.

SO the hour and 33-minute film, written by Lona Williams, Carrie Evans, Emi Mochizuki, and Christopher Landon and also directed by Landon (son of Michael Landon of Little House on the Prairie fame) looked like it had the makings of a lighthearted date night. Starring young actors Tye Sheridan, Logan Miller, and Joey Morgan with Sarah Dumont, David Koechner, Halston Sage, and the great Cloris Leachman, this could have been a fun romp; and it started out on the right foot as we got to know Sheridan, Miller, and Morgan as buddies Ben, Carter, and Augie respectively; three adolescent scouts, the former two who were looking for an out from the lame organization while still trying to feign support of the tireless devotion of the latter, their BFF Augie as he was honored by earning his “Condor” badge. The evening camp out in celebration of Augie’s badge serves to steer the trio clear of the impending apocalypse; until (of course) they find themselves smack in the middle of it, since Ben and Carter ditch Augie once they think he’s asleep and take off for a coveted high school warehouse party. 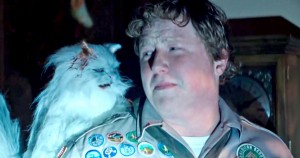 There were parts of the film that were downright, side-splittingly hysterical. Watching a zombie dance to “Hit Me Baby One More Time;” or seeing reanimated animals, including a house full of satanic-looking cats; or the fact that a zombified Scout Leader Rogers (Koechner) just couldn’t seem to be brought down despite guns, fire, and a grenade, kept the momentum going in this film that felt like it was traveling a hundred-plus miles per hour down the highway. But as Wayne and I always do, we dissect – sometimes quietly whispering during a film and most certainly afterward. And what we both agreed upon is that there were holes…big ones…potholes…sinkholes right and left. There were elements of the story that made you feel as if they accidentally were left on the cutting room floor in editing. Segues that were certainly far from smooth transitions as well as some positively strange occurrences.

Were there positives? Sure, a few. There was a solid, fun premise. Excellent acting on the part of the young trio with well-rounded characters and believable, buddy-type camaraderie. Koechner was a hoot and Dumont was a great asset to the cast. Of course, the inimitable Cloris Leachman was a bonus for the older generations who will actually recognize her (and even for those who don’t). The zombies were first-class and the film had laughs and gore as well as a well-paced plot.

The negatives? THEY WENT THERE…No spoilers here (I don’t believe in them), so you’ll have to see what I’m talking 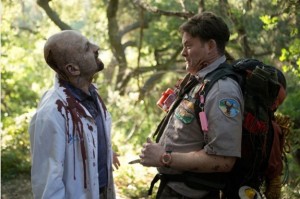 about. But thank God I didn’t take my kids to see it (all of us zombie lovers, I might have considered even taking younger ones to this R-rated flick). I’m far from a prude, but there were a few moments that were just mildly appalling and truly beyond sophomoric. And, the film was uneven, sometimes not knowing where it was going or even what kind of zombies it had in it. (Could they move quickly or slowly; could they “think” and “do” things or were they on autopilot? C’mon, when your brain is mush, how do you recognize Britney?) There were, as I mentioned above, spots which seemed as if some important backstory or other information was left out; sort of like when you take a bathroom break or run out to fill your popcorn and you’ve missed several minutes.

All in all, it was mildly entertaining. But was it worth the price at AMC? Um, no. Could I have waited for it to be released to DVD or seen it on Vudu? Sure. But do Wayne and I get to participate in much escapist entertainment (or escape alone together very often at all?) Nope. So, yeah, let’s just say it was a night out…