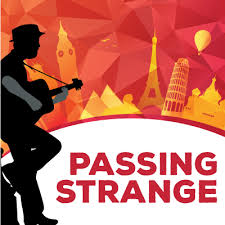 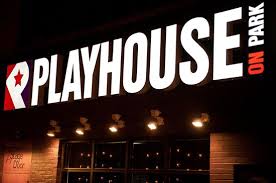 Passing Strange at Playhouse on Park in West Hartford, CT, directed by Sean Harris with book and lyrics by Stew and Heidi Rodewald, created in 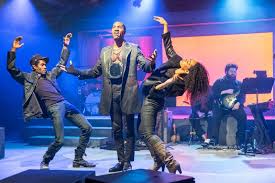 collaboration with Annie Dorsen, is an aptly named musical which entwines music, theater, and dance in a strangely engaging way. Vibrant and spirited dancing is top-notch thanks to choreographer Darlene Zoller.

A masterful song and spoken word narration by Darryl Jovan Williams (Narrator) effectively weaves together the convoluted story. It is a tale of a young bohemian known only as the Youth (Eric R. Williams) from a black middle-class American background who looks deep into his soul for “the real” through sex, drugs, and rock ‘n’ roll. Raised by a conservative Christian single mother, his journey takes him from 1976 LA to Amsterdam to Berlin. In a very layered Act 1, the high-energy dance number “It’s Alright” sets a lively tone with a rocker/cheerleader dance piece performed by Williams, Garrett Turner (Mr. Franklin/Joop/Mr. Venus) and Ensemble Karissa Harris, Skyler Volpe, and J’Royce that quickly roused the audience. A shift to the gospel number “Baptist Fashion Show” with Mother (Famecia Ward) and the Youth thickens the plot. As time passes, the strong-minded Youth smokes his first joint at a wayward youth prayer circle in “Arlington Hill.” He later is part of a short-lived punk rock band, but the Youth and the other band members learn more from failure than success. He makes the decision to leave home to develop his musical talents and sets out for Amsterdam, where fun numbers including “We Just Had Sex” keep the action hot. Later he heads to Berlin where he makes yet another life-changing decision and learns another hard lesson in “Paradise.” 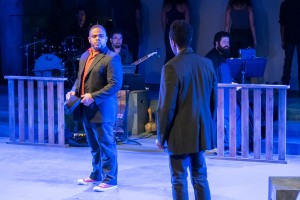 In Act 2 the Youth reaches a crossroads in West Berlin. With beauty in the midst of chaos, the audience is again roused with wild song and dance. Deepening glimpses of “the real” surface cabaret-style with “Identity” and “The Black One.” The Youth’s experiences begin to change him in his passing from place to place. Christmas soon approaches bringing with it the mounting issues with his mother; he eventually comes of age.

Passing Strange is heady stuff… And just as the Youth does, one also might ask is this “the real”? What is “the real”? And is there something more?