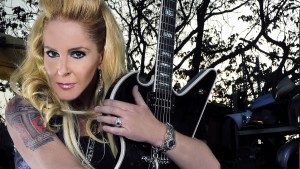 When one thinks of the hair bands of the 80s, Van Halen, White Snake, Guns N’ Roses, Aerosmith immediately come to mind. But in our politically correct world, we should remember the female counterparts who ruled the airwaves as well at the time: Joan Jett, Kim Carnes, Melissa Etheridge and, last, but not least, Lita Ford. Although Lita seemed to burst onto the 80s music scene like a wrecking ball with solo hits like “Kiss Me Deadly,” she had her roots and training in the 70s group The Runaways. 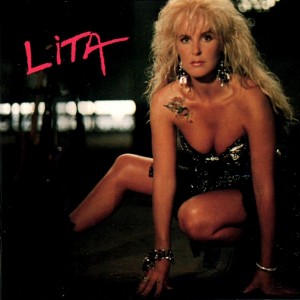 at the Mohegan Sun Casino in Connecticut.

Sometimes the problem with seeing artists after a long hiatus is that they can never live up to the frozen tableau that you have in your mind from the first time you discovered them. For me, Lita Ford conjures up the famous shot of her when she released “Kiss Me Deadly,” with her on her knees and her name sprawled in red letters.

I am happy to say that my memory of Lita Ford’s performance matched the frozen tableau in my head. She came out in skin tight red leather jump suit, yellow electric guitar and wailed her heart out. Armed literally with her tattoos, Lita proved that age is a matter of the mind and if you don’t mind, it doesn’t matter (thank you, Mark Twain). 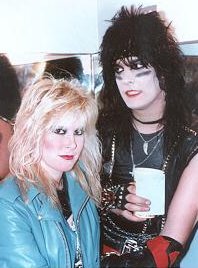 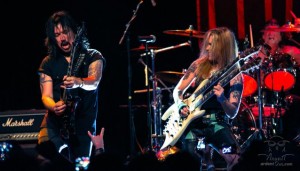 Her rendition of Mötley Crüe’s “Falling In and Out of Love” ( co-written by Nikki Sixx) was dynamic with what appeared to be afresh arrangement. Although the evening’s repertoire included few ballads, her “Close My Eyes Forever” duet with her bandmate Patrick Kennison (the former Union Underground guitarist and vocalist) would make Ozzy Osbourne proud. (She originally did “Close My Eyes Forever” as a duet with Ozzy and it remains one of her biggest hits to date.)

Her “Devil in My Head” drew the audience to the dark side with its heart pounding rhythms.

The highlight of the night, however, was her new arrangement of “Can’t Catch Me” which featured an INCREDIBLE, AMAZING drum solo by a shirtless, Bobby Rock, (when did he take off his shirt?) Bobby proved that he could play the drums with various parts of his body. He used his foot pedals to create heart pounding drum rolls as he scanned the crowd with his smart phone. At one point his forehead also served as a drum stick.

Kudos not only go to Bobby Rock, but guitarist Patrick Kennison (mentioned above) and bass guitarist Marty O’Brien.

If I had any criticisms, it was the fault of the acoustics of Wolf’s Den (not Lita) that had the decibel level set for a stadium rather than a more intimate, nightclub-like venue. I also would have liked to have heard the softer side of Lita – like “Mother” – which was written for her children who she was estranged from as a result of parental alienation.

But apart from those minor criticisms, the show delivered on all levels. Lita ended with her hit, “Kiss Me Deadly.” Although there was no encore, Lita and the bandmates did meet and greet and sign everything from pics to guitars for fans for over an hour.

My only regret of the night was losing $200 on roulette. I knew I should have left when they changed croupiers but thanks to my understanding wife, Stephanie, who indulged me my few hours of hedonistic play. 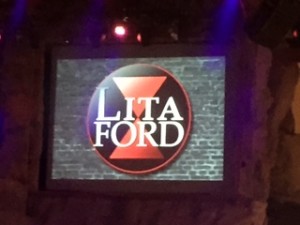 It was literally standing room only last night at the Wolf Den, the 300-seat “arena”/lounge smack in the middle of Mohegan Sun’s Casino of the Earth. Headliner and “Queen of Metal” Lita Ford, hard rock vocalist and guitarist extraordinaire pulled in quite the audience. With fans lining up for hours prior to the show, all hoping to snag one of the coveted seats in the intimate space, no one would be disappointed, however; the venue is open and even those who didn’t get it in (including us) could stand outside and both see and hear the music reverberating from inside. The howling wolf outside, the stage’s stone wall backdrop, and the arena-style acoustics made for a wildly unique experience.

From our vantage point, the long, blonde maned, copiously tattooed, red leather-clad rocker jamming out on a bright 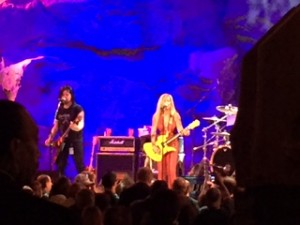 yellow guitar was a vision from the 80s hard rock/metal, hair band scene. Harkening back to her early solo days post-The Runaways (circa late 1970s), Ford jammed hard on the guitar with her growling and raspy vocals; early on screeching out how drawn she is to the “dark side” with her rendition of “Devil in My Head.” And while there is a well-documented, rough history with her former band, the short-lived The Runaways, Ford called them her “all-time favorite punks” as she belted out “Black Leather.” 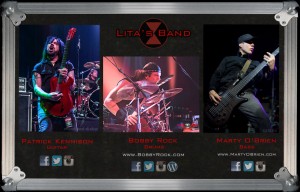 About an hour in, a shirtless and massively muscular Rock let loose in a testosterone-driven, head-banging (he actually used his forehead!), monster drum solo that seemed to go on forever (and who wanted it to end?) Later, the multiply-talented Kennison was a great stand-in for the legendary Ozzy Osbourne (Ford joked that Osbourne “missed the flight”) with Ford on a double-neck guitar in the duet “Close My Eyes Forever.” Shouting out to idols of her youth like Mötley Crüe, Van Halen, and Kiss, Ford showed her softer side with some ballads as well.

True fans abounded, singing and rocking out to the show, cell phones in the air snapping pics and recording their favorites, paying no mind to the surrounding noisy casino. Some members of the audience held banners for Ford, an advocate for parental alienation (a situation where children become weapons between warring parents), as she herself is a victim. Ford and her bandmates stayed long after selling and signing memorabilia and giving photo opps.