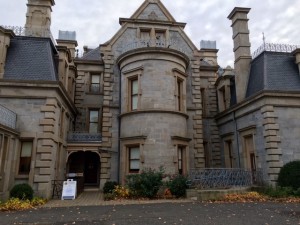 I’m a sucker for ghost stories. The old fashioned kind; the ones that are told around a campfire and creep you out for years afterwards. I grew up devouring Hans Holzer’s real ghosts stories (definitely dated myself with that one). So when we had the opportunity to visit the Lockwood-Mathews mansion (claimed by many to be haunted) in Norwalk, CT, I eagerly jumped at the chance. With my wife, Stephanie, and four of our seven children, we made our way down Route 7 to Mathews Park where the mansion is located.

The mansion was built by financier and railroad baron, LeGrand Lockwood, between 1864 and 1868. It is an architectural wonder, combining Victorian design and post-Civil War Americana. Most of the exterior of the mansion, as well as the furniture and rooms within, have been meticulously preserved and/or restored. Indeed, walking across the threshold is like walking into the past.

We were lucky. They were giving a special Halloween tour. At other points during the year, they have other holiday themed gatherings and events like the Victorian Tea where history buffs and other culture vultures get together and have a tea party while an acclaimed speaker discusses the etiquette of the period.

But on this late October day, the family bravely signed on for the Halloween tour. As soon as we entered the rotunda gallery (a forty-two- foot high octagonal room whose ceiling is a double skylight) and grand staircase, I felt dejavu. But then I realized that parts of both Dark Shadows and Stepford Wives were shot here (two movies which I had seen).

Our hostess/tour guide (a former school teacher I later came to find out) met us liveried in a black mourning dress and veil which was customary at the time when there was a death in the family. As we toured the mansion, she regaled us with historical burial rites and rituals and death stories about famous personages, including Mary Todd Lincoln. At various points during the tour, ghost like beings in period dresses and veils would appear and watch us. These visits were punctuated by doors slamming, moaning and the occasional warning, “Leave my house!” The effect was more creepy than scary and subtle (much better than the haunted house attractions where overly made-up actors jump out and try to scare you). It reminded me of the truly frightening scene in Kubrick’s The Shining when Danny, the psychic little boy, is pedaling his scooter around the hotel and comes upon two little girl ghosts who invite him to “come and play” with them.

Of course, the best parts of the tour for me were the ghost stories. One of my favorites was the one about how the belief in vampires was rampant in the 1860’s. People who wasted away with consumption were thought to be the victims of “undead” family members who sucked the life out of them. In one case, George and Mary Brown of Exeter Rhode Island lost several members to consumption. In an effort to stop the contagion, they exhumed several members of the family and found normal decomposition. But when they exhumed their daughter Mercy, they found no decomposition. Her body had actually shifted in the casket and when they did an autopsy, they found fresh blood. I get the chills thinking about it (someone is walking on my grave!).

All in all, it was an educational, informative, unique and scary experience. The kids certainly enjoyed it as well. Visiting the Lakewood mansion is just my cup of Victorian tea (pun intended). 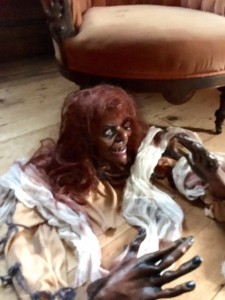 With a crisp October 31 afternoon to fill and the family eager to do something in the spirit of Halloween (pun intended) we checked around for local events that both would please us (the grown-ups) and the gang. We came across the Ghostly Sightings Tour at Lockwood-Mathews Mansion Museum in Norwalk, CT and did a quick search for reviews, finding very little about it; but we took a leap and decided to check it out. About a 45-minute drive for us, this national registered historic landmark is open April through January and hosts a variety of events and tours; the Ghostly Sightings Tours are available only during Halloween week and we were fortunate to snag the final time slot on the final day of the season. Other than a GPS glitch which took us to some dead end around the corner (gotta love technology), we doubled back and found it easily, nestled in beautiful Mathews Park.

From the outside, the mansion is exquisite. Former Secretary of the Interior Rogers C. B. Morton called it “the most sumptuous private home built in America up to that time…a prelude to the opulence of the Gilded Age.” We caught up to the tour a few minutes behind the rest of the group and immediately became immersed in both fact and lore surrounding Victorian death and mourning rituals delivered by a fantastic guide, herself a former schoolteacher, dressed all in black as widows of the time would have worn. The mansion, built by one of the country’s first millionaires, LeGrand Lockwood, is rife with stories about deaths on the property. The first, a worker by the name of Samuel Stevens died during the construction of the “country cottage” when he fell into and chillingly was buried in a bed of mortar; and later, LeGrand himself passed just a short year after the home was finally completed. Four years later, the home was purchased by Charles Mathews, who also died there, just three years after acquiring it. Several other odd deaths also have been reported and many believe, including experts from the Connecticut Paranormal Research and Investigations, there is a great amount of spiritual energy in the home, most notably that of LeGrand and his wife Ann.

Touring room to room on the first and second floors, the mansion is a sight to behold. But in addition to the immense, rich interiors, there were other sights and accompanying sounds. Costumed spirits roamed, ducking in and out of doorways, stairwells and various other parts of the home, often moaning and calling out to us – the unwanted and unwelcome visitors. For the faint of heart (myself included), this adventure was not scary per se, although my 14-year-old stepdaughter locked arms with me throughout the tour. These ghostly presences merely added to the fun of the Halloween holiday. I must say, I learned a great deal about death rituals and mourning, including the true origin of the phrase “Saved by the bell.” Ordinarily attributed to the sport of boxing, its meaning, according to our guide, came from the bells often attached to coffins which could be rung by the recently interred, should they have become revived after mistakenly being buried alive.

The mansion may be grandiose but the staff during our tour was anything but pretentious. From the volunteer who graciously checked us in (albeit 5-10 minutes late) and escorted us to the group, to the tour guide, to the “ghosts” with whom we snagged photos on the grand stairwell post-tour, we felt warmly welcomed. But speaking of photos – we couldn’t have been more surprised when we looked at our photos in the car on the way home. An unknown little boy whom none of us remember seeing during the tour (nor did we see join us on the mansion stairs) was in each of our pictures. This more than odd presence left us with something to ponder! 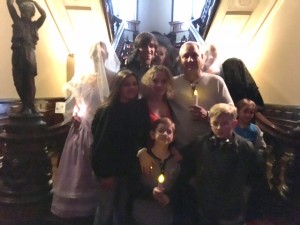 So here we are on the grand staircase with the ghostly visitors.  What’s really strange, however, is that the little boy standing next to me on the far right (just below the woman in black), is not ours!  We have no idea how he got into the picture.  No one remembers him.  If someone can identify him and solve the mystery, please let us know.  If not, we may have to acknowledge that he could very well be one of the real ghostly denizens of the mansion who couldn’t resist a photo op!