Pillow Talking’s Review of A CHRISTMAS CAROL: A GHOST STORY at the Hartford Stage 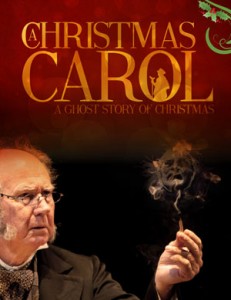 For information and tickets: Hartford Stage

When I was growing up, we had a family holiday tradition. We would watch It’s a Wonderful Life and A Christmas Carol (the 1951 UK film retitled Scrooge starring Alastair Sim) every holiday season. By the time I was an intellectual snob in college and would exhibit my pseudo worldliness by spouting Dickensian euphemisms from A Tale of Two Cities and Bleak House at cocktail parties, I still considered my childhood favorite, Scrooge with Alastair Sim the best interpretation of A Christmas Carol. (And this was true despite the fact that I had seen the 1935 film with Seymour Hicks, the 1938 version with Reginal Owen, the 1970 musical adaptation with Albert Finney, the 1984 television version with the late great George C. Scott – just to name a few.) Out of all the cinematic versions, Alastair Sim remained my yardstick to which other Scrooges were measured. 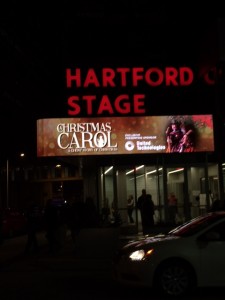 Before we discuss the stellar casting, let’s talk about the amazing staging. Although at the beginning the stage is bare, it magically comes alive with each scene via imaginative props, moveable stage flats, strategically placed fog machines, and trap doors. The carefully designed lighting for each scene with accompanying sound effects enhanced the overall haunting atmosphere (kudos to lighting designer, Robert Wierzel, and original music and sound designer John Gromada).

And the choreography was brilliantly integrated into the scenes. (Yes, there was dancing in this stage drama that fit perfectly.) Not to mention the creative Cirque du Soleil-type wire acts of certain characters that contributed to the eye-pleasing spectacle. (A shout out to choreographer Hope Clarke.) 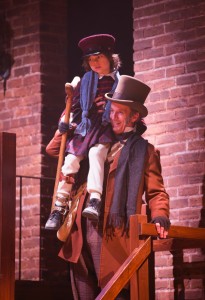 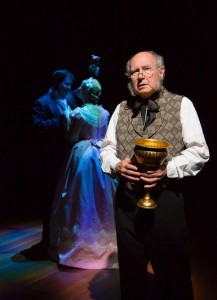 The casting was perfect. Veteran character actor of stage and film, Bill Raymond, was the best embodiment of the character that I have ever seen. Like Alastair Sim, he captured just the right balance of Scrooge’s hard core, mean exterior and the whimsical, boyish vulnerability and innocence trapped inside dying to be set free. This is particularly evident in an imaginary sword fight that Scrooge has, supplying his own sound effects like any young boy would do in imaginative roleplaying.

In a Wizard of Oz-type homage, characters in Scrooge’s present day life doubled as the main apparitions that would take him on his journey to redemption. Stage veteran Noble Shropshire’s performance as both Mrs. Dilber and Jacob Marley is flawless (his training at the Royal Academy of Dramatic Art in London was not wasted). His scene-stealing characterization of Mrs. Dilber was hysterical. The characters of Bert and Spirit of Christmas Present were skillfully played by Alan Rust, whose professional resume is longer than my arm. Last but certainly least, Kristen Adele played her heart out as Bettye Pidgeon, Spirit of Christmas Past, and Old Jo (and she was the understudy!) We also need to give credit to a wonderful supporting cast, Terrell Donnell Sledge (Fred, Scrooge at 20), Michael Preston (Mr. Marvel), Robert Hannon Davis (Bob Cratchit) and Gillian Williams (Fred’s Wife and Belle), Lily Bucko (Fan), Buzz Roody (Second Solicitor) and Charlie Tirrell (First Solicitor, the Undertaker and Mr. Fezziwig). 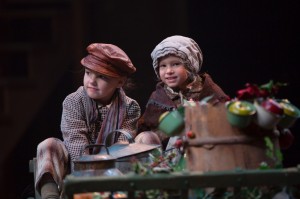 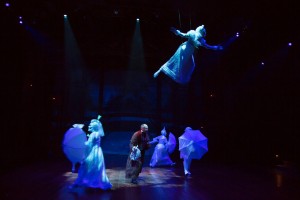 Another understudy who shined in the performance was Riley Lassin who played Mrs. Cratchit and Mrs. Fezziwig. And credit must be given to the Hartford Ensemble – we regret that it would be too long to list them here. It also should be noted that the Hartford Stage made a point of casting local youth actors like Norah Girard, age 5, and Max McGowan, age 7, in the pivotal role of Tiny Tim (and casting other local young actors in the other children’s parts).

If I was a Dickensian purist, I would say that the only thing missing was the background reference that Scrooge disliked his nephew in large part because his beloved sister, Fan, died giving him life, just as the source of disdain for Scrooge from his father was because his wife also died giving him life. But that’s me being overly knit picky – the show was fabulous.

This 18th annual A Christmas Carol: A Ghost Story of Christmas was skillfully adapted and originally directed by Michael Wilson who was the Artistic Director at the Hartford Stage from 1998 to 2011. This production was directed expertly by Maxwell Williams who also has a long history with the Hartford Stage.

We have a new tradition in our family – seeing A Christmas Carol: A Ghost Story at Hartford Stage every year from now on.  There is a reason why it won the Tony Award for Outstanding Regional Theatre – as it acknowledges as a tag line, it’s simply the best theatre, period.

I can remember my first Broadway show – feeling giddy and excited, almost to the point of tears while I sat waiting for it to start. As the lights came up and the sets and characters were revealed, I was in pure rapture; and immediately I was hooked on everything about the theatre. So now that has become my personal gauge of sorts – my meter for which I base my feelings about any show – wherever I am, whatever I see, when I sense the hair on my arms beginning to stand up, I know I’m there, in that same state of unadulterated delight. 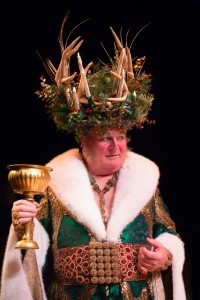 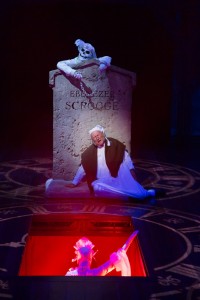 That’s what I felt last weekend from the opening scene of Hartford Stage’s A Christmas Carol: A Ghost Story of Christmas, based upon the classic story by Charles Dickens and directed by Maxwell Williams. And despite the warm Northeast temps making it feel more like early autumn than nearly winter (and the fact that I have barely begun Christmas shopping), spending an hour and a half in the presence of everyone’s favorite bah-humbugger, Ebenezer Scrooge, along with his spectral visitors put me right in the holiday spirit.

This was a first for me – I’ve seen film versions (and in addition to traditional adaptations, admittedly one of my very favorites is Bill Murray’s Scrooged) but never one on the boards. Nor had I ever been to Hartford Stage, which, I might add is a little bit of Broadway in Connecticut.

We immediately noted the sheer perfection of the uncomplicated sets and backdrop; stairs flanked either side of an elevated walkway that allowed for the coming action to take place simultaneously on the floor and up above. Then the magic burst forth in the form of a sizeable and impeccably costumed cast with brilliant and inventive props and moveable set pieces, spectacular lighting, and wonderful music. 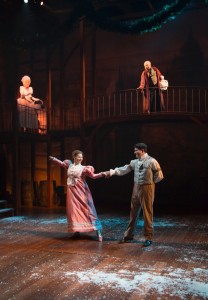 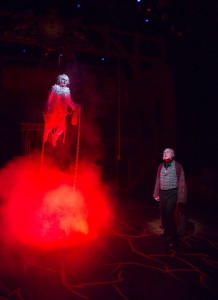 Characters entered and exited from the aisles, the wings, from trapdoors and were lowered from cables overhead. The choreography was well executed (credit to Hope Clarke) and even the flying effects of Jacob Marley and the ghostly apparitions were flawless.

At times eerie yet well balanced with mirth and even giddiness, the entire cast was incredible – but maybe most importantly, what would A Christmas Carol be without a fantastically crotchety Scrooge? Played by Bill Raymond, this effortlessly executed role had me laughing out loud with his well-punctuated doses of whimsy. Noble Shropshire, who doubled as housekeeper Mrs. Dilber and the ghostly Jacob Marley was absolutely hilarious, keeping the audience in stitches, sometimes without having said a thing.

As expected, each of the ghostly visitors: Spirit of Christmas Past, performed by understudy Kristen Adele (who also played Bettye Pidgeon and Old Josie); Spirit of Christmas Present, played by Alan Rust (who also played Bert); and Spirit of Christmas Future captured the essence of Dickens’ tale. The supporting cast which included in part: Michael Preston as Mr. Marvel, Robert Hannon Davis as Bob Cratchit, Terrell Donnell Sledge as Fred and Scrooge at 30, Gillian Williams as Fred’s wife, Gillian Williams as Belle, Riley Lassin as Mrs. Cratchit and Mrs. Fezziwig, and Charlie Tirrell as Mr. Fezziwig, Undertaker and a solicitor, were all spot on. It always is a joy to see children in productions, despite the extra work that goes into making that happen; the young actors, including locals Norah Girard and Max McGowan who alternated as Tiny Tim, filled the stage. (Note: the cast who have not been named only have been left out for brevity.) 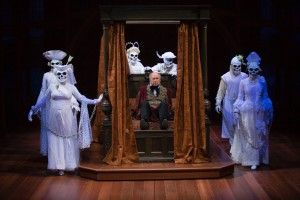 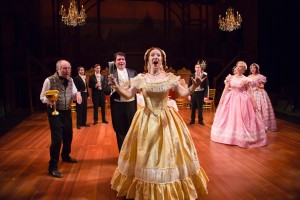 Hartford Stage did an incredibly imaginative and masterful take on the classic, well-loved story of a bitter miser’s epiphany on the eve of Christmas. It also is heartwarming to note that in addition to returning veterans of the production, Hartford Stage gives roles to the graduating class of acting students from The Hartt School, a performing arts conservatory of the University of Hartford. And for the second year, Hartford Stage is offering a Sensory-Friendly performance of A Christmas Carol for individuals living with autism spectrum disorders – where they create a safe and accepting environment in which their patrons can enjoy the show with relaxed house rules and comfortable light and audio.

I hope to be back next holiday season for their 19th year to experience this wonderful production and see both old and new cast take the stage. With the quality of the production rivaling Broadway, it is both affordable and right in our own backyard.

See our other He Said/She Said Theatre Reviews