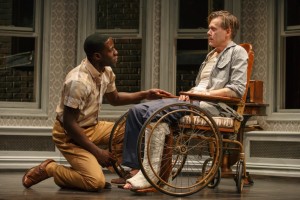 You’ve seen the movie (Hitchcock, Stewart, binoculars, wheelchair) – a classic. Now see the play. Well, that really can’t happen because Hartford Stage has the casting and marketing genius to achieve a complete sell out.

The movie and play share the same title, not much else. Yes, there’s a murder, body parts, voyeurism, and snippets of lives of obscure people. We have our erstwhile hero. Jimmy’s everyman charm has been replaced by a reclusive alcoholic. Where is Grace Kelly or any swell-looking smart blonde to match strategies and banter cute witticism with Jimmy? Albeit, an attractive young African-American man fills that void, but for a completely different purpose that strains the story line. “Rear Window” should stand alone as near-perfect as it is or how it is remembered, without adding broad subtexts of racism, police brutality, power or lack thereof of the press, and homosexuality.

If only Hartford Stage’s play had a different title the audience would have different expectations. This “Rear Window” is essentially a compilation of the movie’s script and the life of its writer, Cornell Woolrich – a man with more than his share of demons. Since few know of Woolrich, the main character is a man who even fewer care about because the text does not give the audience enough to decipher about this man.

It is painful to write any derogatory words aimed at Kevin Bacon — T.H.E. movie star of the memorable “A Few Good Men” and “Apollo 13,” his award-winning “Taking Chance,” and the hysterically funny “Tremors.” Yes, “Tremors.” Bacon throws himself into the role of Hal Jeffries as much as any skilled actor can possibly do. As hurting as Hal is, he is superficial. Bacon needs dialogue to express his character that just isn’t there. It is only in some scenes with McKiley Belcher (a promising actor) as Sam, that the people onstage become…well…real people.

“Rear Window” is film noire set to stage, delivered loud and clear as the screeching rush of trains on railroad tracks and dingy neon marquee against dirty grey bricks create the period. The set is amazing (such an overused word), but no synonym suffices. As the play quickly moves from scene to scene, the staging becomes even more amazing if that can even be possible. The star of “Rear Window” is scenic designer Alexander Dodge, who can share the accolades with sound designer Jane Shaw and lighting designer York Kennedy.

Originally posted In The Spotlight