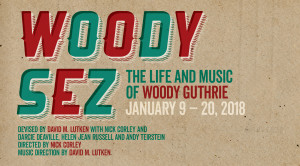 Take it easy, but take it. – Woody Guthrie

Woody Guthrie did for folk music what Elvis did for rock and roll: he used music and song that stretched across generations, ideologies, philosophies and, ultimately, into what were to become bastions of pop culture. Woody Guthrie was before my time, but I knew of him and a little bit about his life and music as a result of three things: I knew and listened to Arlo Guthrie, his son, and knew that he was following, at least musically, in the footsteps of his famous father. I also took guitar lessons and anyone who does for a year or more is bound to run into “This Land Is Your Land,” one of Woody’s most enduring and popular songs – and, coincidentally, a relatively simple song to play on the guitar. (As Woody said, “anyone who uses more than two chords is just showing off.”) The third reason is the Oscar-nominated 1976 film, Bound for Glory, loosely based on Woody’s life and starring David Carradine. (The film also deserves a footnote in history as being the first one in which the Steadicam camera rig was used.)

Woody Sez: The Life and Music of Woody Guthrie at Westport Country Playhouse is an engaging, entertaining, and utterly enjoyable journey through the life and times of this legendary performer. If you didn’t know much about Woody Guthrie before, don’t worry. The show is a fairly tight chronological biography of the man and his career. And if you already were a fan of Guthrie’s music, you can sit back and relax on the train bound for glory and enjoy one stop after another, as Guthrie’s philosophy and incisive look at the lives of the common people play out across the stage.

What’s interesting is how relevant Woody’s music is to the present, especially today’s political climate. I defy anyone – whether he or she is left wing, right wing, or anywhere in between – not to be emotionally moved by songs like “This Train is Bound for Glory” and “This Land is Your Land.” Indeed, Woody’s music bridges political chasms and resonates with the masses. As his close friend, John Steinbeck, once said. “[Woody] sings the songs of a people and I suspect that he is, in a way, that people.” 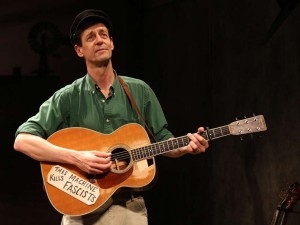 David M. Lutken, the quadruple threat who stars as Woody and one of the devisers of the show, participated in the orchestrations and vocal arrangements, and can play more than two chords on the guitar. He is simply amazing. He makes the perfect case for transmigration of the soul, for the soul of Woody Guthrie unequivocally resides within him. Apart from resembling Woody in his prime, he has a mild-mannered, easy way, but like the train you never saw, comes out of nowhere to kick your butt into the next state.

While this is one of those theatrical pieces that could possibly work as a one-man show, it works three times better as an ensemble because of the added talents of Kate Barton, David Finch, and Leenya Rideout who sing, play characters in Woody’s life and accompany Mr. Lutken on the guitar and harmonica with a panoply of instruments ranging from fiddle to bass fiddle. David Finch also plays a mean pair of spoons that you will eat up (pun intended).

Nick Corley, another deviser of the piece, smartly directs the action so there isn’t a lingering moment that is not put to good use. David Lutken, no surprise, adeptly handles the musical direction of the show. 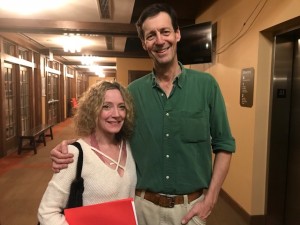 Woody Sez constantly breaks the fourth wall and there is a good amount of audience interaction. I especially like the spontaneous moment in the show when David Lutken, playing Woody, jumps off the stage and invites my wife and co-reviewer to dance with him in the aisle and then proffers his hat for me to tip him. (He did not know we were there reviewing the show.) Like the train I mentioned before coming out of nowhere, I was so flustered and surprised that I could not get my phone out or working in time to get a pic of this magical moment. Alas, the one below after the show with my wife and Lutken will have to do.

All in all, Woody Sez is a wonderful, educational and stimulating theatrical piece of American pie that everyone can savor. Kudos once again must go to Artistic Director Mark Lamos for bringing this gem to our neck of the woods.

I frequently tease my husband (and co-reviewer) when I say that I know a lot of things – but the amount I may know about any of those things varies greatly. I know a lot about some things and far less about others. When it comes to our most recent theatrical endeavor at Westport Country Playhouse about the iconic folk singer-songwriter Woody Guthrie in Woody Sez: The Life and Music of Woody Guthrie, I’d have to say the extent of my knowledge had been quite close to nil. I do recall, however, that as a child, I often sang his infamous “This Land Is Your Land” with gusto – of course, never knowing anything about the man who’d penned it. I can also say it made me feel special – in great part because California is mentioned in the second line and because I was born there (but moved across the country to Connecticut when I was two years old).

It is amusing to me that in the innocence of my youth, somehow I think I had just gotten the message Woody was trying to impart – his words made me feel connected to others, to that far-off state of my birth, and to our entire country. I simply liked the idea that “this land is made for you and me” – that it belongs to us all. He made that little girl in pigtails warbling in the backseat of the car feel important. Woody loved America and that came through in his songs. His entire life was a social and political commentary. He embraced everyone, above all, the underdog, and stood up for what he believed to be right and good, even in some of the toughest times in American history.

But Woody’s own life was nothing short of challenging. A musically endowed and charismatic man, he braved many personal trials and experienced tremendous loss. He was bold and unafraid of speaking his mind – especially in song. He made some bad choices but created a lot of good music. And it is through the journey you’ll take along with him in Woody Sez, created by and starring David M. Lutken (as Woody himself) you’ll find yourself laughing, singing, crying, and at times even a bit shaken as you learn of all the twists and turns Woody’s life took as he traversed this land, until he ultimately succumbed to the tragedy of Huntington’s disease at the age of 55

Lutken’s Woody is warm, engaging, authentic; a true talent and a great dancer – I should know – he plucked me from the audience and danced with me in the aisle! An embarrassing first! His story is a bright collage, told in the first person and infused with hootenanny fervor. The accompanying cast members play multiple characters including many of the women and men in Woody’s life. Bringing them to spirited existence are Katie Barton, David Finch, and Leenya Rideout who, like Lutken, all are quadruple threats as actors, singers, and dancers – but I must say they all truly blew me away with their exceptional musical talents toggling back and forth between multiple instruments including guitar, banjos, bass, fiddle, dulcimer, mandolin, jawharp, autoharp, and even spoons (and I’m sure there were others I missed).

Thank you Mark Lamos, Artistic Director, and Michael Barker, Managing Director, for never disappointing with Westport’s exciting and distinctive choices. For an invigorating night of music, drama, and humor, catch Woody Sez in its limited engagement before it closes January 20!