Pillow Talking’s Review of THE WOLVES 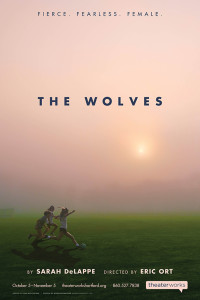 Wolves live in packs of around six to ten animals. Wolves are very social animals. These social animals cooperate on their preferred prey… National Geographic

The true test of the success of any live stage play (or film for that matter) is the ability to lure its audience in and make it feel as if they are voyeurs watching real events play out. Indeed, in medias res, the conceit used most often in classical Greek literature, generally make viewers feel as if they just stepped into the middle of things, without introduction and/or preamble and become immediately consumed with the action playing out before them.

Such is the case with Sarah DeLappe’s The Wolves. It is a play which immediately ensnares its viewers like a Venus flytrap. The audience member (or more aptly the voyeur) is thrust into the middle of the workout of an indoor girls’ soccer team. Sensory overload occurs as multiple conversations and overlapping dialogue accost the audience and challenge our modern narrow attention span to take in the larger picture. The entire action of the play (with the exception of the very end) follows the soccer players as they prepare for their games.  The dialogue is sharp, witty, at times risqué to the point of being downright vulgar, but  at all times rings with such verisimilitude that it is easy for one to forget that he or she is sitting in a theater and not watching a real soccer practice. I know first-hand – my sixteen-year-old daughter plays field hockey and I saw her behavior with her teammates personified to some degree in each and every actress on stage.

Without giving away too much of the plot, we follow the players in their work-outs which, for the most part, are unsupervised by any adults. Consequently, their interactions with each other is real and pure, unfettered by adult bias or opinions. We come to know their quirks, phobias, idiosyncrasies, likes, dislikes, etc. As the playwright herself notes in the program, despite their athletic prowess, intelligence and interactions with each other, they are still enclosed within a metaphorical bubble of sorts – an indoor soccer stadium – which seals and protects them from the evils of the outside world and the vagaries of life itself.

But this is not The Tree of Wooden Clogs – a mere view of a slice of life of a community. Ultimately, The Wolves is a stage play that fits within traditional structural parameters including a rising climax and denouement. It is a coming-of-age story and the death of childhood innocence. A hole in the stadium’s bubble and the allowance of the infiltration of a tufted titmouse (a bird – I looked it up) foreshadows the inevitable and eventual demise of the stadium’s bubble as well as the protective shield of childhood. By the end of the play, we no longer see sweet birds of youth, but young women grappling on the cusp of adulthood and all that it implies.

The acting by the entire cast is stunning. As the playwright notes, “the team moves as one organism made up of nine idiosyncratic individuals.” The cast is a true ensemble, each actress working in sync with one another for the betterment of the “organism” – or in this case, the play itself. Accordingly, to single out any of the actresses for their powerful portrayals would be unfair. Props must be given to the entire cast: Rachel Caplan (#14), Carolyn Cutillo (#2), Karla Gallegos (#00), Olivia Hoffman (#7), Dea Julien (#13), Shannon Keegan (#11), Emily Murphy (#25), Claire Saunders (#8), Caitlin Zoz (#46) and the only “adult” in the play, Megan Byrne (Soccer Mom).

Eric Ort did a masterful job directing a play filled with such subtle complexity and nuances. With his insightful and creative direction, he was able to drill down and tap into to the core of our hearts and emotions. I daresay whether you are a parent or not, this play will resonate and stay with you long after the curtain comes down. The Wolves is a stimulating, provocative, powerful piece of theatre. Kudos to Artistic Director Rob Ruggiero and TheaterWorks for their continued selection and support of the best of theatre.

The Wolves – as its moniker states – Fierce, Fearless, Female – a play which must be experienced.

Join me at my dinner table on any given night and you’ll hear talk about current events, politics, relationships, entertainment, and some idle gossip to boot. This isn’t the stuff of adult conversation, mind you, rather it’s the real chatter of the seven young people of our blended family who far outnumber the “grown-ups” in our home and range in age from 12 to 21 – how many of them in attendance depends upon who’s home and who might also have a friend over. There can be a single topic of conversation or any of a dizzying number of exchanges within smaller subgroups – and trying to listen in and keep up with them can cause a serious case of exploding head (I’ve admittedly copped that from Steve Martin’s Meteor Shower).

And that’s exactly how it felt as a member of the audience at TheaterWorks Hartford’s The Wolves, a spectacular new play by twenty-something playwright Sarah DeLappe, who successfully manages to get to the heart and mind of the “every-adolescent” – at least those of the female persuasion. A gifted author who has written the idiomatic dialogue as if she somehow embodies each and every one of her characters – the threads of their at-times frenzied, illogical, silly, foul-mouthed, socially anxious, competitive, self-doubting, parent-criticizing, striving-to-be-mature consciousnesses. She has finely crafted each of nine 17-ish-year-olds into layered, convincing stand-alone individuals who at the same time are part of a cohesive and collective whole – that of an indoor soccer team known as The Wolves. The pack speaks as adolescent girls do – their speech patterns, their twang and their slang – and DeLappe’s sharp dialogue overlaps throughout much of the production just as you’d expect to hear when you find a group girls chattering away in the school halls or at the mall or holed up in someone’s bedroom. Akin to a magnificent orchestral piece, there are musicians playing the same parts and different parts; there are competing and complementary elements; high notes and low notes; and both order and disorder amid the chaos.

Without actually naming the young women, DeLappe instead refers to each of them by their jersey number – a device which paradoxically serves to keep them niftily anonymous yet clearly identifiable in their distinct adolescent authenticity. Adolescence is notoriously a time when a young person may have an “identity of the month” while they actively explore the process of becoming their adult selves. Each of these young women may illustrate a piece or a part of the adolescent psyche and could be anyone and everyone – today, tomorrow, or next month.

But beyond DeLappe’s brilliant conception is TheaterWorks’ presentation – expertly directed by Eric Ort, he conducts this orchestra, or rather, coaches this soccer team, with pure brilliance, giving each player her moments to shine. Very much like The Breakfast Club, The Wolves is infused with certain classic social stereotypes which are convincingly depicted by an uber-talented group of young women. And as sure as watching The Wolves is like sitting at my dinner table – you never know what’s going to happen next.

In perpetual motion, the players work out and stretch and run and kick around the soccer ball as they prepare for the game – or maybe for life – or perhaps both – and they talk amongst themselves non-stop. They butt heads and they support one another. They trash talk and they deliver compliments. There are best friends and rivals. They are inclusive and divisive. There are the bubble heads, the boy crazies, the home-schooled, and a yurt-dwelling world traveler. Sprinkled among the discussions of current events and genocide are boyfriends, “Plan B,” and college recruitment. Someone may or may not have had an abortion. Someone may or may not have an eating disorder. Someone may or may not be gay. Yes, it’s the realities of life among the millennial or Generation Z set (depending upon which stats and moniker you favor).

But like every good story – something hits the fan (do they have fans in an indoor soccer dome?) – and it completely knocks the wind out of you. DeLappe keeps the suspense building, playing on your emotions as you try to keep your composure until you ultimately discover what has happened – then you’ll lose it entirely. It also strikes you that these young people, fictional as they may be, are hurting far worse than you, the onlooker, as they grapple with the gravity and intensity of the situation. Most of them have not yet experienced the weightiness and solemnity that life sometimes brings. But I’ll say no more – you need to experience it.

As we observe them for the mere 90-minute production, life only occurs for the nine within the confines of the dome – it is a static set and a beautifully constructed one at that; kudos to Mariana Sanchez. But there is more – so much more that the young women experience and which impacts their existence outside the dome. Each of the exceptional actors who portray the members of the soccer team brings incredibly nuanced dimensionality to The Wolves and truly honor DeLappe’s masterful work. They are: #14, Rachel Caplan; #2, Carolyn Cutillo; #00, Karla Gallegos; #7, Olivia Hoffman; #13, Déa Julian; #11, Shannon Keegan; #25, Emily Murphy; #8, Claire Saunders; and #46, Caitlin Zoz. It is in all ways an ensemble cast with every individual contributing more than her share to the gestalt – the whole that is far and above the sum of its parts. And while the majority of the production takes place with only casual references to some of the adults who are central to the young women’s lives, one “Soccer Mom” enters the sacred dome with dramatic poignancy at the end – an incredible performance by Megan Byrne.

Shout-outs must go to Blair Gulledge for costume design; Rob Denton for lighting design; Karin Graybash for sound design; Leah Loukas for wig design; Erica Jensen (CSA)/Calleri Casting; Taneisha Duggan as Assistant Director; Bridget Sullivan as Production Manager; and Kate J. Cudworth as Stage Manager. As always, Producing Artistic Director Rob Ruggiero kicks a winning goal with The Wolves. We’ve come to expect that the theatrical works he presents at TheaterWorks will be powerful, affecting, often daring and ambitious, and each time thought-provoking – the kinds of productions that lead to dynamic car-ride-home conversations and those that stay with you long after.

A tremendous opening to their 32nd Season, The Wolves is as the program describes: Fierce. Fearless. [and irrefutably] Female.