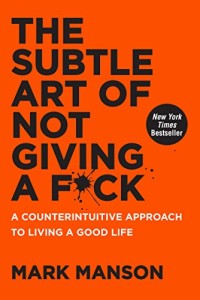 The Subtle Art of Not Giving A F*ck

It seems today that the bestseller lists are littered with titles containing the seven words that even George Carlin was banned from saying on radio back in the day: You Are a Badass and The Subtle Art of Not Giving a F*ck, to name just a few. For those of us who still love to browse brick-and-mortar bookstores, smell the distinctive aroma of compressed pages between dust jackets, and sample face-outs of the trending bestsellers, the latter title – The Subtle Art of Not Giving a F*ck is certainly an eye-catcher. Apart from the F-bomb in the title, you have bold, black letters against an orange background that’s brighter than a Jack-o-Lantern sitting atop a bonfire.

Okay, I admit it. Both the cover and the title stopped me dead in my tracks. That fact that it was a New York Times Bestseller helped. I picked it up and read the jacket cover. I was unfamiliar with the author and his bio didn’t help: Mark Manson, a self-proclaimed potty-mouth blogger from Boston. Hmmm…

But there must be something other than the title and the bright orange cover that would make it a bestseller – right? It is about 200 pages in the hardcover edition and it seemed like a quick read. And, most important of all, the price was right – my son Dylan told me I could pick out any book for my birthday.

The subtitle is certainly an appropriate one: A Counterintuitive Approach to Living a Good Life. At least for the first quarter of the book, the approach is exhaustively delineated by all the things one should not give a f*ck about. In so doing, according to Manson, one actually will end up succeeding. Counterintuitive? Yes. Existential? Yes. Logical? No. That means we should just not give a f*ck about anything and all of our dreams, goals, and bucket list items will magically materialize. Following this mentality, Sisyphus, who was eternally condemned to push a boulder up a hill only to have it roll back down, could instead find that it magically stayed atop the hill simply by not giving a f*ck.

But that does not make any sense – nor does the book, as a whole, advocate such a ridiculous thesis. As noted, the first quarter of the book does tell you not to give a f*ck about practically everything (using enough F-bombs to take out not only North Korea, but North and South America as well). But then there is a subtle metamorphosis from a strict doctrine of not giving a f*ck about anything to not giving a f*ck about most things so that you can save your f*cks for the really important things. As Hamlet said, “there’s the rub,” and The Subtle Art of Not Giving A F*ck falls into the category of every other self-help, motivational and inspirational treatise spouting positive advice, downplaying the negative, concentrating on the important things, and living in the moment.

That’s not to say that there isn’t gold in them thar hills and that the pages cannot be mined for valuable nuggets. In fact, to a large extent, many tenets of Buddhism are sugar coated under the wrappings of giving and not giving f*cks. The author makes direct references to Buddhism and even recounts the story of how Buddha became Buddha.

The bottom line is that life sucks and then you die, so you better make the most of each and every moment. The only constant in life is change and one must roll with the punches or, like the downtrodden Sisyphus, be forever damned to pushing life’s boulders only to have them roll back and crush you. There also is sage advice about letting go and the importance of saying “no” at times.

In many ways, the book is reminiscent of Richard Carlson’s Don’t Sweat the Small Stuff. The only thing that bothered me about Carlson’s book was the subtitle: …and It’s All Small Stuff. That, unfortunately, is simply not the case in life. I know. Among other things, I have a son with Duchenne muscular dystrophy and that is not small stuff by anyone’s calculations. Manson’s book recognizes that there are things you need and should give a f*ck about – it’s all a matter of priority.

So the question comes down to whether or not a reader should give a f*ck about Mark Manson’s The Subtle Art of Not Giving a F*ck. In this reader’s opinion, Manson’s book is indeed worth a f*ck.