Pillow Talking’s Review of THE STING — The MUSICAL 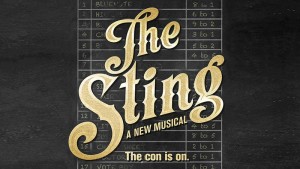 In preparation for seeing Paper Mill Playhouse’s world premiere of The Sting: A New Musical, my husband/co-reviewer insisted we watch the 1973 film version of The Sting starring Paul Newman and Robert Redford. He likes to chide me for not having seen some of the classics and this was one of them. Certainly, it was impossible for him to fathom how I’ve gotten through all my 29 years (wink, wink) without watching it. And so we did. And I loved it.

But that doesn’t tell the whole tale – because in truth, I didn’t want to watch it beforehand as I do love the elements of surprise I experience when seeing a production for the first time. And since the very next day we were setting off to see the musical at the regional Tony-winning theatre in Millburn, NJ, I’d feared I wouldn’t be going into it with fresh eyes. I thought I would know the whole story as it was to unfold. But, I was wrong. Because as many transitions from screen to stage (or vice versa) will be, they are unique and different from one another – and this was no exception. With book by Bob Martin, music & lyrics by Mark Hollmann & Greg Kotis, and additional music & lyrics by the one and only Harry Connick, Jr., there is a smashingly good time to be had. 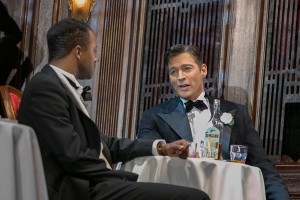 And I’ll repeat that – there’s a smashingly handsome lead – oh, sorry, that’s not what I said, was it? You must forgive me, I’m still star struck…The Sting boasts none other than Mr. Harry Connick, Jr. as Henry Gondorff, the character portrayed by Newman, but I digress. (Disclaimer: my husband is convinced I have a crush on Harry. My only crush is my husband, but I decided I would go ahead and taunt him anyway!)

So for those of you like myself who’ve never seen the Newman/Redford multiple Oscar-winning spectacle, The Sting transports you back to a bygone era – to 1936 Chicago, smack in the middle of the Great Depression where burlesque, racketeering, cons, and corruption are rampant. When small-town, little-fish grifter Johnny Hooker (J. Harrison Ghee) meets big-time, big fish (and “retired”) Gondorff, worlds collide. On the run from the law and for his life after conning the wrong guy – a courier for the corrupt, vicious racketeer Doyle Lonnegan (Tom Hewitt) – Hooker seeks assistance from Gondorff and the two, along with a host of colorful other cons, concoct an elaborately sumptuous scam to take down the seedy Lonnegan. 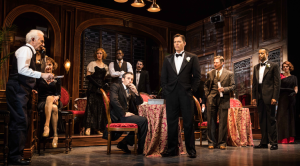 With Connick at the helm, you’ve got smarm, charm, and the smooth crooning that’ll absolutely knock your socks off. And he delights as he takes to the ivories multiple times. Opposite Connick is Ghee who’s no stranger to the stage, having recently debuted on Broadway in Kinky Boots – albeit as a completely different type of character (he was the understudy for drag queen Lola). They have excellent chemistry and fully embody each role. These two are incredible but aren’t the only ones who light up the stage. Kevyn Morrow as Luther is both the narrator and an integral character – a friend and mentor to Hooker, it’s through him that Hooker and Gondorff connect. Tom Hewitt as Lonnegan is flawless as the man you love to hate. “Friend” to Gondorff, Billie, played by Kate Shindle is incredibly dynamic as is Janet Dacal as the sneaky Loretta. Robert Wuhl as the bumbling Lt. Snyder is terrific. And Pillow Talking loves Richard Kline as Kid Twist whom we’ve seen before on both stage and TV (in Connecticut Repertory Theatre’s Spamalot and as Three’s Company’s Larry).

A production of this caliber couldn’t materialize without expert direction, a terrific execution by John Rando and choreography by Warren Carlyle. Additionally, a hand to Fred Lassen as Music Director & Vocal Arrangements; Doug Besterman for orchestrations, and David Chase for dance music arrangements. Of course the delight of theatre goes beyond a great book, music & lyrics, and dynamic acting performances. Scenic design by Beowulf Boritt, costume design by Paul Tazewell, lighting design by Japhy Weideman, and sound design by Randy Hansen round out the major parts of the gestalt. Kudos also to Charles G. LaPointe for hair & wig design, Cookie Jordan for makeup design, Robert Westley as Fight Coordinator.

The Sting may be new to the stage, but the story isn’t – whether you’ve seen Newman and Redford in the silver screen vehicle or not, this is a rollicking ride that’s destined for The Great White Way. Catch it now while you still can at the beautiful Paper Mill!

Adapting iconic non-musical films into Broadway-quality musicals is a double-edged sword at best and can yield a mixed bag of results. Of course some of the most well-known and famous successes is Pygmalion to My Fair Lady (interestingly the now iconic musical was based on the film Pygmalion which was adapted from George Bernard Shaw’s work); The Producers, Dirty Rotten Scoundrels, Hairspray, Sister Act, Little Shop of Horrors, to name a few. Then there are the shows that have withstood the test of time: e.g., Dirty Dancing, The Bodyguard, Saturday Night Fever, Spamalot, and Shrek – The Musical. And of course, the misses, like Rocky, Carrie, and Ghost. Obviously, even the attempt to adapt The Sting, which had two of the biggest stars of its time, Paul Newman and Robert Redford, incredible supporting character actors including Charles Durning, Robert Shaw, and Harold Gould, and a killer of a screenplay by David S. Ward, rivals one of the seven labors of Hercules. Indeed, The Sting’s sequel (The Sting II) fell flat on its face despite the presence of Jackie Gleason and Mac Davis (I know, some of you are probably saying Mac who?). To pull off a successful adaptation of a film like The Sting, you need to stack the deck with a bunch of aces. 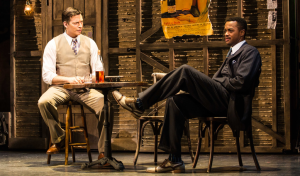 I am happy to report that Paper Mill Playhouse’s world premiere of the musical adaptation of The Sting is filled with aces and has a hotter deck than that of Henry Gondorff, the lead character. The first ace is an excellent book by Bob Martin which, while following the plot of the film, has its own unique nuances and surprises. The second ace is a lively score with music and lyrics by Mark Hollmann and Greg Kotis, foot stomping choreography by Warren Carlyle, and tight direction by John Rando. The third ace is having a stellar cast made up of veteran stage and screen stars including Richard Kline, Robert Wuhl, Tom Hewitt, Peter Benson, Janet Dacal, Christopher Gurr, Kevyn Morrow. In an interesting casting sleight of hand, the role played by Robert Redford in the film was entirely reworked and recreated by the versatile, talented, and relative newcomer J. Harrison Ghee (a star definitely on the rise). The fourth and final ace, of course, is throwing in a complete ringer for the Newman character, a multiple Grammy and Emmy winning, Tony-nominated actor, singer, musician, and composer (who also provided additional music and lyrics) – Harry Connick, Jr. Throw in a king kicker that includes great scenic design (Beowulf Boritt) and costume design (Paul Tazewell) and you have a hand (or show in his instance) that cannot be beaten except maybe by a royal flush which would require that the original film to have a comparable musical score and have Newman and Redford hoofing it around.

The story involves a couple of small time grifters who inadvertently con a numbers runner for Doyle Lonnegan, a big-time racketeer. When Lonnegan cruelly assassinates one of the grifters to make an example out of him, his partner enlists the aid of an infamous washed-up con man, Henry Gondorff, and entices him to set up a sting to get back at Lonnegan. The moral, of course, is to get mad rather than even and though conning the Machiavellian Lonnegan out of a big chunk of change is not tantamount to eye-for-an-eye justice, as the character of Hooker says, “it’s almost as good.” 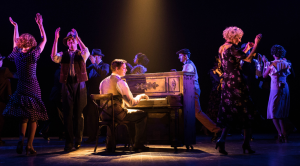 Due to the pedigree and iconic stature of the original film, there is no question that the play is designed as a star vehicle. And Harry Connick, Jr. is a star with broad shoulders that can more than handle the film’s possible shadow. Despite his international fame, Mr. Connick (very much like Tom Hanks) comes across as a charming everyman to whom people can easily relate. Indeed, rather than trying to emulate Paul Newman’s wry performance, Mr. Connick chooses a lighter tact and makes the role his own. His comedic timing is particularly evident in the card game on the train when he outcheats Lonnegan. He is hysterical. And let’s not forget that unlike his predecessor, Paul Newman, Mr. Connick sings, dances and plays a mean piano like the character of Jerry Lee Lewis in Million Dollar Quartet.

All in all, the con is definitely on and the audience is an easy mark. You will be beguiled, engaged, and thoroughly entertained by this new musical adaptation of The Sting. The only drawback is its short run, so you must see it before the horse race ends and everything will be jake.