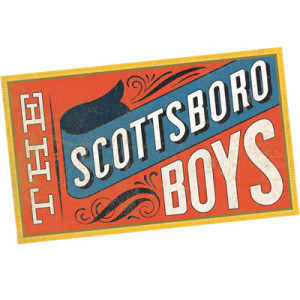 Every so often you’re given the opportunity catch a production that is so utterly affecting, so scorchingly disarming, it draws you in and doesn’t let you go. Every so often you catch a production that, from start to finish, is an astonishingly inspired, brilliant work that speaks to your heart – and perhaps it even validates for you your love of theatre. Theatre at its core is storytelling – and The Scottsboro Boys is among the most intense, beautiful, heartwrenching, and authentic pieces of musical stage work you’ll find. And Playhouse on Park, in its modestly intimate grace, brings you a stellar production that will stay with you long after the lights go up. 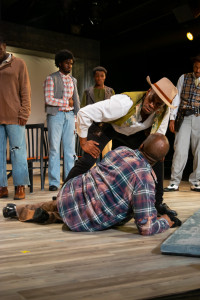 In dramatic simplicity, The Scottsboro Boys, expertly directed by Sean Harris and choreographed by Darlene Zoller, is presented with a minimal set design, for the story itself is razor sharp and slices its way through the boards. The company of multi-talented actors are spot-on, presenting a work that is so powerful, every word, every gesture takes you down for the count. The Scottsboro Boys, like a razor, has another edge — it is told in minstrel style, reverse if you will, revealing the revolting truths of racism in the 1930s and 40s South (and that which often still divides so many of us today).

For those who don’t know of the plight of the Scottsboro Boys (and I’ll openly admit I’d been among them), it’s the very real story of the landmark case of nine black teenagers, ranging in age from 13 to 19, who were falsely accused of raping two white women aboard a train traveling through Scottsboro, Alabama in 1931. The youths were hoboing on the train in hopes of securing work. But when a matched set of brainless white women who’d been nabbed for prostitution needed an easy escape from the law, they allowed the boys to take a heavy fall and become a distraction from their own unsavory pursuits.

The entirety of the musical from this pivotal point forward retells how the nine young men must deal with the ineptitude of the legal system in providing them with a proper defense, rooted mainly in the notion that blacks hardly deserved to be defended. One may wonder how the issue of racism, as well as how these youths managed to survive years in prison with the threat of the death penalty for a crime they didn’t commit could become good fodder for a musical, but in my humble opinion, the work of John Kander & Fred Ebb (Music & Lyrics) and David Thompson (Book) is downright brilliant. The Scottsboro Boys is seamless, singeing, and soaringly superb. 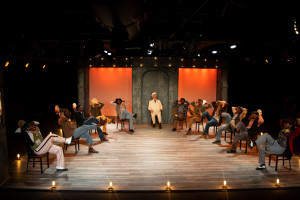 The “Boys” themselves have been crafted as individual, three-dimensional characters who also act as a powerful collective whole. Troy Valjean Rucker is riveting as Haywood Patterson, the bright, hotheaded leader, who always stands up for truth. His moral center shines as bright as the Alabama sun around which all the other boys revolve. Justin Sturgis as Roy Wright and Jerry Hamilton as Andy Wright are terrific as a pair of bonded brothers. Trishawn Paul as Eugene Williams is fantastic as the poignantly naïve, youngest of the group. Cedrick Edkra is terrific as Clarence Norris, the bully, and also as the Preacher. Alex Robertson is great as the quiet Willie Roberson. Jaylan Evans does exceptional double duty as Ozie Powell and Ruby Bates, one of the Boys’ accusers. Grant Reynolds as Charles Weems and Victoria Price, the other prostitute, is also outstanding. Cedric Greene is wonderfully weaselly as the myopic Olen Montgomery who rubs you the wrong way when he’ll say anything to get out of trouble.

Dennis Holland, the only man not of color, is exceptional as the Colonel Sanders-esque Interlocutor whose saccharin caricature of the bigoted Southern white man makes you want to get up out of your seat and smack the smarmy grin off his face. He’s also equally as excellent as the Judge and the Governor of Alabama. Ivory McKay and Torrey Linder as Mr. Bones and Mr. Tambo, respectively, are completely phenomenal as the minstrel “end men” who also play hateful prison guards, a southern sheriff and lawyer, and Samuel Leibowitz. As the minstrels, they sing, dance, tell awful jokes, and will make you want to do well more than smack them, if truth be told.

It bears repeating. There are shows that grab you, force your eyes open, and pump your blood through your veins. They captivate, all the while reminding you why theatre is so important. Playhouse on Park’s The Scottsboro Boys is one such production. It’s simply not to be missed.

It is plays like The Scottsboro Boys, The Andersonville Trial, A Few Good Men, and Inherit the Wind, to name a few, that represent cautionary tales of our unbridled historical ethnocentrism and racism. To say we, as humans, have a checkered past when it comes to tolerance and inclusion is a gross understatement at best. Indeed, it is precisely a play like The Scottsboro Boys that reminds us of the scars of the past and serves as a warning for the future. 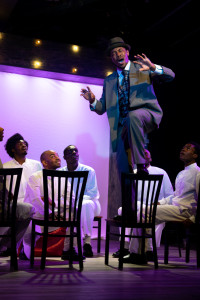 The play is based on the real-life trial of nine young black men who have been accused of raping two white women while on a train bound for Memphis in 1931. One version of the event is that at a train stop, the women jump off and the police recognize them as prostitutes; they try to deflect attention by accusing the group of black men of rape. Of course, in 1931, this sets off an avalanche of racism, bigotry, and divisiveness between black and white, north and south. The young men were riding in a boxcar on their way to Memphis when the incident occurred. They were arrested and, as a result of ineffective counsel, were found guilty and sentenced to death. What followed were years of protests by various organizations, stays of the death penalty, re-trials, and landmark legal cases regarding rights to a fair trial. While the death penalty eventually was avoided, the debilitating aftermath of the case would haunt the legal system for years and the entire incident is often cited as one of America’s major miscarriages of justice.

Adapting such a story to a stage play was a monumental task; making it a musical, however, was herculean in nature. The book was written by David Thompson with music and lyrics by John Kander and Fred Ebb (a team which had a number of successful collaborations together including Cabaret). The play was originally directed and choreographed by Susan Stroman. Although the play only had a two-month run on Broadway in 2010, it was nominated for twelve Tony Awards – but won none – things that make you go hmmmmm. Kudos to Playhouse on Park for resurrecting (or maybe reviving is a better word) such a significant theatrical piece and doing such a great job with it.

The play is framed as a minstrel show with all African American actors except for one – the Interlocutor who is competently played by Dennis Holland (who also triples as the Judge and the Governor of Alabama). For a show like this to succeed, the whole has to be greater than the sum of its parts. That being said, the individual parts must work completely in sync. This is the case here; the casting and acting are pitch perfect. Each of the actors playing the Scottsboro Boys distinguish themselves and make their individual parts their own. Yet, their characterizations work as unifying theatrical elements which forge a tight, layered ensemble. The Scottsboro Boys are played by Troy Valjean Rucker (Haywood Patterson), Justin Sturgis (Roy Wright), Jerry Hamilton (Andy Wright), Trishawn Paul (Eugene Williams), Cedrick Ekra (Clarence Norris), Alex Robertson (Willie Roberson), Jaylan Evans (Ozie Powell), Grant Reynolds (Charles Weems) and Cedric Greene (Olen Montgomery). Shout-outs must go to the other actors including Renee J. Sutherland (The Lady) and Torrey Linder and Ivory McKay who tripled and quadrupled parts, giving each incarnation something unique and different.

Sean Harris did an outstanding job of directing this play and navigating the rough waters of a very large cast in a tight, three-quarter in the round stage set up. The pacing was brisk with a seamless integration of highly dramatic moments and engaging musical numbers. The irony as well as the symbolism that this blight on America’s history was set in the framework of a minstrel show (somewhat of another embarrassment to our early theatre) was icing on the proverbial cake.

The Scottsboro Boys is an electrifying piece of theatre, made more hauntingly so by the fact of its authenticity and its legacy. Indeed, it remains today a relevant reminder of the dangers and injustice of bigotry, racism and the flaws in our justice system.