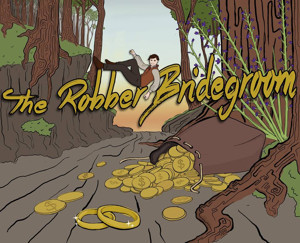 For Tickets and information

“If you see the magic in a fairy tale, you can face the future.” – Danielle Steel

What if you took the old show Hee-Haw (Laugh-In’s country version) and added the character of Robin Hood with the darker elements of the relatively new TV show Once Upon a Time and the film version of Into the Woods? Somewhere in that mix would be Broad Brook Opera House’s wonderful version of the underperformed musical The Robber Bridegroom.

If truth be told, The Robber Bridegroom’s two runs on Broadway and one run Off-Broadway represent somewhat of an anomaly when you consider the elements of the show – bluegrass and country style music (the New York Times Critic Clive Barnes in 1975 called it “country and southern”); an ensemble and/or band who remain on stage throughout the play; the hootenanny-style framework of the staging; and the surreal plot. Indeed, as Robert Lunde, the bold director who took on this complex play says in his Notes, “[Broad Brook Opera House] IS the perfect setting for a barn theatrical.” Nevertheless, the play, with book and lyrics by Alfred Uhry and music by Robert Waldman (adapted from the novella by Eudora Welty) did play on Broadway and featured such past cast members as Raul Julia and Barry Bostwick.

Like most fairy tales, the story involves a convoluted journey to a happy ending, complete with mistaken identities, farcical and supernatural elements, and, of course, a hero and heroine with a match made in heaven – or at the hands of a wealthy father. The setting is the folkloric tales of 18th Century Mississippi, The legendary character, Jamie Lockhart, is an apparently honest, upstanding member of the community who saves the life of one of the richest men in the area, Clement Musgrove, and for his reward, gets to marry his daughter, Rosamund. Little does anyone know (except the audience) that Lockhart, like Dr. Jekyll, has an alter ego known as The Bandit of the Woods who robs the rich and ultimately seduces Rosamund. Throw-in some bad guys like Little Harp (a thief and scoundrel) and his older brother Big Harp (a decapitated but talking head), a wicked stepmother named Salome, a guileless wannabe named Goat, and away into the woods we go. Act I was a bit confusing with so much going on at one time, but by Act II, characters, story lines, themes and motifs were all clarified and familiar.

The Opera House Players returned to their stable of multi-talented actors to pull off this theatrical piece. Veteran lead actor Michael Graham Morales gave his usual charismatic and charming performance as Jamie Lockhart/The Bandit of the Woods. Pillow Talking has reviewed favorably his past performances at Broad Brook in She Loves Me and Into the Woods. Newcomer to Broad Brook is the versatile KK Walulak who plays Rosamund with the perfect mix of naivete, sensuality and independence. KK and Michael are a perfect casting match and have great chemistry together. Rodney K. and Mark Proulx make a great comedy duo as the lovable baddies Little Harp and Big Harp. Rodney K., whose performances Pillow Talking loved in Man of La Mancha and Avenue Q is building a solid foundation of acting repertory work. The same can be said of Mark Proulx as Big Harp. He is hilarious as the decapitated but nevertheless animated and vociferous talking head and steals many a scene – not an easy task for an actor whose head is the only visible part. Lindsay Botticello is convincing as the wicked stepmother Salome (who also

was equally convincing as the Witch in Into The Woods). Ms. Botticello assures us in her bio that “she would make a terrible villain and that she is really a very nice person once you get to know her.” No stranger to Broad Brook, Tim Reilly gives his usual solid performance as Clement Musgrove. Julianne Thouin gives a fresh and invigorating performance as the misguided but likeable Goat. Shout-outs also must go to a great Ensemble: Aimee Meunier, Joshua Hamre, Joshua Prouser, and Reva Kleppel. A special shout-out goes to Tara Kennedy who was not only part of the Ensemble but cawed and clawed her way around the stage as the Raven (her death scene as the Raven was particularly memorable – Nevermore!).

Broad Brook’s The Robber Bridegroom is a fun-filled performance for the whole family. A big thank you has to go to the theatre for selecting this underperformed and little known gem of a play.

Interweaving the hilarious with the hokey, the mocking with the madcap, even the curious with the (slightly) creepy, it’s the uncommon and unconventional Southern gothic fairytale The Robber Bridegroom, based on the 1942 novella by Eudora Welty, which currently graces the stage of Broad Brook Opera House. With book and lyrics by Alfred Uhry and music by Robert Waldman, this larger-than-life performance received its artistic direction by Robert Lunde, musical direction by Steve Kaminski, and choreography by Amy Bouchard.

Like most fairytales, The Robber Bridegroom is a heaping dose of good vs. evil; and in this one you’ll also find the requisite fair maiden, the wicked stepmother paired with a slightly obtuse daddy, and the handsome bandit ready to sweep the lady of the manor off her feet (maybe). Toss in love (and lust), naïveté (and nonsense), mistaken identity (and intentional deceit), and a whole gaggle of bumbling ne’er-do-wells and what you end up with is a rollicking if not offbeat good time. 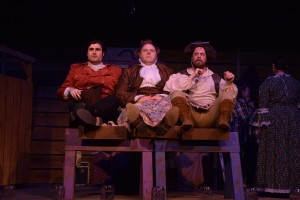 Enter Jamie Lockhart (Michael Graham Morales), a “gentleman robber” whose motto is that he only steals with style. Hidden agendas aside, he slyly comes to the rescue of wealthy plantation owner Clement Musgrove (Tim Reilly) and protects both him and his bag full of money from rascal brothers Little Harp (Rodney K.) and Big Harp (Mark Proulx). In gratitude, Musgrove extends an invitation to Lockhart to come to his home for a meal along with an introduction to his single-but-looking daughter, Rosamund (KK Walulak). But before this occasion comes to pass, Rosamund has met and fallen in love-at-first-sight with shady but handsome and beguiling “The Bandit of the Wood.”

It’s not exactly a spoiler to divulge that Lockhart and The Bandit are one in the same – because we as the audience are in on the “secret” almost from the get-go. But that’s not the only case of mistaken identity, for sweet Rosamund also finds a way to disguise herself in an effort to rebuff the pursuits of her father’s guest. She appears before him rather odd and unappealing if truth be told, all because she prefers the unnamed, bad boy from the forest – the bandit who’s “masked” his identity with berry stripes across his cheeks.

Aside from the wretched if not bizarre Harp brothers, other foils also wind their way around the Natchez Trace in zany 18th century Mississippi, including Salome, the ugly and envious second wife to Musgrove, who’ll do anything to rid herself of Rosamund, including having her killed. For this task she foolishly enlists in the aid of doltish Goat (Julianne Thouin) who’s so stupid he could throw himself on the ground and miss. From this point forward, fasten your seatbelts because a whole lotta thievin’, mayhem, and murder are about to ensue! 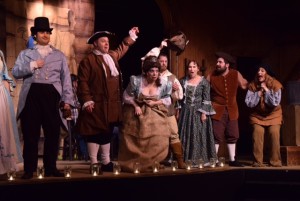 Morales is fabulous as Jamie Lockhart. He’s equal parts charmer and rogue, and he uses this to his full advantage not just with Rosamund but also in breaking the fourth wall and pulling in the eager audience. KK Walulak as Rosamund is delightfully charismatic as the loveable lying, bored, sex-crazed damsel-in-not-so-much-distress. Lindsay Botticello is a fabulous Salome, playing with verve the greedy and ruthless stepmonster you love to hate. Tim Reilly hits all the right notes as Clement Musgrove, the doting dad and far too tolerant husband. Rodney K. is excellent as the dastardly “Little” half of the Harp duo; and Mark Proulx provides numerous and quite cerebral laughs as the “Big” half of the pair. Julianne Thouin capably and humorously takes to the task of the dimwitted boy, Goat. Reva Kleppel is terrific as Goat’s mother (and Ensemble) and Tara Kennedy brings on the laughs as both Goat’s sister Airie and the cawing Raven (and Ensemble). Shout-outs also to the rest of the Ensemble: Aimee Meunier, Joshua Hamre, and Joshua Prouser, for without whom this raucously exuberant folly would not be complete.

With a simple set design and some very inventive props, the action on stage never brakes. Kudos to director Lunde who also is responsible for set design; and Francisco Aguas for managing set construction (and the countless hands that went into its construction). Nods also to Moonyean Field for costumes, Diane St. Amand for lighting design, and Andrew Small for sound. And no musical would be complete without the fabulous orchestra – director Kaminski on keyboards and accordion, Ron Calabrese on acoustic guitar, Bill Baronas on guitar 2, Dennis McCorkle on banjo/mandolin, and Katie Morin on fiddle.

It’s always a sure bet that the Opera House Players will bring a phenomenal theatre experience to its audience and this time is no exception. And it’s always a hoot (or a caw) when you get to see something a bit quirky and off the beaten path!