Pillow Talking’s Review of THE RIVER 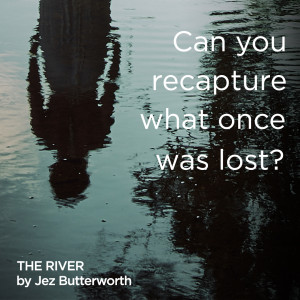 Not all theatre is literal and therefore, often audience members walk out of a production scratching their heads. Sometimes that makes for the best of experiences, providing opportunities for dialogue and individual interpretation; other times it is frustrating, leaving us wanting de facto explanations. But there’s the rub – for it’s even the playwrights themselves who may not have answers and that vague and ambiguous theatrical conclusion has been purposely presented without concern or regard for the befuddlement and bewilderment it bequeaths.

Jez Butterworth’s The River is one such production. Having seen it twice as well as hearing the buzz from other theatregoers following both the Hugh Jackman vehicle on Broadway as well as TheaterWorks Hartford’s version, I may only be a hair closer to “getting it.” But that’s entirely okay, because that is just one of the many reasons I love theatre. I love how personal the experience can be and I love when a piece makes me ponder its meaning long after the lights go up.

TheaterWorks’ The River is both mysterious and compelling, presented in a perfect space that is intimate and entirely immersive. Butterworth’s dialogue is at the same time eloquent and wry; and the acting is altogether electric yet alternately unsettling.

When a trio (two women and a man) engage in one of life’s most complex of tangos – the tangled ending of old love and moving on to new – it’s like one déjà vu moment after another for the man known only as “The Man.” The seemingly simple life he leads, in a cabin by a river where does little more than fish for sea trout, is ironically riddled with complexity. But this convolution may be more of a challenge for his lovers (and the audience) than it would appear to be for him. One woman, “The Woman,” shares his bed, his table, and his fishing poles just before (or is it after?) another woman, “The Other Woman,” does the same. But the two women are not the same – or are they? Could they be different sides of the same woman? Is he a womanizer? Simply just a fantasizer? Possibly a killer?

No matter what, the Man and his odd proclivities, as well as the events which take place both inside the cabin and at the cliffs by the river, are entirely unnerving. There’s heated talk about the rightful owner of a pair of gold earrings and a red dress. There are books, sketches, and gutted fish. There are disappearances and reappearances. In all, The River is a twisted tale of love, loss, rebounds and/or rediscoveries…but who really knows? Does it matter?

Billy Carter breathes calm, cool (maybe calculated) life into the myriad layers of The Man. And while The River on Broadway was certainly a star vehicle for Hugh Jackman, Carter fills those very large shoes quite well (I understand the 6’2” Jackman wears a size 11)! Andrea Goss as The Woman and Jasmine Batchelor as The Other Woman provide a delightful contrast to one another as The Man’s vastly different lovers while at the same moving in and out of his cabin and his life altogether seamlessly as if somehow they are the very same person…hmm, maybe they are.

The River is a reflection, albeit rife with uncertainty. Is the image looking back at you always what you expect to see? Is it muddy, rippled, or perhaps crystal clear? Such is life…and such is Butterworth’s thought-provoking work.

Having seen The River at Circle in the Square on Broadway with Hugh Jackman as “The Man,” it is virtually impossible not to compare it with TheatreWorks’ version of the same, directed by Rob Ruggiero. Now you may ask as a legitimate question, “As a reviewer, don’t you see many different versions of plays and why should I especially single out this one for comparisons?” I don’t know if I have a legitimate answer, but it may be because a play like Jez Butterworth’s The River (without giving too much away) is so ambiguous to start with and lends itself to a plethora of interpretations. That said, the only comparison that I will make between the two versions is that the Broadway one with Jackman was dark and, in this humble reviewer’s opinion, almost sinister in tone. Mr. Jackman plays a very reserved character that intimates that still waters run deep (no pun intended – or maybe it is).

Mr. Ruggiero’s excellently directed version has a lighter tone to it but is in no way less thought-provoking and/or intellectually stimulating. Billy Carter’s portrayal of The Man is more outwardly expressive and he is adept at showing his range of emotions from zenith to nadir in a matter of seconds. Billy Carter is a fisherman who appears to have always been chasing the one that got away since he was a child. He is very ritualistic, almost to the point of obsessive compulsion. I can’t help conjuring the image of Billy Carter’s character being a better-looking and more mature Holden Caulfield “catching” children before they fall over the cliff in Catcher in the Rye. In many ways, The Man is seeking salvation whether be through ritualistic and repetitive behavior or simply the need to try to capture, as Jim Croce sang, “time in a bottle.” 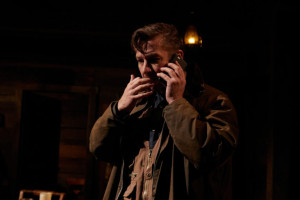 In tone, this version of The River is more in keeping with the relatively simple staging of Constellations which Mr. Ruggiero also directed. There are only two other cast members in the play, Andrea Goss as The Woman and Jasmine Batchelor as The Other Woman. All the actors are wonderful. To delve any deeper would be to give away essential plot elements which would spoil the action of the play. Moreover, I could be completely wrong in my own interpretation of the play and it would be ostentatious of me, at best, to think I have a handle on it.

Suffice it to say that TheaterWorks The River is a deeply haunting, intellectually stimulating, and at times electrifying piece of modern theatre.