Pillow Talking’s Review of THE REVISIONIST 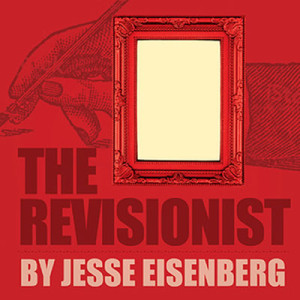 At the outset, I’ll say a great part of the allure for me in seeing Playhouse on Park’s The Revisionist was when I learned that it was penned by none other than Jesse Eisenberg, Academy-Award nominated actor, author, and playwright. I’ve seen and enjoyed number of his films and was intrigued; I also had bought my husband/co-reviewer Eisenberg’s Bream Gives Me Hiccups, a collection of humorous short stories. I’ll also say, that knowing that The Revisionist centered around themes of The Holocaust, I was prepared for anything, but expected a powerful story. My instincts were correct.

Eisenberg himself starred in the original three-character Off-Broadway production as David alongside the inimitable Vanessa Redgrave as Maria in 2013. In Playhouse on Park’s version, the leads are played by Cecelia Riddett as Maria and Carl Howell as David. The two are second cousins; Maria lives in Poland and is far-removed from her New York family but longs for connections, of which she’ll take any. This accounts for why she eagerly welcomes young, short-tempered, snarlish, and wholly apathetic David from across the globe to her home. David is a struggling author with a heavy marijuana habit and a serious case of writer’s block – he’s looking for a respite and some inspiration for revising his book (a directive per his publisher) and thinks a change of scenery will do the trick. (Methinks a change of attitude would be more like it.)

Despite the fact that Maria has opened her home, prepared him meals, and even given up her bedroom for David, he is altogether rude, impatient, and unempathetic to Maria’s gestures or to her lonely life. Maria is needy – she fervently wishes to converse and spend time with David but is rebuffed at every turn. She somehow remains warm and forgives David for his behavior. Ironically perhaps, both Maria and David are lonely – Maria, not by choice but more by circumstance; her sole companion appears to be an odd, fetishistic taxi driver named Zenon, played by Sebastian Buczyk. David’s solitude on the other hand, is self-imposed, even with family and others who surround him; his only way of functioning seems to be to shut down, be aloof and ill-mannered, and push others away.

Eventually personal details about both characters emerge and ultimately secrets are revealed – but have they set out on a path too tricky and rutted for the pair to traverse? In their short time together, have there already been too many punches thrown? Too much pain?

Skillfully and compassionately directed by Sasha Brätt, Riddett is authentic as the equally vulnerable and also resilient Maria who’s lived a lifetime of pain yet who can hold her own against the abrasive David. Howell channels Eisenberg’s often obnoxious, selfish on-screen/stage persona and the two go at it like a pair of Siamese fighting fish in a bowl, each vying for position. Buczyk is excellent as the strangely off-putting and bizarrely mannered taxi driver, who adds both humor and a bit of unease to the dynamic.

On the way out of the production, I overheard one theatregoer asking a staff member about the obscure ending. Her response to this woman was that it was deliberately left open to interpretation. In this theatregoer’s opinion, Playhouse on Park’s The Revisionist is powerful and affecting but I concur that the circle is not closed. Do the lonely remain lonely? Does the relationship between the characters of Maria and David change them in any important way? What happens next? Eisenberg successfully and impactfully leaves these questions for us to ponder long after the lights go up – but if we, as social beings, desire any kind of meaningful connections to others, we must have empathy not apathy. We must consider the importance of others’ plights and how it is that we treat them. We meet no one by accident – our paths all cross for a reason – even if we do not know what that reason is.

Above-the-title credits for anyone other than superstars are relatively rare, especially for playwrights – unless of course you’re Shakespeare or Terrence McNally. Playwright credits are usually relegated to subtitle status at best. So when Playhouse on Park recently staged The Revisionist and had Jesse Eisenberg’s name above the title on the marquee, perhaps someone less cultured than I might think that Academy Award-nominated actor Jesse Eisenberg was starring in the play rather than being the playwright. I should clarify now before my wife, co-reviewer, and editor redacts my obnoxious statement about how cultured I am and state that I had known Jesse Eisenberg was a playwright and author because I had bumbled my way into the non-fiction section of a bookstore (yes, there still a few around) and found his book Bream Gives Me Hiccups and Other Stories (truth be told, my wife bought it for me). I have not read it yet, but it is sitting in my rather long list of books I “want to read” on my Goodreads account. Don’t get me wrong. I am not criticizing Playhouse on Park for placing his name above the title. We are living in an age of branding. Besides, it did whet my appetite to see it even more.

After seeing it, now all I can say is damn, that young man is talented. He not only acts, but also writes plays, short stories, and essays. His The Revisionist is a powerful, poignant, and thought-provoking look at the chasm which exist between what has been called the “Greatest Generation” and the “Millenials.” The story revolves around David, a writer, who travels on somewhat of a writer’s retreat to a distant relative of his grandparents who lives in Poland. Maria, a holocaust survivor, is definitely old school and while she may sound like Yoda at times, she nevertheless has no reticence about voicing her opinions about family, relationships and David’s work ethic – or lack thereof. It’s not only a story about east meets west, young vs. old, apathy and anomie, juxtaposed with values, identity, and self-worth.

In the short amount of time that they are together, both David’s and Maria’s illusions (or possibly even delusions) about the meaning of life, family, and love are shattered. Without giving away any spoilers, suffice it to say that some of our beliefs and perceptions are better not to be actually realized, but remain in the ethereal and the idealized, ivory tower generator from which they emanate. In other words, our illusions are sometimes far better than reality – which often sucks.

The casting is spot-on. Carl Howell is perfect as the snarky, apathetic, spoiled and bordering on rude young man whose sole agenda is to revise his book – by making it more humorous. My wife made the point that David could easily have been played by Jesse Eisenberg himself – which he did in a prior production, a fact which my wife pointed out to me. Cecelia Riddett is wonderful as the spry, seventy-something Polish relative who is starved for family and company – two things which Carl’s character continually disses. While the culture clash often results in comedic moments. The bulk of the humor in the play must be credited to Sebastian Buczyk, a talented actor whose dialogue is completely in Polish and lends a nice layer of verisimilitude. Even though he speaks only Polish, at no point do we not understand his thoughts and intentions.

Director Sasha Bratt also must be commended for her ability to pierce the veneer of societal conventions and drill down into the core of the basic human need to be connected to others.

After watching this deeply touching work, I am definitely moving Jesse Eisenberg’s book to be next in line on my waiting list.