Pillow Talking’s Review of THE PRODUCERS 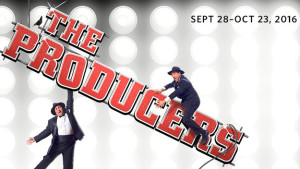 It’s not very often that something can be called pure perfection – from top to bottom, from left to right, from the inside out; but Paper Mill Playhouse’s The Producers is just that. The kind of unadulterated magic that reminds us why we relish this incredible art form known as theatre. We also are reminded why Paper Mill won the 2016 Tony Award for outstanding regional theatre, and it’s simply because they recognize and put forth all of the elements necessary for mounting a knock-down, drag-out, A-plus production.

Somehow a ticket stub from The Producers never made into my theatre memorabilia scrapbook until now. Regardless, my head has been chock-full of the pithy songs and rib-tickling plot summary during countless dinner conversations with my husband, who has seen both the 1967 film starring Zero Mostel and Gene Wilder and the 2005 film starring Nathan Lane and Matthew Broderick; and my parents, who also have seen it multiple times in film as well as on stage (with Lane and Broderick). Despite the inimitable talents who through the decades have emblazoned the beloved roles into entertainment history, because of Paper Mill, I now have the good fortune to hold my own gold standards against which I will measure any future performers and performances. 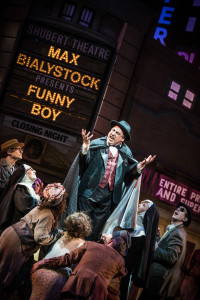 Paper Mill’s The Producers takes an incredible book by Mel Brooks and Thomas Meehan, equally as spectacular lyrics also by Brooks, outstanding direction by Don Stephenson (who re-created the original direction of Susan Stroman), amazing choreography by Bill Burns (who re-created the original also by Stroman), along with a host of multi-talented performers and presents us with a riotous yarn about doing everything you shouldn’t do when trying to create a successful stage show. It could instead be called How [NOT] to Succeed in [the Theatre] Business – with a whole lot of Hitler and Nazi jokes thrown in for good measure. Using the device of a show within a show, the abominable Springtime for Hitler is so special, so different, it’s bound to be a…triumph?

Everyone knows producer and King of Broadway Max Bialystock (Michael Kostroff) hasn’t had a hit in forever – everyone that is, but a bevy of horny old bitties who’ll do anything for him including investing money in his future shows in exchange for sexual favors (ladies with names like “Hold-me Touch-me,” “Lick-me Bite-me,” and “Kiss-me Feel-me”). When mousy new accountant Leo Bloom (David Josefsberg) shows up to audit Max’s books, he unknowingly, and soon regrettably, plants the seeds to cook the books instead – that is, to rake in two million to produce a sure-fire flop and then take off to Rio with the excess funds. But with a little arm twisting (and his childhood security blanket), Leo, who’s always wanted to be a producer, agrees to the plan and the two set about to see their dream come to fruition. 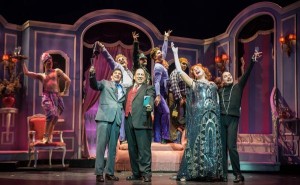 Step one: they look for the worst play ever written and happen upon a true “love letter to Hitler” by Franz Liebkind (John Treacy Egan), a man oddly enamored by pigeons and swastikas. Step two: they hire the worst director in town: flamboyant Roger De Bris (Kevin Pariseau). Step three: they raise two million smackers, Bialystock style – doing what he does best in “Along Came Bialy” in Little Old Lady Land. Step four: they hire the worst actors in New York, including knockout Ulla Inga Hansen Benson Yansen Tallen Hallen Svaden Swanson (Ashley Spencer) who comes on board as secretary-slash-receptionist (-slash-office candy) as well.

If anything can go wrong, it does, but in the real world, it goes right – one thousand percent right, both for Max and Leo, and for Paper Mill. It’s one rollicking good time from curtain up to curtain down. Kostroff and Josefsberg embody the iconic roles and are completely in sync. Kostroff shines, and is beyond staggering in “Betrayed.” Josefsberg is perfection as the bland accountant, but at the same time is never flat or boring. Spencer is utterly phenomenal as the legs-for-days Ulla; Egan as Franz Liebkind is pure delight and you can’t help but giggle and snort at his ridiculousness. Pariseau as Roger De Bris is laugh-out-loud spectacular and Mark Price, who plays his “common law assistant” Carmen Ghia is hysterical snark to the nth degree.

With one fabulous, funny, and frenetic number after another, it’s nearly impossible to catch your breath in between, and for sure, you’ll not want the show to end. The ensemble, who play countless roles from Stalin to a blind violinist to a horde of walker-wielding old ladies, are beyond compare; they include: Jacob ben Widmar, Michael Biren, Courtney Brady, Jesse Carrey-Beaver, Scott Cote, Madeleine Doherty, Hannah Flam, Brad Frenette, John Jeffords, Jeffrey Johnson II, Naomi Kakuk, Jenny Laroche, Liz McKendry, Emily Jeanne Phillips, Jessica Sheridan, and Kate Wesler.

Every piece of the Gestalt is a priceless element of the dynamic whole – shout out to Mark S. Hoebee as producing artistic director James Moore as musical director, Robin Wagner for spot-on scenic design, William Ivey Long for costume design, John Lasiter for lighting, Randy Hansen for sound, and the rest of the talented crew. Whether or not you’ve caught The Producers before, you owe it to yourself to get to Millburn for Paper Mill’s season kickoff – it really is a triumph!

In 1968 I saw an incredibly funny movie by an unknown director who was making his directorial debut. The movie was The Producers starring Zero Mostel and Gene Wilder. It, of course, was written and directed by Mel Brooks. It was so creative, inventive, and filled with inside and off-color jokes. The plot was a simple, elegant idea: raise a ton of money, use part of it to produce the worst possible show so that it closes immediately. Walk away with the excess.

We all know how subjective this business is and, like a horse race, no winner is guaranteed before crossing the finish line. So when these producers deliberately try to create the worst possible show and it turns out to be an incredible crowd pleaser, there is only one solution that producer Max Bialystock can come up with – kill all of the actors.

The scene with Gene Wilder shaking his head and repeating, “No way out, no way out, no way out,” is still permanently emblazoned in my neural pathway. I never thought the quintessential nature and themes be could be captured again – even by the person who originally created it. Although I never did see the Broadway version with Nathan Lane and Matthew Broderick, I saw the film version in which they starred and realized that I had been wrong. The 2005 remake was every bit as good as the original. Yes, Zero Mostel’s and Gene Wilder’s performances always will be iconic, but in their own way, Nathan Lane’s and Matthew Broderick’s performances achieved a new plateau – a common ground where all four actors can be independently recognized for the same roles without the inevitable compulsion to draw comparisons and speculate who was better. Both films can be equally enjoyed and stand on their own as independent versions.

It was with this background that I approached Paper Mill Playhouse’s production of The Producers. Sure, I reasoned pre-show, it may be funny, engaging and entertaining, but can it really match the spirit and soul of two past iconic productions?

After the glitzy opening number and Michael Kostroff’s introduction as the untalented and much maligned producer, Max Bialystock, I was thoroughly wrapped up in the theatrical version and was more than happy to let any comparisons with past productions go by the wayside. PMP’s production was – in a word – FABULOUS. The singing, dancing, acting, and staging were sheer perfection. There is a reason why PMP won the regional Tony Award and a show like The Producers is one of the principal ones. 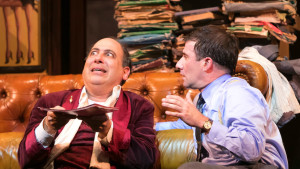 Let’s start with the acting. Michael Kostroff and David Josefsberg were wonderful as Max Bialystock and Leo Bloom, respectively. No, they were not Zero Mostel, Nathan Lane, Gene Wilder, or Mathew Broderick. But they were not caricatures either. They were real, three-dimensional, flesh-and-blood characters whose performances stood on their own. The same literally can be said for the rest of the cast. John Treacy Egan was MasterCard priceless as Franz Liebkind – his performance proving he can not only act and sing but he can dance and move – especially in a Nazi uniform! Ashley Spencer hit just the right mix of naivete, vulnerability, and sexiness as Ulla. Kevin Pariseau as the wacky director Roger De Bris and his sidekick Mark Price as Carmen Ghia, could start their own comedy team. Their comic timing was simply impeccable.

While there were too many actors in the Ensemble to name individually, they were excellent – not a weak link in the batch and they all functioned like an incredibly well-oiled machine to create a seamless musical extravaganza. Special shout-outs, however, must go to characters like Kiss-me Feel-me (Jessica Sheridan) and Lick-me Bite-me (Hannah Flam). Where else can you find characters like that, but in a Mel Brooks’ production? 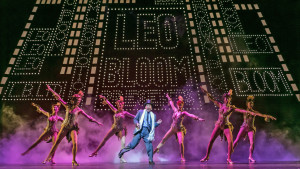 And what about the musical elements? A veritable feast for the senses. The singing and dancing were fantastic. Honestly, how can you go wrong with chorus girls popping out of file cabinets and blue-haired ladies doing age-appropriate Rockette dance numbers with walkers? My favorite number, however, was “Betrayed.” Kudos to Bill Burns who re-created the original choreography.

Don Stephenson did a masterful job re-creating the original direction.

Mel Brooks is a phenomenal talent. It’s hard to believe that he wrote the book with Thomas Meehan and did all of the music and lyrics himself. He is truly a comedic and musical genius and PMP’s production of The Producers is a testament to his talent.