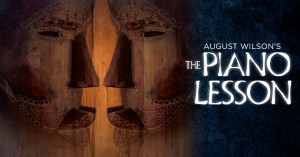 Lesson: (def.) to instruct or teach; to admonish or rebuke.

August Wilson’s Pulitzer Prize-winning The Piano Lesson is a penetrating drama of both intra- and interpersonal conflict set in 1936 Pittsburgh. It confronts one African-American family’s history in slavery and is rife with myriad lessons to be learned. Lessons which center on race, family, and spirituality. Lessons about life, loss, and resiliency. Lessons which speak to the past, present, and future. And it is the piano itself that serves in multiple ways as the instrument for such instruction and admonishment – operating at times as both the play’s protagonist and antagonist. The striking assemblage of wood and ivory is as integral to the story as any of the living, breathing characters. It also is the cherished piano which houses the literal and figurative ghosts of the family’s past; and it becomes the actual vehicle for teaching the family its lessons. 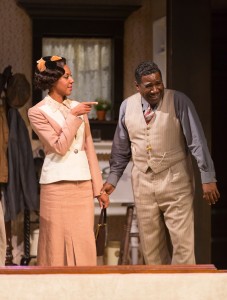 And it comes as no surprise that it would be the inimitable Hartford Stage with sure-handed director Jade King Carroll (who also directed the fabulous Having Our Say at Hartford) who bring their audience such stimulating, challenging theatre. Part of Wilson’s ten-play “Pittsburgh Cycle” (also referred to as the “Century” or “American Century” Cycle) Wilson sought to sketch the Black experience through his works. Following his death in 2005, Charles Isherwood of The New York Times called Wilson “Theatre’s Poet of Black America” who “…depicted the struggles of black Americans with uncommon lyrical richness, theatrical density and emotional heft, in plays that gave vivid voices to people on the frayed margins of life…” I could not have said it better.

Like a whirlwind, loquacious, impetuous Boy Willie (played to perfection by Clifton Duncan) blows into town, eager to move forward in his life and take on new challenges – he has plans to buy and farm the Southern land where his family once worked as slaves. As part of his financial strategy, Boy Willie is selling a truck full of watermelons with his mild-mannered, girl-crazy pal Lymon (a terrific Galen Ryan Kane). He also intends to sell the family legacy – the piano which for him is a symbol of a past better forgotten. 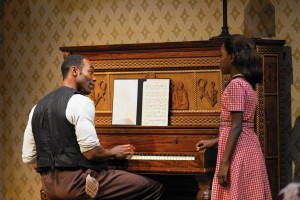 Boy Willie goes to the home of his peacemaking uncle Doaker (splendidly played by Roscoe Orman, one of the central characters, Gordon, on Sesame Street from 1974-2014), a hard-working, principled, keeper of the family history, who resides with Boy Willie’s caustic, sister Berniece (an exceptional performance by Christina Acosta Robinson). Berniece is not a happy woman, as one who has been plagued by loss – of both her parents as well as her husband. She is fiercely protective not only of her daughter Maretha (a fine young talent, Elise Taylor) but of the piano, which to her symbolizes everything that she holds dear. When she learns of Boy Willie’s plans to sell it, there is friction and the two argue incessantly. To add fuel to the fire, ghosts eerily enter, disrupting the household as well as each of its residents.

The Piano Lesson brings to light the importance of accepting and embracing both the past and the future. From psychology we learn that it is prior events which aid in shaping who we are to become; as well as anticipated events which help to motivate us; yet there are times when the may two conflict. For Berniece, she holds tight to the locked up memories of family tragedy. But this keeps her rooted and stuck, never allowing her to grow and progress. In contrast, Boy Willie zealously wishes to purge the past in favor of the future, in some sense denying the family history.

Additional roles are played by a fabulously funny and splendid Cleavant Derricks as Wining Boy, the broke former recording star and fast-talking uncle to Boy Willie and Berniece and brother to Doaker; a dignified Daniel Morgan Shelley as Christian preacher Avery, Berniece’s persistent and patient suitor; and the comic relief of Toccarra Cash as Grace, the barfly who becomes the object of both Boy Willie’s and Lymon’s affections.

Of exceptional note must be the set which so perfectly represents time and place with consummate attention to detail. Set askew (where the best seats where we sat, actually were off to the side rather than center), with elements of the house’s foundation observable around the edges, it is as I we can see a bit of everyone’s under layers including the Depression-era Pittsburgh home. Huge kudos to Alexis Distler for an immaculate design.

The rich, ornate detail of the carvings on the piano are matched by the richness of Wilson’s story and by his interpretation of Black American history. As we’ve come to expect, the brilliant Darko Tresnjak, Hartford Stage’s always ambitious artistic director, has once again presented a masterpiece.

The playwright, August Wilson, and his body of work are back in vogue. Not that they were ever really out of the mind of artistic directors in theatres around the country. But certainly, Denzel Washington’s forthcoming release, Fences, based on August Wilson’s play will no doubt create a resurgence of interest to a new generation of theatre and film-goers. The Oscar winning Mr. Washington, who directs and stars in the film, is bound for more Hollywood gold.

While Fences may be August Wilson’s best known play, The Piano Lesson is not far behind. The play received the 1990 Pulitzer Prize for Drama. Set in 1936, the play revolves around an African-American family and its only legacy – an heirloom piano with the hand carved scenes of the family’s history dating back to when their ancestors were slaves. Boy Willie and Bernice Charles are an estranged brother and sister. Bernice, a widow, and her daughter have been living with her uncle Doaker Charles in Pittsburgh. Boy Willie and his boyhood friend Lymon unexpectedly show up with a truck full of watermelons. Boy Willie’s goal is to sell the watermelons and his half of the family piano and buy farm land in the South. His sister, Bernice, however, refuses to sell her half even though she no longer plays it. For her, it’s their family’s history and legacy. It belonged to the white family that owned her slave ancestors and her father died in absconding with the piano.

What follows is an intense examination of family relationships, values, hopes, dreams and what it means to have an ancestral legacy both from a financial and social standpoint.

Hartford Stage’s production of The Piano Lesson is a brilliant pedagogical and historical work that, much like H.G. Wells’ The Time Machine, transports the audience back in time to the aftermath of the Great Depression, segregation, and apartheid. 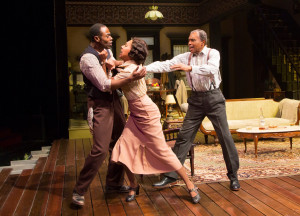 The acting is phenomenal. There’s not a weak link anywhere in this multi-talented cast. Clifton Duncan was spot-on as the ambitious, arrogant, yet likeable borderline criminal Boy Willie. (Samuel L. Jackson played the role when it opened back in 1987). He was the perfect foil for Christina Acosta Robinson’s portrayal of the straight-laced, appearance-conscious Berniece. Roscoe Orman as Doaker had such an easy way about him playing his part as the sometimes-wise, sometimes-foolish Doaker, that you never once doubted his credibility. A nice surprise was Galen Ryan Kane’s young and vibrant performance as Lymon, whose charisma seemed to be the only thing that could melt some of Berniece’s hard core frigidness. (He also got a rousing round of applause from the audience when the poor farmhand transformed into a city slicker dressed to the nines after he sold his watermelons.)  Rounding out this wonderful cast was Elise Taylor (Maretha), Daniel Morgan Shelley (Avery), Toccarra Cash (Grace), and Cleavant Derricks (Wining Boy) who could play a mean piano and sing the blues.

My one criticism (and it’s of the structure of the play and not the production) is that the resolution of the piano relies on an all too easy deus ex machina in the form of a somewhat violent poltergeist. More than that I cannot say without spoiling the ending.

Nevertheless, the play is a poignant and significant piece of theatre which must be experienced. Mr. Wilson was quoted once as saying, “Blacks have traditionally had to operate in a situation where whites have set themselves up as the custodians of the black experience.” This is the quintessence of The Piano Lesson.