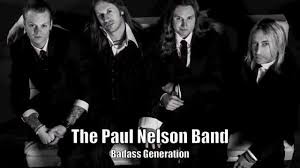 You’re taking a risk when you put “Badass” in the title of your CD. In a world of hyped-up, fabricated bands and overstated promises of “kick-ass music,” only to be let down, I am happy to report this is clearly not the case here. With Paul Nelson’s new CD, Badass Generation, you definitely get what’s advertised on the tin. Badassery, guitar-riffing, whiskey-drinking, roadhouse bar-fighting, rock-and-roll. Personally, for a guy like me who has been getting more and more jaded as time goes by, wondering what the hell happened to music and where have the rock bands gone, this CD is a breath of fresh air.

The songs feel slightly southern rock-influenced with a little swampy swagger mixed with some catchy NYC polish in the backing vocals. They kind of remind me of a really good 2016 spin on the band Damn Yankees. They have great hooks and melody with a boot-in-the-ass punch that is sorely missed in 98% of the music that has come out since Simon Cowell became a staple on TV.

To understand the alchemy here, let’s break it down to its individual parts. Paul Nelson is one badass guitar player, extremely polished and tasty in his solos. Never overplaying but bringing just the right edge and attitude to every part he plays and as I sit here listening, his tone is so good it is actually pissing me off! As a guitar player I’m jealous! More important than his playing is his ability to write a good song. It’s rare to get a smoking guitar player who can write like this – it’s usually one or the other.

Singer Morten Fredheim has got the perfect voice for this kind of music. When he is pushing it like he does on the open track “Down Home Boogie,” he has just the right amount of rasp to give it believability and character without subconsciously making you want to clear your throat. When he does a softer track with a more vulnerable approach like “Please Come Home,” it cleans up perfectly. Love his voice. Christopher Alexander does a great job anchoring the band with his solid, tasty bass playing and Chris Reddan, who I have become familiar with from his work with Lance Lopez, is again in top form. He is a great drummer.

So we have broken it down, let’s put them back into solid form – glued together as a unit, these guys work magic. If you want to get your rock rolled, buy the CD – now!