Pillow Talking’s Review of THE MALE INTELLECT: AN OXYMORON by Robert Dubac

Someday Productions LLC and Pillow Talking are pleased to present the following review of THE MALE INTELLECT: AN OXYMORON by Robert Dubac 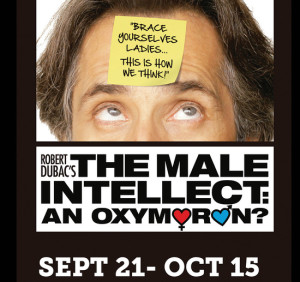 If I said it once, I’ve said it a thousand times, to successfully pull off a one-person show today you need a witches brew with the following ingredients: talent, creativity, originality, and the elusive “X” factor as Simon Cowell used to say in the early American Idol days. If one of those ingredients is missing – you better stock up on anti-heine itch cream, because you’re going to need it. 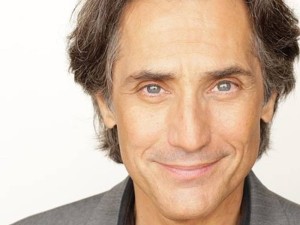 Fortunately, Seven Angels Theatre lucked out with Robert Dubac’s one-person show – The Male Intellect: An Oxymoron? The show has all of the above ingredients and more thanks to its creator, writer and star, Robert Dubac. No anti-heine itch treatment needed; in fact, the ninety-minute show flies by leaving the audience craving for more. It is a hilarious, side-splitting (yet strangely piercing, intense and insightful) look into the mind of most (if not all) men. I dare say it is virtually impossible for male or female audience members not to relate to one or more aspects of the show. And that is because all true comedy is rooted in the notion and tradition of finding things we can identify with and end up laughing at ourselves.

The show opens with “Bobby” telling us about how his fiancée has broken up with him supposedly because she “needed some space” and that she will call him in two weeks. The two weeks are just about up and Bobby is counting down the minutes to the promised phone call. To while away the time, he wrestles (literally and figuratively) with the right and left halves of his brain about why she “really” broke up with him and what is it that women really want in a relationship – which is itself another oxymoron and the subject of a whole different show. Back to The Male Intellect. 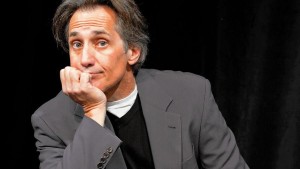 The struggle between the two halves of his brain are cleverly portrayed by splitting the stage into right and left temporal lobes. Stage left, cluttered with memorabilia, file cabinets with bottles of booze, clothes strewn around in haphazard array, represents Bobby’s left side of the brain – the part that deals in reality, logic and cynicism. Meanwhile, stage right is barren except for a chalkboard, and represents the creative, emotional side (do I dare suggest feminine?) of Bobby’s brain. Bobby paces back and forth  between the two sides of the stage at critical points, as he metaphorically wrestles with both his masculine and feminine alter-egos.

Most lame one-person shows not only suffer from heine-itch and obsessive clock watching (that’s why I still wear a wrist watch to the theatre so no alarms will go off if I were to try and check the minutes to intermission on my phone). Not true with The Male Intellect. As I already said, the show’s pacing is spot-on, making the show fly by. I almost wish there was an intermission to stall the denouement. Of course, although Bobby can more than carry the show on his shoulders alone, he does have the help of his five cohorts/mentors/avatars that are separately credited in the program: The Colonel; Jean-Michel; Fast Eddie; Old Mr. Linger, and Ronnie Cabrezzi. With a deep breath, or the twist of a head, Bobby seamlessly turns into these characters at will to advise him about what women want most. Indeed, like the five people you meet in heaven in Mitch Albom’s book of the same name, while the characters represent stereotypical abstractions and generalizations, they do provide kernels of wisdom with which we can all relate. (And let me say that as a kid from Yonkers, I knew all five flesh-and-blood characters in my past.)

Witty, hilarious, at times daring and on the cusp of inappropriate (in a good way) The Male Intellect: An Oxymoron is a gem of a show which both men and women can and will enjoy. Even young people who have just started their social journeys into dating and relationships will find useful tidbits in the eternal search for the yellow brick road, true love, and happily ever afters.

The male is a domestic animal which, if treated with firmness and kindness, can be trained to do most things.  — Jilly Cooper, English author

Let me preface this review by saying that I don’t agree with Jilly Cooper – well, not entirely. I’m no man-basher. I adore my husband. But. There. Might. Be. Just. A. Few. Things. He. Could. Tweak… 😉 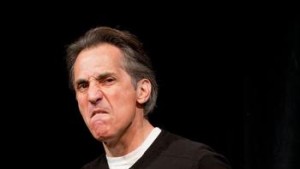 What’s my point, you ask? Well, it happens to be in the wake of my most recent jaunt to Waterbury’s Seven Angels Theatre and in the context of their present offering, Robert Dubac’s hysterically funny solo show, The Male Intellect: An Oxymoron.

First of all, there’s an art to poking fun at the sexes. There are ways it works and ways it doesn’t – it is through self-deprecation that most of us find it acceptable, and that is because it’s really only oneself who’s given any kind of permission to engage in the ridicule. When the action is taken by others, well, we’d call the disparager a bully, and no one likes a bully.

There’s also an art to comedy – to creatively express oneself in such a way that it provides humorous and amusing entertainment for others. Comedy is also great for the body, mind, and soul – it bathes you in laughter and we’ve all heard how that’s every doctor’s prescription for what ails you – laughter is the best medicine. 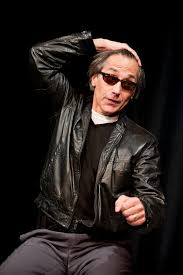 So take the two and combine them: you’ll have self-deprecating comedy, a smart and savvy way to get your point across by making yourself the butt of your own jokes. Defuse tension, disarm your audience, then go in for the kill. Ladle it with the gulf known as the male/female communication gap and mix in more than a heaping scoop of other Mars and Venus-isms and what have you got? An uproarious night of wit and wisdom – extracted from the gray matter of author/actor Dubac’s own brain.

Merriam-Webster defines oxymoron as: a combination of contradictory or incongruous words (such as cruel kindness). Dubac takes this to extremes – men and women; right brain and left brain; past and present…you get the idea. But at the same time, life is about finding our way to the middle ground, coexisting, understanding, and hopefully, loving.

Dubac’s “Bobby” is central to all of this. He’s a guy who’s been dumped and he’s trying like hell to figure out why. Where did he go wrong? Will he get her back? Should he call? Will she call? Jumping back and forth across the proverbial line drawn in the sand (or across the stage as the case may be) Bobby tries to navigate the rocky terrain of his own “left brain” and the more female “right brain” sensibilities. All that while swigging from a beer bottle and trying not to trip over the clutter on the floor, also symbolic of the disorder in his noggin’s left hemisphere.

Bobby isn’t alone, however. He’s got five other head cases of testosterone-fueled incompetence to aid and abet – “The Colonel,” a vet who preaches honesty; “Jean-Michel,” a smooth-talking Frenchman who campaigns for communication; “Fast Eddie,” a leather-wearing bad boy who advocates for passion; “Old Mr. Linger,” an old-old man (123 to be exact) who promotes humor in relationships; and “Ronnie Cabrezzi,” who claims security must be at the core of all relationships. Each of the men offer up their own brand of counsel, but ultimately it’s up to Bobby to figure himself out.

All six guys are a mish-mash of stereotypes. But as a psychology professor, I discuss the importance of stereotypes – which mostly get a bad rap. And that is because we consider them as purely inflexible and oversimplified, hard-and-fast images of people or things, which don’t take into consideration individual differences. While stereotypes may not always accurately represent reality, they serve a purpose: we use them for efficiency and to make sense of the world. They help us navigate. That’s what Bobby does. But he and his audience ultimately may find there’s more to everyone than might meet the eye. And you’ll be in stitches for the entire 90 minutes as Bobby goes to places he hasn’t gone before.

The key to great solo shows is to engage one’s audience. Dubac charms us each time he hits home with some nugget of truth. He punctuates it with his veritable buffet of wild personas. A little bit of stand-up mixed with a fictional man’s narrative (it’s NOT autobiographical, he says). The only thing that might top things off is if he passed a few cases of Corona around the theatre…but I’ll forgive him that and instead have a few with my husband this weekend while we talk about astronomy (get it, Mars, Venus?).