Someday Productions LLC and Pillow Talking are pleased to present the following review of THE LONELIEST NUMBER at The Flamboyán Theater at the Clemente Soto Vélez Center, 107 Suffolk Street, in Manhattan 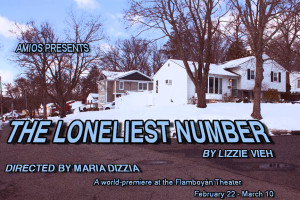 I am compelled to begin this review by noting that exploration of the themes in Lizzie Vieh’s poignant new work, The Loneliest Number, are not new to me and in some ways are quite near and dear. It is not because I have ever been interested in nor engaged in swinging, but instead it is because my husband/co-reviewer, Wayne, and I have penned a work of our own which touches on many of the same issues. Not intended to be a plug, shameless or otherwise, our book Going All In was published recently to great acclaim, and we also have a stage play and screenplay versions of the same. It seems that the crux of both stories is one that appeals to and intrigues a great many people – can couples who swing or engage in open, extramarital sex build stronger relationships? Can it work for all involved in a way that no one gets hurt? In a nutshell, one might ask, what happens when more-or-less intact couples indulge in mutually agreed-upon, consensual sex outside of their own unions? Will it “spice things up” as intended or will it bring suppressed – or even repressed – problems to the forefront and ultimately cause marital ruin? Or even something worse?

So it was with great enthusiasm that we settled into our seats at the intimate Flamboyán Theater on Manhattan’s Lower East Side. On a nicely appointed and economical set (kudos to Set Designer Frank J. Oliva) which quadrupled as two different apartments, a bar, and a hospital waiting area, we meet John and Wendy, a childless couple who take turns choosing a “third” to bring to their bedroom each month. Despite the third serving as support to the symbolic three-legged stool, he or she is always intended to be the outlier…the extra…the one to the two-plus-one. At this point, John and Wendy are already many months into their exploits and have experienced no serious hitches. Wendy makes her next selection – a brooding, socially inept co-worker who is known to have a serious crush on her; and the following month John makes his – Arianne, a touchy-feely bartender and part-time dry-cleaning clerk who is laden with tattoos and is quite comfortable in occupying others’ personal space. Not a newbie to the swinging game, Arianne’s attentions don’t just lie with John, but also with Wendy – potential makings for a complex “throuple” relationship, so to speak.

If that’s all not enough to stir the proverbial hornet’s nest, the after-effects of John’s prior cancer treatment, which include erectile dysfunction and Wendy’s inability to become pregnant, create even more dissonance within the core dyad, which spills over into the monthly escapades and onto the psyches of the other players. Soon the rules of the perilous game become blurred – physical turns to emotional – and while no one was supposed to get hurt (after all, they’re consenting adults), some things are impossible to prevent once that line has been crossed. 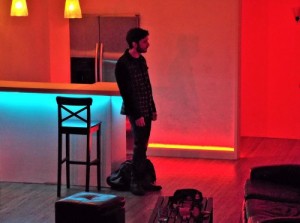 At the production we attended, John was played by Zac Jaffee (understudy to the lead, Maurice Jones). Jaffee’s performance is exceptional, authentic, and heartrending. His chemistry with Leigh Williams as Wendy is palpable and you become drawn into the mounting challenges of their fractured marriage. Williams delivers a beautifully nuanced portrayal – vulnerable yet strong-willed, she exposes the fine line that exists between being in love and falling out of it. Justin Yorio in the role of Kevin delivers with effortless aplomb; as a man grappling with the ghosts of childhood abandonment, he presents with almost spectrum-like tendencies and an eerily disturbing social unease. To round out the incredible cast is Cassandra Paras as the passionate, carefree spirit, Arianne, who at times serves as the only voice of reason for the other three.

With the spot-on delivery of Vieh’s sharp, witty dialogue and expert direction by Maria Dizzia, The Loneliest Number is a fast-paced psychological journey through five months of human foible and frailty which keeps you on the edge of your seat. The characters are so well-crafted and engaging, it will make you wonder what may go on behind your own neighbors’ doors (we don’t! Going All In is loosely based on real-life events!). There isn’t a weak link in the entirety of the production, including perfect accents of sound design by Nick Abeel, lighting design by Ali Hall, and costume design by Jocelyn Pierce.

John and Wendy have enacted their plan with seemingly good intentions. Their desire is that no one becomes entangled in the strings of emotional intimacy. In keeping each of their thirds for only a limited “monthly” run, John and Wendy can continue to remain monogamous-ish because nothing is supposed too deep – the third is out in good time. Nevertheless, this inherently faulty and ill-conceived blueprint for disaster is draped over an already crumbling foundation; a marriage which is at present, too weak to withstand such stressors. It is impossible for the human animal not to feel any of a host of emotions in such a situation – jealousy, passion, fury… As we all know, relationships are tough enough – where they are at times glorious, at others they are stormy, unpredictable, and downright messy.

Vieh’s story asks us if it is possible for one to satisfy another – and then another – and still satisfy ourselves?  As the play progresses, you won’t be sure who to root for – which dyad, triad, marriage, or hook-up; and even your own loyalties to the characters might shift. Vieh keeps you guessing and ultimately you may love or hate the play’s outcome. But in truth, it’s all about the complexities of human existence and the way things rarely go as planned.

Life is a rollercoaster, but if you are fortunate to see a production of The Loneliest Number, I guarantee you’ll be thrilled to take this ride.

Lizzie Vieh’s new play, The Loneliest Number, performing at the Flamboyán Theater at the Clemente Soto Velez Cultural Center is a searing, riveting look at our feeble attempts as flawed humans grappling with some of the most powerful of the Seven Deadly Sins which tempt and threaten to consume us on a daily basis: lust, envy, wrath, and pride. The play also provides a thought-provoking and incisive analysis of love, fidelity and intimacy. In so doing, it wrestles with the age-old question as to whether there can ever be a casual relationship between two people when you throw elements of sex and emotional strings into the mix.

The principal themes of the play are certainly not new. Iconic films like Bob and Carol and Ted and Alice and When Harry Met Sally (and less iconic films like Friends with Benefits and the wonderful Sessions) have explored the intricacies and pitfalls of casual sex, falling both into and out of love, and commitment phobia. However, the play’s approach and expression of those themes are rather unique. Indeed, the story is elegant in its simplicity: a couple tries to spice up and save their failing relationship by exploring and experimenting with polyamory. Every month one partner decides to ask a new person to become a “third” in the relationship. As part of the couple’s pitch to a prospective “third” they ask, Can a two-legged stool stand alone? No, of course it can’t. It needs a third leg. The logic appears flawless.

But life tends to be messy. As Woody Allen said, “the heart wants what the heart wants,” which is oft times quite divergent with logic and rationality. As a professor of interpersonal communications and group dynamics, I point out that two people does not a group make. Two people are what is known as a dyad. Each one has the ability to stalemate the other and halt any forward decision making. Add a third individual and the dyad becomes a group, subject to a whole set of “group” dynamics. The number three historically is a significant number (other than its obvious religious context). The Pythagoreans taught that the number three was the first “true” number and it is the first number that forms geometrical figure – i.e., a triangle. Add a third individual to a dyad and a state of entropy occurs and it is really only a matter of time before somebody becomes a third wheel subject to removal by the other two.

The play beautifully leverages the power of the number three and demonstrates the laws of gravity as the characters fight to keep their heads (both literally and figuratively) above water. Without giving too much away, we see the full effect of the axiom “familiarity breeds contempt” juxtaposed against the lifespan of one particular couple. 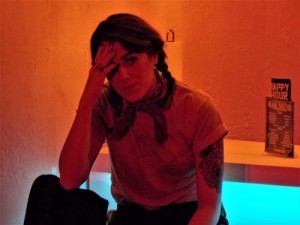 The acting is as good as it gets with each actor giving a stunning portrayal straight from the heart. The ensemble cast of four was perfectly balanced and as solid as a geometrically perfect square. The ensemble cast takes us on four distinct journeys as each character exhibits their individual wants, desires, hopes, and dreams and it is the intersection of their diverse interests where the truth and meaning of the play lie. Kudos to Leigh Williams (Wendy), Justin Yorio (Kevin), Cassandra Paras (Arianne), and Zac Jaffee (John). Mr. Jaffee understudied for Maurice Jones at the performance we attended. The play was masterfully directed by Maria Dizzia who skillfully peeled back the layers of civility and appearances to give us a glimpse of what happens behind closed doors.

The Loneliest Number will not be the “loneliest” for long once word gets out about this brilliant piece of theatre.