I’m proud to say that I am a person who tries not to be judgmental and I hardly enjoy laughing at another’s expense; but there’s quite a difference (and a genuine exception) when you’re laughing with others who are flagrantly, unabashedly poking fun at themselves. In fact, few successful comics haven’t mastered the art of self-deprecation. Such is the case in David Nehls and Betsy Kelso’s 2006 Off-Broadway delight, The Great American Trailer Park Musical, an irreverent, laugh-‘til-your-sides-ache-and-spray-cheese-comes-out-of-your-nose spoof on everything from roadkill and sniffing markers to pole dancing strippers and the electric chair (really!). With direction by theatre gem Meghan Lynn Allen, The Opera House Players at Broad Brook Opera House provide an evening of full-blown, white trash, dizzying giddiness with spot-on acting, singing, and dancing, which even may prompt some theatregoers to yearn for the return of big hair and mullets. (But sorry, I’ll personally have to pass on that last one!)

With a to-die-for set cheekily representing the mobile home community dubbed “Armadillo Acres” nestled in the heart of Starke, Florida (Starke is evidently nearby to towns with some pretty peculiar names), it is all you’d expect a trailer park to be. And if you’ve never visited one, take a peek on UrbanDictionary.com and search “trailer park” if you want some clarification beforehand. You’ll find every common stereotype and then some (including a requisite flock of pink plastic flamingos) in Nehls and Kelso’s tooth-achy confection – and I mean that in the best possible way. And as the sassy, bleached-blonde leading ladies who also are the narrators to everyone’s personal life tell us – Betty, Lin, and Pickles – not all trailer park denizens have missing teeth. What they do have, however, is quite possibly something different than other folks – because everyone at Armadillo (except for a few bedraggled newcomers) has each other’s back. There’s loyalty, camaraderie, and plenty of armchair, or should I say cheap lawn chair psychology to be dispensed.

You just can’t make this stuff up – well, maybe you and I can’t, but Nehls and Kelso can and they did – on a night I imagine they may have been sitting in sleeveless flannel shirts in a blow-up pool in the back of a pickup while eating jalapeno Pringles and swigging Pabst Blue Ribbon or anything out of a red Solo cup. 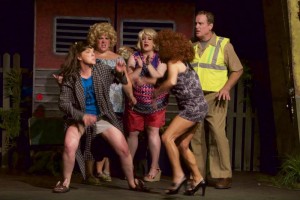 The story centers on the lives of just-shy-of-twenty-years-married agoraphobe Jeannie Garstecki (Christa Douyard) and toll booth operator Norbert Garstecki (Jeff Clayton). Jeannie hasn’t set foot out of the tiny trailer in nearly as long after the abduction of the couple’s only child (she was too upset over her bad perm to notice someone making off with him). When Norbert’s patience finally has run out, he accidentally finds himself in the arms of Armadillo new arrival Pippi (Jami Wilson), the big-haired, scantily-clad stripper who’s on the lam from her bad-boy boyfriend, Duke (Tomm Knightlee) who has a penchant for shopping at Costco and contributing to the Southern glut of roadkill. Interwoven among the present-day, flashback, and dream-sequence actions is fourth-wall-be-damned narration by Betty (Christine St. Amant Green), widow and head of the triumvirate; Lin (short for Linoleum as she was birthed on her kitchen floor) played by Kait Rankins, who’s fond of regaling everyone with the details of her conjugal visits with her death-row hubby; and dim-bulb Pickles (Lyndsay Hart), the seventeen-year-old whose moniker was derived from her chronic pregnant, er, I mean, hysterically pregnant state. The ladies also play various other roles for “illustrative purposes” – everything from “Stand by Your Flan” mall worker and purveyor of pudding, Tina, to a group of male strip-club patrons and a cheesy talk show hostess.

Douyard is the perfect blend of innocence and gusto as Jeannie, who’s determined to get out of the house in time for her anniversary celebration at the Ice Capades. And while she’s weak-kneed about the out-of-doors, she’s not when it comes to handling her man’s adultery. Clayton is a wonderfully sad sack Norbert, for whom you feel both sorry about his wife’s constricting predicament and at the same time mildly angry for his errant actions. But I must say he rocks a Whitesnake/Mötley Crüe-esque mullet like nobody’s business. Together their chemistry is just so beautifully – redneck.

Wilson’s Pippi is plucky, brazen, and completely shameless. Teetering around on her stripper heels in body-hugging and altogether tacky garb, she’s not exactly someone you find yourself rooting for but you’ll commend her for doing what she must to keep on livin’ and you’ll love her set of pipes. Knightlee’s Duke is a caricature of a character, but honestly it works – and works well. There are plenty of guffaws in his wacky antics – most notably during his rendition of “Road Kill” surrounded by the dazzling triad of bleached-blonde babes.

And for those fab sun and Clorox devotees – St. Amant Greene rules not only Armadillo Acres as its owner, but she radiantly commands the stage every time she’s on it. Rankins’s Lin is cursing, cutting, and often caustic but always hysterical. Hart is perfection as the dense, empty-headed Pickles, who’s got more going on under wraps than anyone knows, even herself. The three also have such dynamic chemistry, you believe they’ve been BFFs forever.

Allen, no stranger to Broad Brooks’ stage, did an incredible job giving life and depth to this crazy story and crazier bunch. Timothy Chávez provided terrific musical direction for the upstage-behind-the-trailer-park orchestra (Chávez on piano, Matthew Patton on guitar, AJ Del Negro on bass, and Ray Dandurand on drums). Karen Anne MacMahon did a super job with some wildly fun and inventive choreography. Moonyean Field pulled off some equally amusing and quirky costumes; complemented by marvelous wig styling by Adam Consolmagno and Kat Reed. As I mentioned earlier, the set was utterly fabulous – credits to Greg Trochill for design and his entire team of artists and construction crew. Kudos to Diane St. Amand for lighting, Bill Baronas for sound, Julianne Thouin for assistant direction and production.

So before the hitches are attached and the trailers are headed out, you owe it to yourself to head to Broad Brook for a spirited rendezvous – just check your political correctness at the door as you brace yourself for tons of foul language, taboo subjects, and all things hickish and hokey. Above all, be prepared for nothing but a raucous good time!

After seeing an entire season at the Broad Brook Opera House with The Opera House Players, two certainties have arisen (other than death and taxes). They are the following: you expect top quality entertainment and a selection of plays that are “gems in the rough” – i.e., that do not often see as much daylight as other community theatre circuit offerings. Sure, Broad Brook does its share of standard fare like Man of La Mancha and Avenue Q. But also it’s willing to do plays like She Loves Me and the very difficult to stage Into the Woods.

The Great American Trailer Park Musical falls within the “gem” category for sure. When done properly, it is a hysterical romp through the fictitious Armadillo Acres trailer park in Florida. The book is by Betsy Kelso and music and Lyrics by David Nehls. It was originally presented in the 2004 New York Musical Theater Festival and opened Off-Broadway in 2005.

The Opera House Players’ production brilliantly directed by Meghan Lynn Allen (whose direction we loved in She Loves Me), with music direction by Timothy Chávez, and choreography by Karen Anne McMahon is knee-slapping, side-splittingly funny. Ms. Allen has assembled a multi-talented cast which fit their characters like the one-size-fits-all gloves on special in Wal-Mart. In fact, the entire audience had red necks – not because of any social categorization or slur, but because everybody was laughing so hard throughout the play they had to have stiff necks from bobbing their heads so much. 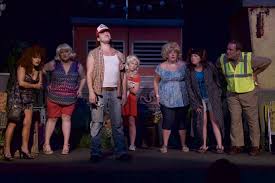 The direction and acting are great at setting up the typical stereotypes associated with trailer parks and rednecks and then shattering them with laughs and plot twists. Betty, Pickles and Lin, the three narrators of the story (functioning somewhat like the trio in Little Shop of Horrors), played respectively by Christine St. Amant Greene, Lyndsay Hart, and Kait Rankins, are simply wonderful. The trio prove that they not only can sing and dance in sync, but acting-wise, they bring their very own special nuances and certain idiosyncratic character traits that give their performances a je ne sais quoi all their own. Indeed, the same can be said for the other members of the cast. Jeff Clayton as the hapless toll booth collector caught between a rock (his agoraphobic wife) and a hard place (his stripper girlfriend), projects a convincing vulnerability and sentimentality to the role. Christa Douyard as Jeannie the agoraphobic wife who hasn’t been out of the trailer in twenty years, combines the sometimes oxymoronic qualities of humor and pathos. Jami Wilson as Pippi, the down-on-her-luck stripper  shows her broad range of acting, singing and dancing skills that she has in her repertoire. And last, but certainly not least, Tom Knightlee as Duke is hilarious as Pippi’s clumsy but devilishly charismatic redneck boyfriend. Although the ending is somewhat predictable, it is completely satisfying.

The characters, like the play itself, are very layered. Yes, it plays on certain stereotypes for laughs, but in doing so, the actors are able to transcend mere stereotypes or characterizations so that they ultimately come off as real flesh and blood people who we can laugh with rather than laugh at. It is to Ms. Allen’s credit as an excellent director that this is made possible.

While the music, singing and choreography are engaging throughout, two numbers that were exceptionally creative in terms of costumes and choreography was “Storm’s A-Brewin’” and “Road Kill.” With respect to the latter number, it was amazing how a road trip can be conjured up using flashlights, a chair on wheels, and animal hats.

Special props must be given to costumer Moonyean Field and wig stylists Adam Consolmagno and Kat Reed. And kudos to a great set by scenic artists Cheryl Connell and Audrey Corman; the set/prop construction crew which are far too numerous to list.

Broad Brook Opera House has done it again. This is a must see show!