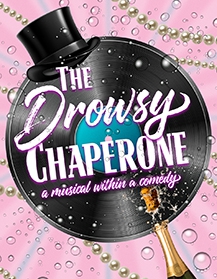 For More Info or to Purchase Tickets

Confucius said, “Choose a job you love, and you will never have to work a day in your life.” While it’s taken me some time, but I have learned the importance of those wise words. I’ve worn many hats through the years and at this point in my life, I have become more and more committed to engaging in things that I enjoy – and that means whatever it is I’m doing, it hardly ever feels like work. One of the hats I wear is obviously that of theatre reviewer and I am very fortunate to have the opportunity to see incredible works on a regular basis. Even so, there are times when a particular production so far exceeds my expectations that I am blown away.

And that’s precisely what happened when I saw Goodspeed Musicals’ The Drowsy Chaperone. Unlike my husband/co-reviewer, I love the element of surprise that comes from not knowing much about a play beforehand – that way I’m like a true voyeur as the story unfolds before me. Wide-eyed, I take in every element, every nuance – and with this production, I was instantly awestruck. For the entirety of the production as well as long after the final curtain, I also had a permanent smile plastered across my face – my zygomatic major and orbicularis oculi (among other facial muscles) definitely got incredible workouts!

The Drowsy Chaperone is one of the best musical theatre experiences one can hope to have – it is rousing, refreshing, and altogether riotous and will have you rolling in the aisles until your sides ache. With music & lyrics by Lisa Lambert and Greg Morrison, and book by Bob Martin and Don McKellar, The Drowsy Chaperone is actually a musical within a play that just smacks you in the face from the word go. Narrated by a nebbishy but altogether charming and charismatic theatre-loving man known only as “Man in Chair,” he sits alone in his lackluster apartment, the oddly perfect backdrop for him to then regale us (he breaks the fourth wall with every spoken word) about his love for a little-known 1928 musical called The Drowsy Chaperone. 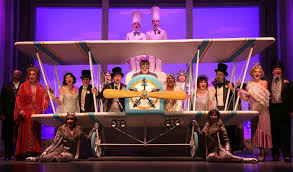 Throughout the production we learn about the Man’s quirky life while we develop an understanding of his passion for the fictional musical – and as we do, ourselves also appreciating the over-the-top and ridiculous grandeur of The Drowsy Chaperone, we grow to love him even more. (I commented to my husband that I wanted the Man to come to our house and hang out with us!) Essentially, we are invited to see what he sees as he plays the album of The Drowsy Chaperone – it comes to life, literally all around him. The characters, costumes, and story line of the musical embody all the glitz, glam, and sometimes schmaltzy silliness of a Broadway musical, utilizing every plot device imaginable. And the more absurd it gets, the harder we guffaw.

Directed by the brilliant Hunter Foster whom Pillow Talking has seen numerous times, most notably at the helm of several productions of Million Dollar Quartet, with exceptional choreography by Chris Bailey, and spot-on music direction by Michael O’Flaherty, Goodspeed’s The Drowsy Chaperone couldn’t have had a more perfect Man in Chair than John Scherer. He never missed a beat, drawing us in and welcoming us into his strange and wonderful world. The Man generously introduces us to chirpy Broadway starlet Janet Van de Graaff who is about to marry cheesy oil tycoon Robert Martin, much to the dismay of frustrated Broadway producer, Feldzieg. The betrothed duo are played by Stephanie Rothenberg and Clyde Alves, respectively, and both performances are exceptional and hysterical. Robert’s best man, George, played by Tim Falter is spectacular and boy can he hoof it on the stage with his bestie. Hostess with the mostest Mrs. Tottendale played by Ruth Gottschall and her “Underling” Jay Aubrey Jones add loads to the fun. Feldzieg is trailed by Kitty, a dim wannabe actress who wants nothing more than to take Janet’s place but who couldn’t hold a candle to her if she tried – James Judy is terrific as Feldzieg and Ruth Pferdehirt nails the stereotypical histrionic ditz.

The Drowsy Chaperone will do anything but make you drowsy – it’s an uplifting, energetic, and exuberant piece of musical theatre that makes you want to see it again and again just to be sure you didn’t miss a single thing!

The title of the Goodspeed’s play The Drowsy Chaperone is somewhat of an oxymoron. There is nothing drowsy about it; nor does the play really have a chaperone. It is really a tour de force; the kind of musical comedy that gets you laughing in a darkened theatre before the lights go up, keeps you laughing through intermission and Act 2, and way beyond the curtain calls.

Although the play is touted on the program as “a musical within a comedy,” it is really a musical comedy within the mind of the play’s main character and narrator who is simply known as the “Man in Chair.” We are invited into the rather dull and bland narrator’s apartment who is anxious to tell us about one of his favorite Broadway plays that takes place during the “Roaring Twenties,” called The Drowsy Chaperone. He actually has never seen the play, but listens to the music and lyrics on his mother’s old vinyl records.

Einstein said, “imagination is more important than knowledge.” We can see how on the mark Einstein was when a glorious musical comedy complete with actors, costumes and props comes to life within the narrator’s apartment Indeed, the bland apartment seems to fade away in the fanfare of the play. The narrator is within the Fourth Wall with the audience as he comments and guides us through the action.

And what of the fictitious play? It is a predictable musical with a Shakesperian-like comedy of errors, mistaken identities, love lost, love found, farcical elements and, of course, a happy ending. We not only learn of this play via the mind of the narrator, but interspersed throughout at certain key points, we also glean personal details of his life as well. The integration of the breaking of the fourth wall and the action on the stage is seamless.

Hunter Foster’s direction is brilliant. (Pillow Talking has enjoyed his directorial efforts previously in at least two productions of Million Dollar Quartet.) The music and lyrics by Lisa Lambert and Greg Morrison are wonderful and underscore a clever book by Bob Martin and Don McKellar. (It’s easy to believe that the origins of The Drowsy Chaperone began a spook of old musicals for a stag party.)

The entire cast, which is composed of triple and quadruple threats, is wonderful, with special nods going to comedic flares of John Rapson as the Latin lover Aldolpho, Danielle Lee Greaves as Trix the Aviatrix, Jennifer Allen as the Drowsy Chaperone, Blakely Slaybaugh and Parker Slaybaugh as Gangster #1 and Gangster #2, respectively. (They work so well together, you would think they were brothers.) There is great chemistry not only between Clyde Alves as Robert, the groom-to-be, and Stephanie Rothenberg as Janet Van de Graaff, the bride-to-be, but also a great bromance between Mr. Alves and Tim Falter as George, the groom’s best man. They do a tap dance number, “Cold Feets,” that kills. Other nods must go Ruth Gottschall who is the terribly proper Mrs. Tottendale and her loyal Underling,

Jay Aubrey Jones. They have a side-splitting spitting match that puts the one Abbot and Costello had in In the Navy to shame. Evan Mayer channels Pat Harrington’s portrayal of the quirky Superintendent, Dwayne Schneider, from the TV sitcom One Day At A Time. Rounding out this very talented cast is James Judy (Mr. Feldzig), Ruth Pferdehirt (Kitty) and a great ensemble including Abby Church, Bryan Thomas Hunt, Evan Mayer, and Gabi Stapula.

Last, but certainly not least, a plethora of kudos should go to John Scherer, the Man in Chair. His charm, wit and engaging manner made you want to listen to his musings about art, theatre, The Drowsy Chaperone, and his eclectic life in general. In many ways, he is the Mister Rogers of adult theatre, the nice man in the sweater, inviting us into his neighborhood to have the time of our lives.

Have I run out of superlatives yet? There are too many show-stopping moments to even count like the blindfolded gorilla on roller skates. Trust me, you just have to see it.