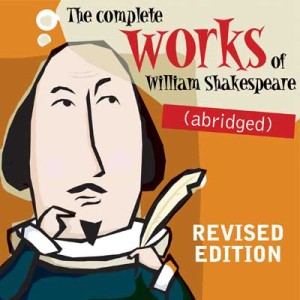 When I was in school, I had a relationship with a guy named William. But he really got around. For sure, I wasn’t the only one.

As for this connection of ours – it wasn’t romantic or anything. Not really. With Will, there was this language thing between us. He spoke to me. Through his works, that is. Shakespeare’s works. I read them. Well, I read some of them. Yeah, just a few. I think. But, um, which ones? (Insert a fair amount of hemming and hawing here.) TBH, I simply cannot remember exactly what I read. Okay, okay, suffice it to say, my adolescent connection with Bard wasn’t all that memorable (so calling it a “relationship” might have been overstating it – rather, we were more like “acquaintances”). Now, as an adult who has read countless books, seen a plethora of stage works and more than as many films, I’ve got a good case of Old English guilt. Should I have read more Shakespeare? I should have. Probably. Yeah, I think so.

But when I learned that Playhouse on Park was staging The Complete Works of William Shakespeare (abridged) [Revised], I immediately thought, I’m saved! Now I can slide effortlessly into any dinner party conversation with the requisite morsels of plot for his entire canon stashed away in my gray matter! And when my high-school aged children ask me about Othello or Macbeth or King Lear I won’t have to google it first! And for certain, my knowledge of psychology will be perfectly and pleasantly pumped up and punctuated by classic Shakespearian notions of the human condition. What more could one ask?

So did I get what it was that I was looking for? Did I walk out of the Playhouse a more cultured, learned person? Perhaps…

Perhaps? Whatever does she mean, you may be asking yourself. That’s because I did learn quite a bit – and it wasn’t in a classroom with bad lighting and a droning English teacher with snickering (or snoring) students all around me. This humorous play written by Adam Long, Daniel Singer, and Jess Winfield twists Shakespeare’s works into the most delightful pretzel, merging snippets of most of his canon, played by just three talented actors. Improvisation, wordplay, and lots of slapstick abound. 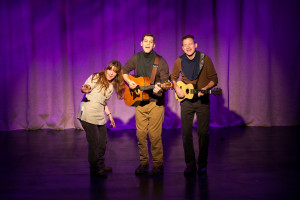 Fourth wall be damned, Director Tom Ridgely takes his actors, Hanna Cheek, Rich Hollman, and Sean Harris, from Romeo and Juliet to Antony and Cleopatra, from Macbeth to Hamlet and well beyond. Toss in a little Adolf Hitler, football, and FoodTV for good measure (Measure for Measure, that is), and you’ll never know what’s going to happen next. There’s audience interaction, backstage items which double for costumes, and a whole lot of goofing around. Overall, it’s a knock-down, drag-out good time (pun intended)!

This piece’s effectiveness is due, in great part, to the flexibility and talents of the trio. The intimacy of Playhouse on Park’s theatre makes it all up close and personal – just As You[‘ll] Like It (sorry, I couldn’t help it). Whether you’re a fan of the Bard or you just wish you could answer the literature trivia questions on your local restaurant’s tablet games app, this is the perfect show to hone those neural connections! And for sure, All’s Well that Ends Well!

The works of William Shakespeare are in the public domain. And so are the life and times of the man known as William Shakespeare. Which means, of course, that you can find the Bard of Avon just about anywhere in the world including in films, television, plays, on mugs, tee shirts, socks, and just about anything else one can conjure in his or her imagination. Remember Miramax’s 1998 romantic comedy Shakespeare in Love? And what about that new television series on TNT called Will about the lost years of Shakespeare? There is such a plethora of spins on Shakespeare that a word was created in our lexicon, “bardolatry.” Some aspects of the mythmaking surrounding Shakespeare probably have his ghost forever walking the world – oh, sorry, that was Jacob Marley in Dickens’ A Christmas Carol (I am confusing famous bards—my bad).

At least one spin – Playhouse on Park’s The Complete Works of William Shakespeare (abridged) [Revised] has audiences rolling on the floor laughing. The production is actually based on two different published editions of the play – one from 2000 and one from 2011. The original authors, Adam Long, Daniel Singer, and Jess Winfield, who started performing abridge, 20-minute skits of certain plays on street corners, designed the play to be fluid and adaptable to both the venue where it plays and the strengths and skills of the actors performing it. So it’s really up to the director and actors as far as how the play comes out. In many ways, it’s like the hilarious, long-running cable show Curb Your Enthusiasm where purportedly the actors were given a basic story line and were then left to improv the rest of the show. 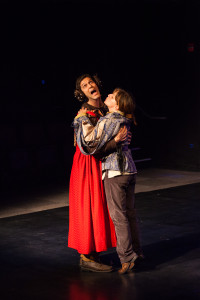 Fortunately for Playhouse on Park’s version, director Tom Ridgely and actors Hanna Cheek (Hanna), Rich Holliman (Rich), and Sean Harris (Sean) are spot-on in creating a thoroughly exhilarating, engaging, and hysterically funny play. I am too young (thank God) to remember vaudeville, but I’m willing to bet the farm that Complete Works is like vaudeville on steroids. Breaking the fourth wall and interacting with the audience abounds. How did the actors know the names of people in the audience? How much of it was written and how much of it was improv’d? We will never know, but all great acting and credibility derives from truth and spontaneity – and this play certainly seemed spontaneous.

As far as the actors playing the actual works of Shakespeare in 90-minutes? Well, there is a disclaimer of “abridged” in the title – and when it says abridged – it means abridged! If an actor merely mentions the title of a Shakespeare play, it gets credited as being “performed.” While I took a whole year of intensive Shakespeare in college and have seen countless Shakespeare plays, I am ashamed to admit that I drew a complete blank on certain titles like A Lover’s Complaint and Sir Thomas Moore. But I have heard and read In Quintum Novemberis – wait a sec – that’s Milton, not Shakespeare (confusing famous bards again).

I was so inspired by this play that I thought I would finish this review by using the complete works of Shakespeare. Playhouse on the Park’s The Complete Works is, Measure for Measure, a The Comedy of Errors and a The Tempest at times but is truly a play that is not Much Ado About Nothing and doesn’t go on for a Twelfth Night and like all good plays, All’s Well that Ends Well. – The Complete Pillow Talking Review (abridged).