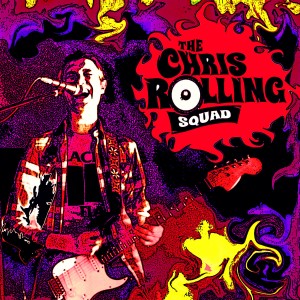 Chris Rolling is a singer, songwriter, and musician. Based in France, his bluesy music is global in nature, reaching from Europe to the heart of the Texas blues. He has an international following. We are pleased to offer this review by our Guest Blogger Rick Tedesco.

What can you say about a guy who opens his CD with a song called “Whore”? Personally? … I say HELL YES! Not to make this about me but when I did my solo CD a few years back and arguably the strongest track on the CD also was called “Whore,” everyone said No, you can’t make that the opening track … and I listened. Wish I didn’t. Thank YOU for not listening Chris!

Now, on to the CD. I’m happy to report track 1, “Whore,” punches you in the face with a kick-ass, high-energy drum intro followed by riffy rock guitar a la Alice Cooper’s Billon Dollar Babies. Good stuff! His guitar screams that instantly definable strat tone … very Hendrix in his approach. Track 2, “Help Me,” delivers more riff rock which I can never get enough of. He’s a throwback to when music didn’t suck. Hendrix, Robin Trower, Stevie Ray Vaughan, Mark Knopfler … the “strat gods” are very much alive in his playing. Track 3, “Redemption,” has some great bass lines by Brice Duval and his drummer, Romain Cauneau, does some excellent syncing with a blazing guitar solo any guitarist would envy. Chris has got himself a great rhythm section. Track 4, “Vampire Blues,” is a very cool, swanky, kinda 40’s blues number that I really enjoyed. Track 5, “Janet Says Go Go Go,” is the only cover song on the CD and it kicks some complete ass. He made it his own for sure. The songs are short, energetic, and to the point with no fluff.

The single criticism I have is the CD contains only 5 songs and I wanted more! Well done boys! 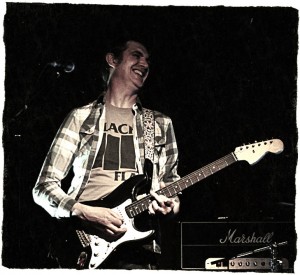 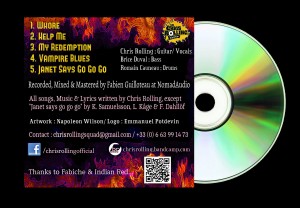 For More info or to order CD