Pillow Talking’s Review of THE BOY

Someday Productions LLC and Pillow Talking are pleased to present the following review of THE BOY by I.M. Nosferatu 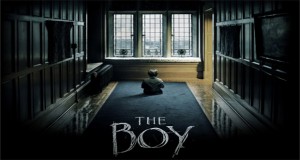 After much negotiating, we are pleased (we guess) to have this third film review by I.M. Nosferatu. We hope you like it. Although we’d love to send him back to Hell, he’s just such a damn good writer. Remember the classic novel A Clockwork Orange by Anthony Burgess? It had a glossary so you could understand the protagonist. I.M. Nosferatu’s glossary — which you will need to know to fully enjoy the review — is below.  And now, here is the review of The Boy by Mr. Nosferatu.

The Boy is noteworthy primarily because of actress Lauren Cohan. She definitely is on the rise to becoming the new Queen of Horror between this film and her portrayals of “Maggie” on The Walking Dead, “Bela” on Supernatural, and “Rose” on The Vampire Diaries. Yes, I can see her pushing that bloody tiara right off the head of Scream Queen Jamie Lee Curtis. (It’d also be great to see Curtis’ entire head rolling right off her shoulders, but that’s just me. That’s how I roll. I know, gruesome — insert evil laugh.) 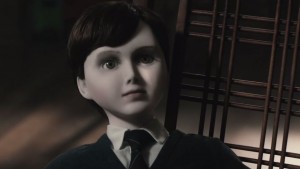 The Boy is a British-Canadian film with a handful of characters. I find it rather twisted that Lauren has to use an American accent when cast in a role in her own country. Anyway, the plot is frightfully thin – an older couple, Mr. and Mrs. Heelshire, hires an American girl with a past, Greta Evans (Lauren), to be a nanny for their son, Brahms, while they go off on a long-overdue holiday. Aside from the fact that their boy is a dummy, something feels completely bizarro. And no, I’m not being politically incorrect here – the boy has ceramic head. He’s better looking than Chucky and a far snappier dresser, but still resides somewhere deep in Creepsville. Indeed, Brahms seems to have a mind (and soul) of his own. Without saying a word, he ends up convincing gullible, vulnerable Greta that he is 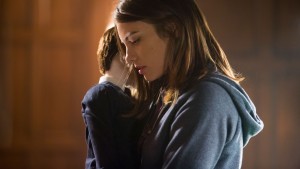 in fact alive after she’s ignored both him and all the rules Mum and Pop have left for her. No more sipping wine in your nightie and talking on the phone to your bestie, Greta, you’re getting paid to work! After a hairy stint in the attic, before you know it she’s reading him his lessons, carrying him around like an infant, and even kissing him goodnight (I’d take one of those). Anyway, wow – who knew you could get the girl just by sitting there and looking so cute creepy and helpless – I personally have to resort to much greater lengths to get a girl, but that might entail rope or weapons or threats of fire and brimstone – but we won’t go there, now will we? And then what the hell? Young stone-faced Brahms is so damn good, he goes on to convince Greta’s new love interest and master grocery delivery boy, Malcolm (Rupert Evans), that he’s a real boy, too. What are you? Stupid? 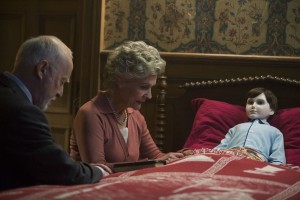 Overall, the premise is SICK but the Mr. Hyde part of me says it could have been a really HORRIFIC movie if it hadn’t jumped the shark midway through – but I’m not going to tell you how (the voices in my head say NO SPOILERS, damn them). Up until then it was creepy, unsettling, and rather thoughtful. I mean, it was almost as if Greta was becoming some sort of Stepford nanny. She’d spend all day reading to this Chucky clone and we had no idea why; was she spiraling into madness? Just my kind of girl! But after the plot twist? It was just meh. Predictable. A dime a dozen. And definitely not enough RED. What I need is a real SHARK ATTACK to get my world rocking.

Then again my Dr. Jekyll side can appreciate a good peripeteia. After the movie shifts directions, the pace really moves and the characters get that blood coursing through their veins (still not the spewing and spouting RED I’d have wanted, but a guy can dream). The storyline transition took us from psychological thrills to horror chills, in a Jason-esque sort of way. Anyway, when my shrink was alive he’d tell me to just accept the things we can’t change, so I guess this would be a good time to try. Too bad I can’t ask him. Poor guy. 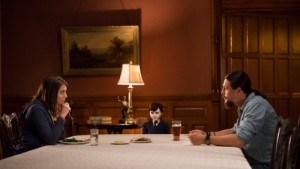 As for the cast, Lauren was RIPPER SMOOTH as always in the role of the strong heroine – I’m a fan. Rupert Evans was pretty solid playing second banana to Lauren. Jim Norton as Mr. Heelshire and Diana Castle as Mrs. Heelshire are perfectly peculiar and entirely screwed up; and Ben Robson as Greta’s ex, Cole, makes a great punk ass loser and abuser. But the real star? The ceramic kid – that is up until the final denouement when we learn the mystery to the dummy’s existence. Then his acting falls to pieces.

Depending upon where you look, The Boy is a film touted as “mystery/thriller,” “psychological horror,” and “horror/mystery/thriller” – it’s obvious everyone can’t seem to reach a collective decision. I guess I should have had lower expectations since the gods of Movieland didn’t just give it the KRUGERIAN horror stamp of approval. So did I like it? Such is the dissociative personality that I am, I can’t make up my mind just as the flick couldn’t. My bad. You’ll have to see it for yourself.