Pillow Talking’s Review of THE 39 STEPS 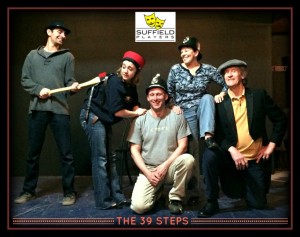 Even though we’ve only just made our second visit to see the Suffield Players at Mapleton Hall in sleepy Suffield, CT, we have come to expect top-notch, even daring productions. It is obvious that despite its diminutive size, this town knows theatre and its Players are willing to take risks with their varied and dynamic works. This time, perspicacious director Roger A. Ochs brought Alfred Hitchcock’s farcical The 39 Steps to the stage and did so with verve.

The 39 Steps has a long history – a 1915 novel by John Buchan became a 1935 Hitchcock film. The play version originally was penned by Simon Corble and Nobby Dimon in 1995, and then adapted by Patrick Barlow in 2005. Intended to be cast with four actors playing multiple roles, Suffield’s production included a fifth actor. 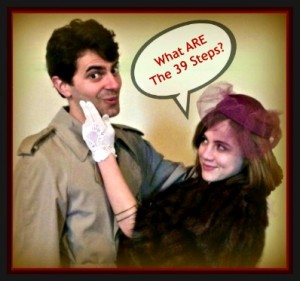 With all the delightful retro feel of the genius of Hitchcock, Tony Award-winning The 39 Steps is an inventive spoof on the classic spy action-drama with a ton of physical comedy. At its center is the lackluster life of the aimless Richard Hannay, who by happenstance, meets an exotic and mysterious woman one night at the theatre. When she fires a gun into the crowd then asks to go home with him, his head is spinning; he knows only that she is trying to save England, but from whom (yes, who are The 39 Steps?), he has no idea. When she soon meets her untimely end, that’s when things get really bumpy. But Hannay’s isn’t the only head that’s likely to spin – so buckle your seatbelts because this is one wild ride!

As the plot thickens, dozens of characters shuffle on and off the stage, gyrating around Hannay like a well-choreographed ballet replete with slapstick, gymnastics, and handcuffs. With multiple hat, hair and costume changes (sometimes right before your eyes!) the action is fast-paced, even frenetic. If you look away just for a moment, you’ll be likely to miss something. And even if you keep your eyes glued to the stage, you may miss something anyway! 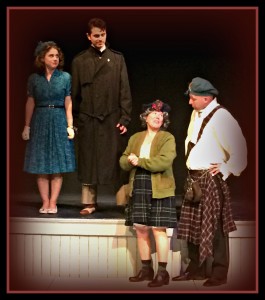 Tyler Wolfson in his first role at Suffield is a self-professed lover of linguistics who brings incredible charm (and a great accent) to the protagonist, Richard Hannay. He is believable and endearing as the bored but dashing everyman-turned-fugitive-turned-hero. And inside jokes be damned, nice job with the mustache, Sir! Congratulations on your debut with the Players – please come back again!

Libby Miserendino as the foil to Hannay’s humdrum life, Annabel[la] Schmidt is fabulous; this also was her first time with the Suffield Players and we hope she returns! Miserendino also plays Pamela, who becomes attached to Hannay’s adventure in his quest for innocence both literally and figuratively. Miserendino is captivating, adorable, and always snarky, all rolled into one. 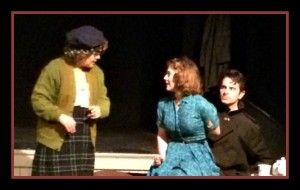 Gallow sports a great resume and is no stranger to CT theatre. Fantastic in each role, I may have loved her best as Margaret, the Crofter’s Wife, resembling a grown-up, rather kooky version of “Heidi.” Rogowski slipped with ease from role to role, a veteran with the Players, he now considers himself a real clown – a well-deserved moniker for his sidesplitting buffoonery. And Wandzy impresses beyond imagination as Mr. Memory, the fact-spewing stage performer whose recitation of a secret formula will knock your socks off. As he rambles on, he looks like a robot about to self-destruct.

Tremendous kudos to Ochs in directing this piece. From what we can tell, The 39 Steps was just up his alley and meshes well with his wry sense of humor. And we were told this production took a village – because of the myriad costume changes, many hands were needed backstage (Dawn McKay as costume advisor, Anna Marie Johansen and Mary Fernandez-Sierra as costume dressers). Shout outs to the entire staff, including Patricia Howard for lighting design and operation; Nick Diakostavrianos for sound design; Bob Williams as prop master. Of course the set design – including the incredible balconies and train – Art Christian, Vanda Doyle, Barbara Gallow, Tricia Howard, Dorrie Mitchell, R. A. Ochs, Mark Proulx, Dana T. Ring, Konrad Rogowski, Kelly Seip, Steve Wandzy, and Jerry Zalewski.

You truly have to see it to believe how the four actors can deftly slip in and out of multiple roles, while the lead keeps his head about him. It is hilarious, laugh-out-loud, lighthearted fun. Catch it before the train rolls away!

When an actor comes to me and wants to discuss his character, I say, “It’s in the script.” If he says, “But what’s my motivation?” I say, “Your salary.”    — Alfred Hitchcock

Nestled in the foothills of Connecticut on the border of Massachusetts (ok, maybe not the foothills, but somewhere out in the middle of nowhere to a NYC guy like myself) is the little train that could. I am referring, of course, to the Suffield Players. Like the bumblebee who doesn’t know it is physically impossible to fly, the Suffield Players continue to stage impossible productions given their size, resources, and spatial limitations and manage to pull them off with complete aplomb. It was true with their previous production of Night Sky and it is equally true of their present production of The 39 Steps.

The play version of The 39 Steps was adapted from a 1915 novel by James Buchan and the 1935 film version by Alfred Hitchcock. Patrick Barlow rewrote the adaptation in 2005. The play, originally tagged as a melodrama, evolved into more of a farcical genre. And how can it not be when five actors are given the task of playing more roles than a playbill will hold. In order to pull off something like this, you need the 3 Ds of production. You need: 1) damn good actors, who take 2) damn good direction, and a 3) damn good director. 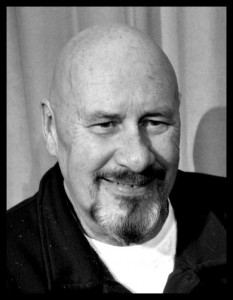 I am pleased to report that the Suffield Players’ production of The 39 Steps had all 3 Ds in spades! Roger A. Ochs’ direction is a tour de force of staging, blocking, acrobatics (yes, you read that correctly), slow motion sequences, lighting effects, sound effects and so much more that I probably don’t even know about. And why shouldn’t his direction be brilliant? He has 56 years in theatre (34 of them with the Suffield Players). I don’t know how old he really is, but he doesn’t look more than 35. As Alfred Hitchcock (“Hitch” to his friends) said, “And when people today say I’m 70, I say that’s a confounded lie. I’m twice 35, that’s all. Twice 35.” Mr. Ochs, like Hitch, has a great sense of humor and one can see it in every joke, prat fall, and double entendre in the play. (I’d love to see the original script juxtaposed to Roger’s marked-up version to see how he pushed the envelope at every turn.)

The small cast was positively brilliant. I lost track of how many characters they were playing by the quarter of the first act. Although Tyler Wolfson as the hero Richard Hannay was the only actor not playing multiple parts, his role was daunting and demanding in both a physical and mental way. Indeed, he had to conquer large blocks of accent- 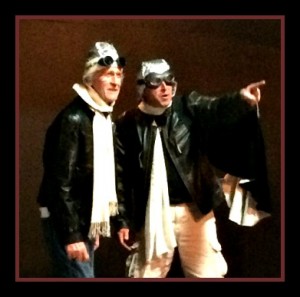 laden dialogue. His accent was spot on. He also exhibited some nice acrobatics (reminded me of Errol Flynn and Burt Lancaster) – especially in handcuffs (yes, you read that correctly, too). He also was adept at milking the crowd for laughs with smarmy smirks or vain hair and moustache patting (yes, the pencil moustache was a nice touch). The performances of the remaining ensemble were simply sublime. Relative newcomer Libby Miserendino billed as Annabel was charming, engaging, and funny in all of her incarnations. Like Mr. Wolfson, she had somewhat of a daunting physical part playing a fairly lengthy sequence handcuffed to her co-star. (The handcuffs were real too – I saw the marks on her wrist after the show). Veteran actress Barbara Gallow billed as Clown 1 proved that she can play just about any role on the planet, and she played them all with incredible grace, humor and alacrity. Equally versatile were Konrad Rogowski (Clown 2) and Steve Wandzy (Clown 3). Slipping from one part to the next like smooth snake oil salesmen they were a virtuous team that, like a train wreck, you couldn’t help but watch. 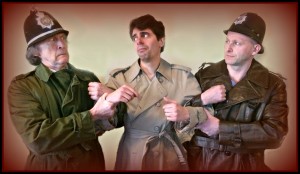 The plot is too complex, convoluted, and frenetic to go over in a short review – especially without spoiling too much of the action. Suffice it to say that The 39 Steps conjures images of all of those classic spy spoofs of yesteryear; think Mike Myers in Austin Powers; David Niven in Casino Royale; Dean Martin in the Matt Helm franchise; and Don Adams in Get Smart. Here the plot is secondary to the comedic acting and timing displayed by this great cast. There are all types of humor ranging from smart, intellectual, linguistic turns of phrases to downright Chaplin-esque comedy.

Yes, the Suffield Players is the little train that could. I’d love to tell you more about the train, but that would be a huge spoiler. You will just have to see it for yourself.

Hitch also once said that the length of a film should be directly related to the endurance of the human bladder. My advice to you is to make sure your bladder is empty before you see it because the amount of side-splitting laughter you will do during the performance may put undue pressure on it and believe me, you wouldn’t want to miss a moment of The 39 Steps waiting in line for the rest room.