Pillow Talking’s Review of THE 39 STEPS at the RTB

Smith: Listen, I’m going to tell you something which is not very healthy to know, but now that they have followed me here, you are in it as much as I am. Have you ever heard of the Thirty-Nine Steps?

What is The 39 Steps? For cinephiles, it is the classic film by the master of suspense, Alfred Hitchcock. For bibliophiles, it is an adventure novel by Scottish author John Buchan. For theatre historians, it is a four-character play with original concept by Simon Corble and Nobby Dimon, based on both the novel and film and adapted by Patrick Barlow. For the theatres that perform The 39 Steps it can be anything from melodrama, to spy spoof, to straight out comedy.

For the Ridgefield Theater Barn, The 39 Steps means a side-splitting, hysterical comedy-farce showcasing four very talented, comedic actors and a director with a devilish sense of humor and satirical wit.

Let’s talk about the plot…NOT! The plot is so confusing, although with each version I see, I glean more about what is going on. Suffice it to say that Richard Hannay is the hero who gets involved with spies, murders, secret formulas and playing musical seats on a train. What are the “39 steps”? I won’t spoil it for you, although the specific definition has varied from version to version depending upon Mr. Memory’s (the character who explains it) ability to use the James Joyce technique of stream of consciousness. 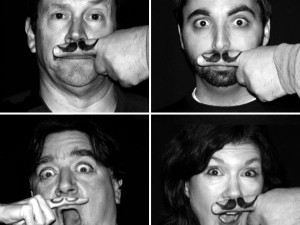 The cast works together as a brilliant integrated, comedic ensemble. Bob Lussier plays Richard Hannay, the hero, for the most part, straight up with a wry sense of humor and British aplomb and serves as a perfect comedic foil for the other “Clowns” as they are called in the cast of characters. His bio states that he “is praying that he can keep it together during this run without it turning a Tim Conway moment.” But for those of us who are old enough to remember The Carol Burnett Show, Tim Conway and Harvey Korman were at their funniest when they would deliberately try to break each other up on camera. Mr. Lussier broke up his fellow actors on stage more than a few times and the result was hilarious. Suzanne Powers was delightful as playing Annabella, Margaret, and Pamela. She made each character different, yet charmingly engaging. And what can I say about Matt Austin as Clown 1 and Joe Harding as Clown 2 who play countless characters? What a bunch of bozos (no pun intended). They make a perfect comedy team – their antics reminiscent of Conway and Korman, Abbott and Costello and even Martin and Lewis. They were at their best when they were breaking the fourth wall and involving the audience in the action or breaking each other up. The references to the limitations of low budget, community theatre came fast and furious as did pratfalls, double entendres and Hitchcockian homages.

Kudos must go the comic vision of director Katherine Ray. I don’t know what was funnier, her creative direction of the play or her bio. Not only did I learn that xenuphobia is an extreme fear of Tom Cruise, but that Ms. Ray also is into necromancy (raising the dead) since she is being stalked by the legendary Dennis Hopper who passed away in 2010.

One should see RTB’s The 39 Steps as many times as possible. I am certain that with this cast and director there will be different ad libs, more pratfalls, more farcical elements and additional surprises with each performance.

It isn’t merely because you can bring along your favorite beverage and take out meal to enjoy before the show. And it isn’t just that as you enter, the staff is friendly, warm, and welcoming, helping to radiate the electric air of what’s to come on their well-tread boards. And it also isn’t simply that the cozy, intimate atmosphere of the round-table, cabaret design lets you share pre-show conversation and mid-show laughter, or surprise, or tears, or all three. Instead it is this: The Ridgefield Theater Barn (RTB), now in its 51st season, is top-to-bottom, all around, fantastic entertainment.

Their most current offering is wildly imaginative The 39 Steps, adapted from the 1915 novel by John Buchan and the 1935 film by Alfred Hitchcock; then adapted for the stage by Simon Corble and Nobby Dimon, and later rewritten by Patrick Barlow in 2005. This four-person, feverishly spirited masterpiece is a feast for the senses. It’s a spy story of rib-tickling proportions with romantic encounters, outrageous adventures, mistaken identities, and myriad quick change-ups which morph two “Clowns” into every kind of character imaginable. 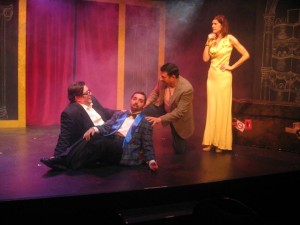 Richard Hannay (a fabulously desperate Bob Lussier) is a dapper, yet hapless oaf who bumbles into the beguiling Annabella (the delightful Suzanne Powers who also plays Pamela and Margaret) while out one night at the theatre. He finds himself in quite the dilemma after shots are fired and backs are stabbed; he’s then set on a dangerous course to uncover the secrets of “the 39 steps” left to him by the mysterious woman; and more than once, narrowly escapes with his life. Through a series of misadventures he crosses countries, travels by foot, train, and car, and meets everyone from a quirky milkman, to a jealous Scottish farmer, to an unnervingly odd, fingerless professor, to a strange stage performer named Mr. Memory – all played to the hilt by the insanely talented Matt Austin (Clown 1) and Joe Harding (Clown 2).

Expect broken fourth walls, characters racing through the audience, and objects thrown to the control booth above and in the back of the theatre. Expect dizzying plots and subplots, popped balloons, and boundless madness. But mostly, expect a production that is exceptionally spot-on, under the capable direction of Katherine Ray, and which serves to spotlight the talents of four veterans of the Connecticut community and regional theatre circuit.

Shouts also to the entire company for their plentiful contributions including David Zahacewski as lighting designer and Billy Gillies as sound designer. Kudos to Nick Kaye for terrific (and oftentimes amusing) set construction as well as the other numerous hands which aided in set crew, properties, and overall production.

Murder and mayhem abound in The 39 Steps. It’s clever. It’s suspenseful. It will have your sides aching and tears of laughter spilling down your cheeks. Thank you RTB!