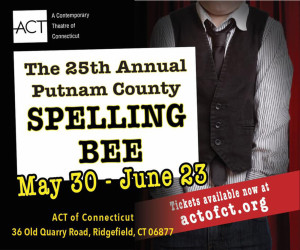 When I asked my Google Home how far it is to Broadway, she told me I’m 71.1 miles away by car. When I then asked her how far it is to ACT of [Ridgefield] Connecticut, she told me I’m just 10.6 miles away by car. In my humble opinion, not only is the almost 60-mile difference a major factor, but after seeing ACT’s The 25th Annual Putnam County Spelling Bee, one hardly needs to go further than their own proverbial backyard to see great, and I mean GREAT theatre (that is, if you live in CT as I do, but it’s well worth the drive if you don’t!). Not only was this my first time seeing this particular production, but also my first trip to ACT since they opened last year. On both counts, I don’t know what I was waiting for, but I must say my evening of firsts was a true delight. ACT’s Spelling Bee left such an indelible impression that it has been firmly and forever planted in my gray matter and it is now my gold standard for any future incarnations of the musical.

Going into it, I knew very little about the production, except that, well, it was about a spelling bee (duh!). I guess this is as good a time as any to disclose that I won my own middle school spelling bee and was dubbed “The Heroine of this Bee” in the newspaper headline after spelling my final word, heroine, beating out a classmate who was one year ahead of me. But alas, I digress… What I was not expecting was for Spelling Bee, conceived by Rebecca Feldman, with Music & Lyrics by William Finn, and Book by Rachel Sheinkin, with Additional Material by Jay Reiss, to be knock-down drag-out fabulous from start to finish. It is expertly directed by Michelle Tattenbaum and phenomenally cast, with brilliant set design all in a beautiful venue which doesn’t have a bad seat in the house.

When a motley group of bright, yet quirky students come together for the 25th Annual Putnam County Spelling Bee at Putnam Valley Middle School, words are spelled, personalities clash, stories are told, and people shine (and one in a rather snotty way, perhaps because of a rare mucous membrane disorder and perhaps because he’s also a brat). In addition to the well-conceived and very colorful cast of students, the three adults who run the bee are quite outrageous themselves. This really is one of those productions that has you laughing out loud until your sides ache.

There is just so much good stuff here, that if you haven’t seen Spelling Bee, I don’t want to be a spoil sport and give it all away. But by far one of the most surprising elements is that prior to the start of every production, audience members are selected to join the actors on stage and must ad-lib (with some minimal direction) as fellow middle school competitors. You never know what you’re going to get on any given evening, however, you will find that their spelling words are at a simpler level if you will – really kindergarten level – much to the “real” students’ dismay.

This production features a true ensemble cast and everyone in it delivers in the best ways possible. In order of appearance, the students are: Colin Miyamoto as Chip Tolentino (who also plays Jesus). He is hysterical, most especially when his budding pubescent interest in girls becomes an uncomfortable and noticeably embarrassing distraction from his spelling skills. Emma Tattenbaum-Fine as Logainne Schwartzandgrubennierre is adorably marvelous with her lisping spelling as well as her stalwart desire to be politically correct and to please her two fathers. Graham Baker as Leaf Coneybear (and one of Logainne’s dads) is the hippie-ADD-tripping/trancing guy you’ll want to invite to every one of your parties. Phil Sloves as William Barfee on the other hand, is probably the guy you don’t want to invite to your parties, but you come to love, nonetheless. Sumi Yu as Marcy Park may have the biggest arc – she’s the poster girl for overachievement but she’ll surprise you in the end. Morgan Billings Smith as Olive Ostrovsky will steal your heart – she’s the little girl you just want to hug and for whom you’ll also want to empty your wallet.

As for the adults, Amy Hutchins as Rona Lisa Peretti (and Olive’s mom) is the slightly cloying former spelling bee champ and moderator, who is both perfectly cast and perfectly wonderful in both roles. John C. Baker as Douglas Panch is terrific as the frustrated Vice Principal whose undisclosed “incident” at the 20th Bee drove him to a five-year absence. (But I have to say, I just really want to know what he did!) Ryan Williams as Mitch Maloney (and one of Logainne’s dads as well as Olive’s dad) is outrageous as the “Official Comfort Counselor” who’s doing community service with the kiddies, giving juice boxes and escorting out the losers – and this is a guy who knows about losing since we learn he’s an ex-con (but what the heck, working with kids has to be good for him, right?).

This is one I’d see again and again, so long as I don’t have to spell some of those words – since my middle school days, we’ve all conveniently advanced to spell check and Google, whew! Thank you ACT for bringing exceptional works like Spelling Bee to Fairfield County and we can’t wait to go back!

Okay, I admit it. I avoided seeing The 25th Annual Putnam County Spelling Bee for the longest time, even when it was getting raves on Broadway. In school, I considered spelling to be one of those nefarious subjects like penmanship or gym. Because somebody was more agile than I was and could climb a rope to the ceiling, that meant they were worthy of receiving an A? Thank goodness my reviews are typed as my wife and co-reviewer says that my handwriting resembles that of a psychopath.

But, finally I bit the bullet and saw ACT of Connecticut’s wonderful production of the musical and it cured me of sesquipedaliophobia (which is actually the fear of long words, but the closest I could come to finding something related to spelling bee phobia). ACT’s version of The 25th Annual Putnam County Spelling Bee, directed By Michelle Tattenbaum, was thoroughly engaging, entertaining and at, times, side-splittingly hysterical, conjuring up those long-forgotten images (for me anyway) of middle school. Ms. Tattenbaum has an eye for comedic timing and pacing. Indeed, one may think that the idea of a spelling bee for a play is a one-joke idea that would run out of steam, but this is definitely not the case here. The play zipped along with a steady dose of humor that was more consistent than a canned laugh track on a sitcom.

Of course, having a talented choreographer (Ilanna Ransom Toeplitz), music supervisor (Bryan Perri), and musical director (Katya Stanislavskaya) among other key positions, certainly helps. It also helps to have a cast of triple threats who can do it all.

Although in my estimation, the entire cast worked as a seamless ensemble in song, dance, and acting, if I were to give out a teacher’s pet apple or two, one would go to Colin Miyamoto as Chip Tolentino whose musical number “Chip’s Lament” is not only a riot but a relatable issue among prepubescent young males. The second apple would have to go to Ryan Williams as Mitch Mahoney whose arc of character spans from a Sha-Na-Na-type felon to sensitive father.

All in all, we are lucky to have ACT as a new venue for exposure of the arts (one cannot have enough these days) and Pillow Talking looks forward to more offerings from this company.

NB: If there are any typos above, blame it on the damn auto-correct.