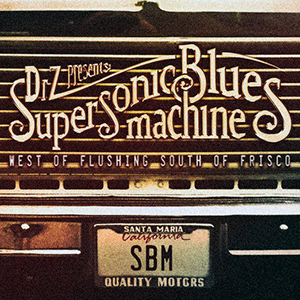 When Blues great Joe Louis Walker was asked, “Why do you love the blues?” he responded, “The blues is the facts of life.” (Pillow Talking Interview)

Lance Lopez, Fabrizio Grossi and Kenny Aronoff decided to create a super band based on their love of blues and rock so they formed the Supersonic Blues Machine. For their first offering they assembled a virtual “Hall of Fame” of blues musicians to guest on their first album. The result is West of Flushing South of Frisco.

Get ready to salivate like Pavlov’s dog over the list of talented, eclectic, and famous musicians who are all appear on one album:

Lance Lopez on guitar, Fabrizio Grossi on bass, and Kenny Aronoff on drums are the meat and potatoes of this CD which is enough of a pedigree in its own right BUT then lets add in some spices, shall we? How’s about Billy Gibbons, Warren Haynes, Chris Duarte, Eric Gales, Walter Trout, and last but certainly not least Robben Ford as guest guitarists…I mean, COME ON! The only thing missing is a way to reincarnate Stevie Ray Vaughan and get him on here

And the best thing about it is that it sounds like one big jam session: just a bunch of friends and musicians getting together, jamming and having a great time – which was Lance Lopez’s original intention. The diversity of styles on the rock/blues spectrum is staggering. Indeed, the album provides a veritable aural feast whether it’s the bluesy “Miracle Man”; the driving rhythms of “Bone Bucket Blues” with the gritty vocals of Lance Lopez; the jazzy/bluesy slower piece “Let’s call it a Day” featuring Robben Ford; the distinctive sound of icon Billy Gibbons (there is no mistaking that ZZ Top vibe) on “Running Whiskey”; the poignant lyrics and sharp Texas-blues guitar of Chris Duarte on “That’s My Way”;  the retro feel of Walter Trout’s “Can’t Take It No More” that harkens back to the days of classic blues; the haunting lyrics and guitar playing of Eric Gale in the more rock than blues “Nightmares and Dreams”; and finally the great Warren Haynes (Allman Brothers Band, Gov’t Mule) providing a distinctive Allman-country type flavor to “Remedy” with both some sweet guitar playing and ultra cool lyrics.

Okay, okay. Allow me to elaborate a bit.

If you are a fan of any of these guys you need to own this CD. And if you’re not, this CD will make you one! It should come with a warning label stating: “Warning: The music on this CD is so good it may make you lose all control.”