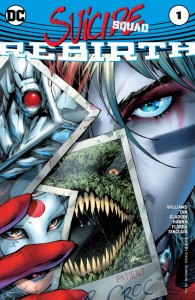 Over the next few weeks, DC’s Suicide Squad will continue to flood the media nonstop. If somehow you actually haven’t heard about Suicide Squad, despite the fact that it is advertised and discussed from early morning to late night on TV, radio, and all across the internet, let me fill you in. Suicide Squad was created by Robert Kanigher and Ross Andru in the late 80s but it has evolved over the years. The Squad essentially is a revolving door of super villains (from Harley Quinn to Killer Croc) who are under the watchful eye of Amanda Waller. Waller directs Task Force X in Secret Black Ops around the globe serving American interests in places where the military cannot go themselves. So they trust super villains to save the world? Well, yes, but personally, I’m not sure if planting bombs is something to be trusted…In this Rebirth one-shot, Rob Williams hinges the story on several things including bringing in a new member, a meta-bomb detonated in Mongolia, and even Obama himself who makes a cameo.

The issue opens with President Obama meeting with Waller to discuss (although it borders on berating) the way Task Force X is run. Obama is a little late in finding out about the Suicide Squad and sees it as a stand against American values without due process and wants the team to cease operations. However, much like other of Obama’s ideas, this is shut down when Waller lights into him – she insists they must persevere whether or not it’s pretty. (As you will find out later in this issue or the film, she’s 100% right!) She not only gets the President to come around to keeping the team intact, but also to get him to release their new captain, Colonel Rick Flag. Pretty decent negotiating right there!

After Waller’s trip to the Oval Office, she takes a trip down to GTMO to spring Flag with a Presidential pardon. Flag is surprised that anyone knows he’s there and was even more so when he finds that she knows about his past. Flag had been arrested after refusing to be a part of an illegal suicide mission – the rest of his platoon went ahead and the outcome was as he feared. He has some early complaints about Waller’s offer to join the Squad because of the group’s morality but aain with Waller’s powers of persuasion, she’s able to pull him around to leading the group of rabble-rousers. (Two-for-two – Amanda’s on a roll!)

Now here comes the BOOM both literally and figuratively. The Squad (Harley Quinn, Boomerang, and Deadshot) are in Inner Mongolia tracking down meta-gene researcher Mark Ljungberg, whose latest gift to mankind just might end it. Ljungberg has been taken captive when his meta-bomb falls into the wrong hands, The Dogra War. With Ljungberg held under Chinese protection, it forces the Squad to go in with guns blazing. Now what do these bombs do, you may ask? They can turn super humans powerless and give the reverse to normal people. This would leave a city defenseless, dive-bombed by an onslaught of super-powered criminals. The gang is able to detonate a bomb turning the Meta Army back to normal. Ultimately, everything is righted in the end with the exception of Ljungberg who has been brutally killed and Boomerang who has lost both of his hands – but they retrieve the research, so happily ever after, right?

While the story was good, the art is where this issue really becomes enjoyable. The entire artistic team from penciling to coloring is exceptional. With decent outlining and a dark and grim color style, this is really what Suicide Squad should be. My one complaint is that the inking doesn’t quite gel as there are three inkers who each have a different style – it becomes a bit jarring as you flip through.

Like many of the other Rebirth series this reverts some the aspects post-The New 52, most notably with Waller’s appearance. Overall this is a decent addition to Rebirth and I would look to this going forward as a good series. One downside is the limit of characters in this issue and the missing presence of some of the other notable members. Seemingly, this was a stylistic choice as most of the series revolved around Waller and Flag.

*Rant*    What is it with Suicide Squad?? Joker looks like a System of a Down groupie! IMO, this comic is better than the movie.    *End Rant* 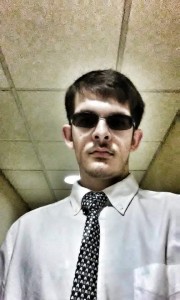