Someday Productions LLC and Pillow Talking are pleased to present the following review of STILL LIFE with IRIS at the Hole in the Wall Theater in New Britain, CT.

“Since I was a kid, I’ve been fascinated with the concept of identity. What makes me…me? Was I born this person or am I who I am because of things I’ve done and seen?” 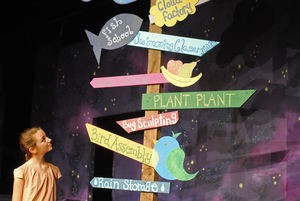 Hole in the Wall Theater’s Tony Palmieri asks these and other questions in the program notes for his recent directorial endeavor, Still Life with Iris. And these queries not only are at the core of the play, but also are issues that have vexed psychologists and philosophers alike. But the answer isn’t a simple one, as Still Life attempts to show. Who we are is intimately and inextricably tied to one’s entire lifetime of experiences – those things which not only have shaped and molded us but that which serve to inspire and motivate us forward as well. Our personal history gives rise to all of our thoughts, feelings, and behaviors. As a psychology professor and psychotherapist, I address these matters every day.

Palmieri plunged into the very depths of the identity enigma with Steven Dietz’s Still Life with Iris, transforming the intimate black box theatre it into the fantastical imaginary playground known as Nocturno – the veritable factory for all the stuff of the world. Still Life weaves the tale of Iris, a young girl who lives in Nocturno with her mother. All of the residents have jobs – painting flowers, bottling thunder, or putting spots on ladybugs, to name just a few. As they go about their lives, everything they do and everything they are is embedded into the threads of their own personal “Past Coat” which is like a wearable scrapbook of their lives. 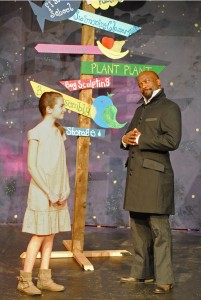 Enter Mr. Matternot, a servant who has been instructed to bring young Iris to live with and become daughter to the “Great Goods,” the rulers of Nocturno. Iris has been chosen as the single “best” little girl (because there only can be one best of anything, don’t you know?). In order for Iris to go willingly (more or less), she is forced to remove her Past Coat so that she doesn’t remember her life. When a button falls off the coat, the memory-less Iris feels compelled to find its owner. All she has to guide her is the button, a yearning, and a still-life image of her home.

This vibrant, colorful production speaks to audiences of all ages, and is the first play written for young people to have received the Kennedy Center’s Fund for New American Plays Award. It easily engages children with its fanciful costumes and humor, yet touches upon the deeper themes about identity that more mature audience members may ponder. 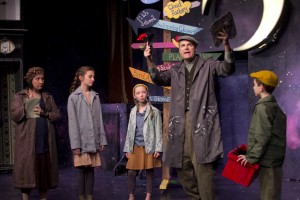 Palmieri skillfully directed a large and wonderful cast. Iris, played by the young and talented Peyton Stehle, was both wide-eyed and wise, exuberant and fearless, as she searches for the story of her life. Drew Brathwaite expertly morphed from Man to Mister Matternot to Thunder Bottler with his booming voice and terrific stage presence. Iris’ friends Hazel and Elmer, played by Allison Coney and Ian Rothhauser, respectively, were perfectly adorable (they also doubled as Captain Also and Third String). Kelley Mountzoures was fantastic as Memory Mender and Ray (as well as other, smaller roles). Roy Donnelly added fun and fantasy as Nocturno’s Flower Painter and Bolt Bender (and other roles). Neo Valentin stole numerous laughs as Iris’ new friend, young Mozart, and he doubled as the other Thunder Bottler. Briana McGuckin was quirky and feisty as Annabel Lee, and she also doubled as the Leaf Monitor. Stephanie Layne was the ideal, loving mother to Iris as well as the dutiful but melancholy Miss Overlook. And two characters who were as colorful as one can get – Grotto Good and Gretta Good, played by Adam Cormier and Mairin McKinlay, respectively – had the audience in stitches. Elitist, nonsensical, extreme perfectionists, they gave incredible life and depth to the caricature-like rulers of Nocturno (reminding me a bit of Helena Bonham Carter and Sacha Baron Cohen’s Thénardiers from Les Misérables). 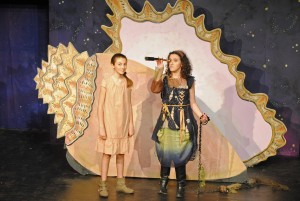 Man-of-many-hats Palmieri also was responsible for set and scenic design, the latter of which was co-created by Stephanie DeMarco; exceptional set construction (and technical direction) was executed by Bill Arnold. Stage crew ably moved the large and impressive set pieces between scenes. Kudos also to Jim Williams for sound design, Kate Bunce for costume design, Lisa DelCegno and Caleb Warner for props and set dressing, Warner for lights, and Christiana Giannelli for sound.

In sum, this was a magical night of wonder and imagination. Dietz’s work, in the capable hands of Palmieri, blurred the lines of reality and fantasy – which is what we may all hope to accomplish when we create beautiful works of art in any medium. Still Life with Iris is a journey back to childhood – to a time where everything is larger than life and our possibilities are endless. Hurry to New Britain’s Hole in the Wall soon, however, because unfortunately, this play’s run isn’t endless!

What do you get when you mix together a dash of Alice in Wonderland, a pinch of Peter Pan, a smidgeon of Joseph and the Amazing Technicolor Dreamcoat, and a teaspoonful of The Wizard of Oz? You get Tony Palmieri’s smartly directed version of Still Life with Iris. And I, for one, am glad that Mr. Palmieri didn’t take the advice of W.C. Fields. The play, written by Steven Dietz, not only shows off his creative direction, but the acting talents of several area children. 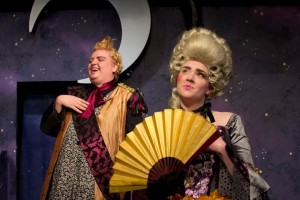 While you and I blissfully sleep in our beds at night, the inhabitants of Nocturno run around creating everything we see in the daytime from leaves on trees to polka dots on ladybugs. (My favorite was how they bottled lightning!) But every fantasy world must have its fantasy villains. In Noctourno, it’s the Goods (yes, an oxymoron for sure). The Goods are a narcissistic, hedonist, gaudy couple who seek out the most perfect things in Nocturno and then steal them for their own selfish pleasure. The Goods, respectively played by Adam Cormier (Grotto Good) and Mairin McKinlay (Gretta Good) are hilarious and over-the-top but in the best possible way. (I particularly loved the subtle homage by Mrs. Good to The Hunger Games.) 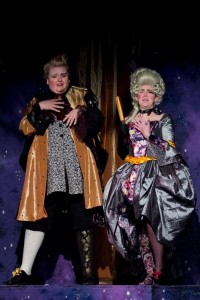 They become obsessed by a young girl named Iris (wonderfully played by Peyton Stehle) and decide to nab her for their own “perfect” daughter. Iris is the daughter of single mother, Mom (played with sensitivity and vulnerability by Stephanie Layne). The Great Goods, as they are known in Nocturno, hatch a plan where they send their minion Mister Matternot (played with great stage presence by Drew Brathwaite) to abduct her. But first, he must steal her memories and identity. In Nocturno, people’s memories are kept in their patchwork coats. Mister Matternot takes her jacket away, leaving one sole button as the last link to her identity (and a still life tableau of her table and chairs in her kitchen at home); and then whisks her away to The Goods’ Great island. But truth, like cream, rises to the top and, without giving anything away, the Goods are in for a number of surprises as they find out that nothing in life is “perfect” and you have to be careful what you wish for.

What are we without our memories? Is our soul, our nature, inextricably tied with our memories and past? Still Life tries to answer these questions and others. While the play is ultimately a parable for children, it has many allegorical elements that are pertinent to adults. One just has to look behind the curtain – or in Nocturno’s case – the moon to find them. 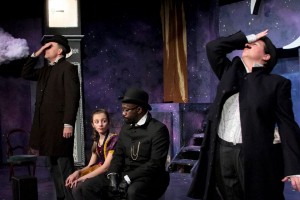 Tony Palmieri creates a neat fantasy world with colorful characters and imaginative props. (I would have loved to seen his take on The Rocky Horror Picture Show – one of his past credits). Props to Stephanie DeMarco for producing. Hole In The Wall’s Still Life With Iris should be seen and enjoyed by all ages.