Someday Productions LLC and Pillow Talking are pleased to present the following review of SPEED-THE-PLOW at The Brookfield Theatre for the Arts, Inc. 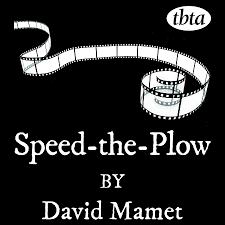 It’s impossibly hard to believe superstar Jack Nicholson ever had to claw his way anywhere unless it was something a character did in a film role; but most of us can’t say we’ve been that fortunate. In fact, my husband/co-reviewer’s oft-used expression, “It’s like trying to catch lightning in a bottle,” is how he refers to our own myriad creative works and the toil and troubles of trying to get them out there for our grand entrée into the highly competitive entertainment business. Yet irrespective of talent or a great product, what it comes down to is that it is all far more about timing, luck, perhaps a bit (or more) of backstabbing, and ultimately who you know. Playwright David Mamet captured this essence in his 1988 blistering Speed-the-Plow, a verbose three-character play told in three acts which transports us behind the Hollywood scenes and into the cutthroat world of filmmaking and hitting the big time. 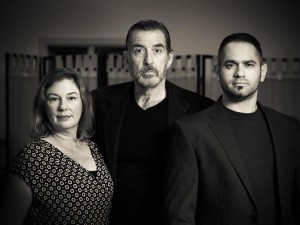 The Brookfield Theatre for the Arts capably took to the task of delivering this cynical tale of power, sex, and greed. Bobby Gould (a terrific Peter Lerman) is promoted as head of production at a major film studio where he’s got the muscle to greenlight films with smaller budgets as well as bring others with bigger budgets directly to the big boss, Richard Ross – all those films destined to make the company and him a lot of money.  When pal and colleague Charlie Fox (a delightfully conniving and ass-kissing Aaron Kaplan) bursts into the office to posit a “sure-thing” – a very vanilla prison buddy film which happens to have a hot property named Doug Brown attached – the two make plans to meet with Ross and revel in the glory of the green. All’d have ended well if it weren’t for the rescheduled meeting and a locker-room style bet for Bobby’s seduction of office temp, Karen (temptress Dianna Waller). But in the end, it’s Karen who gets between the pals when she becomes the seducer instead of the seducee – the guys never saw it coming.

Before long she’s successfully pushed aside the Brown film for her own attachment to a film based on an intellectual novel about a radiation apocalypse that Gould had given her to read. The film may not make anyone much money, but Karen’s got some powerful wiles that Charlie doesn’t – and it’s not the head on top of Gould’s shoulders that’s doing the thinking. You see it really is about clawing your way to the top and hustling is the name of the game. A hustler in any business will do anything for money – and that’s what ultimately drives all of the characters in Speed-the-Plow.

John Schwanke did an excellent job guiding this tight cast through the wordy, quick-fire banter. A simple set designed by Schwanke (who also was responsible for sound design) allowed the Hollywood power-play to be at the forefront. Shout-outs to producer Rebecca Pokorski for costume design and stage management, Beth Patrick for lighting design, producer Lou Okell for light and sound execution and set construction, and the rest of the crew for their contributions.

Like many shows we’ve seen of late, New Milford’s TheatreWorks’ [title of show] and Seminar to name a few, and as reviewers who also have our feet dipped in the pool of the entertainment business, we enjoy seeing the other side of things, for the better and for the worse. Kudos to TBTA for an excellent execution and for the skewering insight into the ruthless world of Hollywood filmmaking.

David Mamet’s Speed-the-Plow is a tough play for me to write about. I remember seeing it when it opened on Broadway 1988 with Joe Mategna (Bobby Gould), Ron Silver (Charlie Fox), and a young Madonna just starting to flex her acting muscles as Karen. At the time, I was more impressed with seeing the star power on stage than with the themes of the play or the play itself. Back then I thought it was wordy, predictable, and rather superficial especially considering the play was written by David Mamet who even back then was at the top of his game.

But that was almost thirty years ago when I was a young culture vulture and had neither the wisdom nor the theatrical critical eye that has been honed by both the evolution of the theatre and life experiences over the intervening three decades.

So it was with a pair of fresh of eyes and ears that I came upon The Brookfield Theatre for the Arts’ production of Speed-the-Plow. And you know what? It’s amazing how much a show like Speed-the-Plow has changed over twenty-eight years. But then, it is not the play that has changed, but rather me, myself, and I who have changed. The words and actions of the play are still relatively the same, but it is me who has deeper perception of the thematic nuances and the interplay of both dialogue and character.

The plot is as old as Hollywood itself. Bobby Gould is promoted to studio head with the power to green light a film at his discretion up to ten million dollars. His old friend, colleague, and competitor at times brings him the opportunity to do a film featuring the flavor-of-the-month, Doug Brown. What follows is a mutual admiration society each thanking the other for this wonderful opportunity. It doesn’t matter what the film is about – just that Doug Brown will star in it. During their sycophantic drooling, it is revealed that Bobby Gould has an attractive temp, Karen, who becomes the subject of a sidebar bet between the two men as to whether or not Gould can bed her. Gould wins the bet but at the cost of shelving the Doug Brown film and doing a film adaptation of an apocalyptic radiation book that Gould had offer to read as a “courtesy” to the author. Without giving spoilers away, what follows is the peeling away of the Shrek’s proverbial onion, revealing the underside of deceit and manipulation or, as Bic Daddy said in Cat on a Hot Tin Roof, mendacity.

When Speed-the-Plow first opened on Broadway, Jack Kroll of Newsweek described it “another tone poem by our nation’s foremost master of the language of moral epilepsy.” Now I finally understand what he meant. Indeed Speed-the-Plow is not a play in the true sense of the word, but a morality lyrical poem of the vicissitudes of our human condition. David Mamet always had an ear for common conversation and nowhere is this more evident than in Speed-the-Plow. As a fan of the cable show Entourage, I always marveled at how real the dialogue was between the male leads, how natural and commonplace; and I’d always wondered how much of it was adlibbed by the actors. I was surprised to discover that the show was very tightly scripted and directed. The same holds true for Speed-the-Plow.

There are only three characters in the cast. Accordingly, the success of the play is in direct correlation with actors’ ability to make Mamet’s words their own. Fortunately, Brookfield’s production is perfectly cast. Peter Lerman as Bobby Gould and Aaron Kaplan as Charlie Fox have Mamet’s staccato dialogue down pat. Both are skilled at verbal fencing and make easy banter of the rapid fire repartee. Dianna Waller as Karen is spot-on as the perfect distraction for the sidebar bet, bringing just the right amount of naivete, subtle ambition, and manipulative sensuality to the role. Veteran actor and director John Schwanke captured the essence and themes of Mamet’s play (which he later expounded upon in Wag the Dog); Hollywood is a surreal world of spin doctors and facades; creativity is a non-sequitur for those at the top of ladder; and you better be nice to the people on the way up the ladder because you are going to meet the same ones going down the ladder. And as I always say, that’s why they call it show business and not show art.

And, after twenty-eight years I finally found out what the title means. According to Mamet, he remembered the saying that you see on a lot of old plates and mugs: “Industry produces wealth, God speed the plow.” Speed-the-Plow was about work and about the end of the world, so the title was perfect because not only did it mean work, it meant having to plow under and start over again. It’s nice to know that an old dog like me can still learn new things.