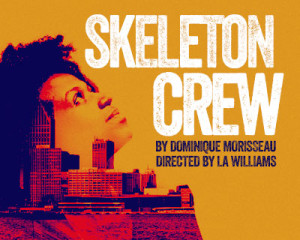 Every so often one sees a piece of theatre that is so real, vibrant and so elegantly simple that it haunts you long after the show has closed. Such is the case with Dominique Morisseau’s Skeleton Crew. Do not get me wrong. Skeleton Crew is not your typical slice-of-life Tree of Wooden Clogs that takes reality to extreme-level art. Indeed, it is a deeply-nuanced, layered play that more than likely can be over analyzed – in a good way. 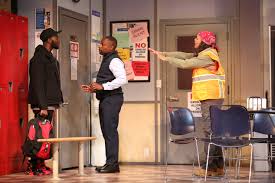 The play takes place in the kitchen/employee designated area where four workers can let down (literally) their protective work gear and be themselves. There is the veteran of 29 years (one year away from full retirement and full vestment); a pregnant single mother struggling to make ends meet; a young manager who came up through the ranks and, because of it, is internally conflicted with what he should do from a management perspective versus a worker’s perspective; and, finally, a young worker who realizes that the factory is just a temporary stopping place for him as he works on his illusions (or maybe delusions) of his own business and a grander life.

The play is about the dynamic of human relationships under stressful conditions – in the case the factory being shut down and people being laid off. The play could easily have taken place in a fox hole where we see the character traits emerge and you can bet by the end of the play which one character is the one to sacrifice him or herself by falling on the live grenade. In many ways, it makes you wonder that if you had to be a fox hole with others, who you’d want be there with you.

Not to get too intellectual, but the harbinger of the closing of the factory, goes to a person’s physiological and psychological need. As the psychologist Abraham Maslow (the veritable profit of the self-actualization theory which has been propounded by countless others like Anthony Robbins) ranks food, shelter, water, security and safety on the first two levels of his pyramid. Only if these basic needs are met can people progress to higher levels like esteem needs and love.

We see the metaphorical human framework even in the title: Skeleton Crew. The human skeleton is the core structure that holds everything together. And the four characters are the skeletal framework through which the human emotions are fleshed out.

The acting is impeccable, and kudos must go to the entire cast which works as a seamless ensemble: Leland Fowler (Dez); Perri Gaffney (Faye); Toni Martin (Shanita) and last, but not least, Sean Nelson (Reggie). Just as this talented cast provides the human framework for the play, the insightful direction by LA Williams provides the depth of the characters’ emotions and spiritual framework.

Skeleton Crew is one of those rare gems that, to a large extent, holds a mirror to the audience and allows us to see both the good and the bad.

Dominique Morrisseau’s powerfully affecting and altogether gritty Skeleton Crew at Westport Country Playhouse is one of those works where you feel less like a theatre-goer and more of a voyeur. The third in her Detroit Projects cycle, it seeks to illuminate the realities of working-class life in Detroit, Michigan around 2008, at the start of the Great Recession. In many ways, the audience has a sense that they’re watching private conversations and interactions among employees on an auto plant breakroom camera; unfiltered, raw, and at times heartbreaking.

Pregnant and soon-to-be single mom Shanita, streetwise, swaggering Dez (who’s harboring a secret), and feisty but weary union leader Faye are hearing rumors that the plant is closing, and each must grapple with that reality and what it means for their financial futures. Reggie, the plant supervisor who could just as easily have been on either side of the blue or white-collar line, faces his own struggles: he’s personally tied to Faye and while he’s concerned for the futures of his workers, he also has his own interests to focus on.

I’ll segue for a moment – to a real-life nugget that seems to apply here. My husband/co-reviewer, a bit old-school and well, lazy at times (sorry dear!), hates self-check outs. He also doesn’t believe in returning shopping carts to the store, rather, leaving them off to the side in parking lots. His rationale he’s wont to rattle on about? We are taking jobs away from people. In the former instance, technology is replacing humans. In the latter, the person whose duty it is to collect the carts will get fewer hours. I can’t say that I completely disagree, however, in that same first instance, I utilize self-check outs for my personal need for speed and to get on with other life duties; and in the second, I see it as my responsibility to leave a place as I found it.

Morisseau and my husband have a similar mindset – when technology and other advances whittle away opportunities, when corporations don’t see the value in hard work, when livelihoods are jeopardized, how will people make ends meet? We all know the rich keep getting richer, but it’s often at the expense of the poor who just keep getting poorer. Humans and humanity are replaceable and disposable. Morisseau’s Skeleton Crew brings this and more to light, this microcosm of real life, all in the space of a auto plant breakroom. 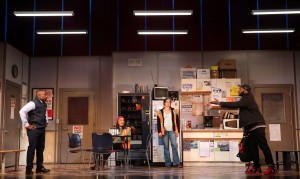 Caite Hevner’s scenic design rings as true as it possibly can, and in many ways rises to the same level of substance as the cast of colorful characters themselves.  Masterfully directed by LA Williams, Skeleton Crew draws you into the hearts and souls of each of Morrisseau’s well-crafted, uniquely different personalities: Dez (Leland Fowler), Faye (Perri Gaffney), Shanita (Toni Martin), and Reggie (Sean Nelson). The ensemble cast is like the well-oiled machine of the plant itself. Asa Benally’s costume design is spot-on, creating the authenticity required in this kind of work.

As always, we’ve come to expect no less than brilliant pieces from Westport. Whether it is new or classic work; straight plays or musicals, you leave the theatre with your mind abuzz. Great theatre is supposed to do that – and Westport continually delivers.