New York City’s La MaMa is synonymous with daring, bold, provocative theater, so it comes as no surprise that resident artist Theodora Skipitares, an award-winning multi-media artist and theater director, decided to put her own twist on a classic. Skipitares, who has extensive experience with puppet work, created, designed, and directed La MaMa’s recent production, Six Characters (a family album) in an engaging, yet truly unconventional way. 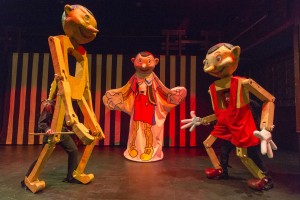 I recently have developed a new appreciation for the use of puppetry in theater. Even the definition of puppetry has changed for me – consider not just your typical sock or hand puppet or marionette, but instead the animation of any inanimate object for manipulation by a puppeteer; those which are small, those which loom large, and everything in between. They may be made of wood, cloth, or countless other materials, may be manipulated to cast shadows against light, or used with accompanying video projection. And what about the puppeteer? This isn’t your childhood puppet theater where he or she is hidden away beneath and behind a box and a curtain. Why now, an actor may appear alongside or even inside said puppet, guiding its movements, providing its voice, and even accentuating the character’s dialogue with his or her own facial expressions.

It was this unique artistic approach which Skipitares brought to Luigi Pirandello’s Six Characters in Search of an Author which she made her own with Six Characters (a family album), while keeping with Pirandello’s original theme of a half-dozen souls in search of their own personal stories. Pirandello, who won the 1934 Nobel Prize in Literature, was well known for “his almost magical power to turn psychological analysis into good theatre.” Skipitares did the same.

But that wasn’t the only thing about the production which was exceptional. The audience begins seated in an intimate area of La MaMa’s Ellen Stewart Theatre, where we meet a very unique Margaret Mead in a motorized scooter (voiced by Academy Award-winner and Theater Hall of Famer Estelle Parsons, and escorted by Brandon Fisette who was concealed in black). Mead sets the play’s stage and serves as our anthropological guide with fourth wall-breaking narration about the differing frameworks of families.

The performance commences with three ginormous Pinocchio puppets who are at odds with one another, illustrating the often dysfunctional operations and sometimes competitive nature of family. Next, on an elevated area, appear Oedipus and his mother, Jocasta – a more extreme representation of family pathology. Enter again Ms. Mead, who leads us to another area of the theater. 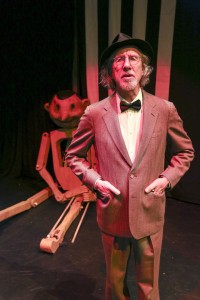 In the new space we see Pirandello (played by Tom Walker who also was Musician and Narrator) and his six characters – six bobbing and glowing heads who are striving to be heard and to have their tales illuminated. As family remains the common thread among each story, we also witness excerpts from Bleak Houses, Bad Seed, An American Family, and fictionalized reports of the dire water situation in Flint, Michigan. Throughout the production, we learn about incest, unhealthy relationships, home foreclosure, water toxicity, and coming out. Among the puppetry are live actors, live music, video, and narration. Skipitares uses nearly every conceivable device to weave her distinctive yarn. 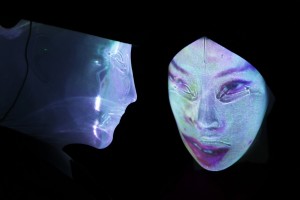 With family, you never know what you’re going to get. With experimental theater, you also never know what you can expect. By definition, this type of theater “alters traditional conventions of space, movement, mood, tension, language, symbolism, and other elements.” Skipitares successfully employs all of these components – if you are looking for something completely different, Six Characters (a family album) is an entertaining hour and an eye-opening exploration of family dynamics.

“When a character is born, he acquires at once such an independence, even of his own author, that he can be imagined by everybody even in many other situations where the author never dreamed of placing him; and so he acquires for himself a meaning which the author never thought of giving him.”
― Luigi Pirandello, Six Characters in Search of an Author

When I heard that Pirandello’s Six Characters was going to be performed at the Ellen Stewart Theatre at La MaMa, my culture-vulture thermostat went out of control. I had minored in Italian and had read Pirandello’s works like Cosi E Se Vi Par (Right You are if You think So) in its native language. I bragged to my wife about the parallels I drew between Pirandello and Shakespeare in a college thesis. I had not seen Six Characters in Search of an Author since college. I knew that I would be in for a surprise. 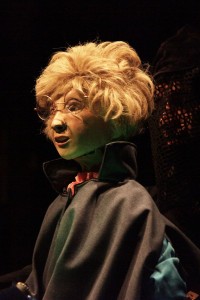 And boy, what a surprise it was! A Margaret Mead puppet appears and introduces herself as our guide and host for the evening. Anthropology? Puppets? What happened to Pirandello? Wait, it gets even more eclectic.

We were confronted by three GIGANTIC Pinocchio-like puppets who argued back and forth about being a real boy. Puppet may not be the right word. These puppets were HUGE contraptions. The puppeteers arduously worked them from behind. I was reminded of Sigourney Weaver in Aliens working that forklift! And then the audience is asked to move to a larger section of the theatre!

We are finally introduced to the six characters from Pirandello’s work who appear in the form of puppets with luminous faces and tripods for bodies. And then we meet Pirandello (played by Tom Walker – the only non-puppeted actor) who pontificates about the dilemma of creating fictional characters that WANT to exist. 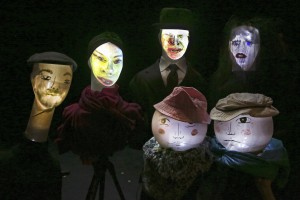 Fortunately, I read the notes of the Director, Theodora Skipitares, in the program. (It’s always a good idea to read the Director’s notes—they can prove quite handy for looking intelligent at after-show cocktail parties.) I learned that Six Characters was not based on Pirandello’s work, but more in the nature of a response to it. But other original sources included Bleak Houses by Paul Reyes; The Adventures of Pinocchio by Carlo Collodi: Oedipus by Seneca (Ted Hughes translation); Bad Seed by John Lee Mahin; Six Characters in Search of an Author by Luigi Pirandello; and An American Family, PBS Documentary. Yes, there is quite an interesting scene from the granddaddy of all reality shows, the documentary on the Loud family. 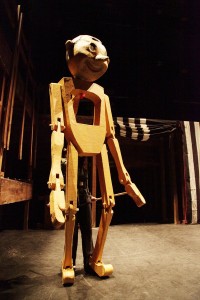 I doff my acting hat to the an incredibly talented casts of actors and puppeteers including Thomas Walker, Jan Leslie Harding, Chris Ignacio, Jane Catherine Shaw, Britt Moseley, Maiko Kikuchi, Atticus Stevenson, Brandon Fisette, Noah Le Gros and Estelle Parsons as the voice of Margaret Mead. Let me repeat the last shout out: the great Academy Award-winning actress Estelle Parsons was the voice of Margaret Mead. A special hat doffing to Jordan Morton, co-composer and bassist – who would have thought a bass can sound like that?

Award-winning, multi-hyphenate Theodora Skipitares crafted and directed a brilliant blend of live theatre, puppetry, and multi-media to explore reality vs. illusion and the dynamics of the family unit. If you are a character in search of engaging, thought-provoking, stimulating theatre, Six Characters (a family album) is up your alley.