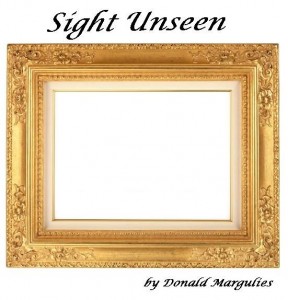 Despite the fact that most of us prefer to do research before making major purchases, and at some point also see things with our own eyes, there are some instances where we may find ourselves quite literally in the dark. And while seeing a play is not akin to a major investment, it was amusing that that I found myself knowing little about the Town Players of Newtown’s production of Sight Unseen by Donald Margulies.

There are reasons most of us don’t like going headlong into situations where we are totally clueless, because frankly doing anything “sight unseen” is a risk – an uncertain outcome that may yield either a pleasant surprise or be deemed a bleak mistake. But for Sight Unseen, it was the former for me – it is a thought-provoking tale about a “visionary” painter who’s lost his way and he’s questioning (or being questioned about) what it means to really make it or be a sell-out.

A housepainter-turned-painting superstar has ridden the fast track to artistic success and now fine art aficionados are clamoring for his next great work. Brooklyn Jew Jonathan Waxman, whose reputation precedes him, has clients already reserving wall space in their homes and peeling back tens of thousands of dollars despite the fact that he hasn’t yet put paint to the brush for these commissioned works. But his mojo has gone missing – that youthful verve and inspiration have been muted and if he wants to continue to reap huge payouts, he’s got to get it back. 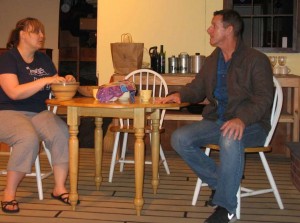 So Jonathan detours from his big European art retrospective to a remote village outside of London and pays a visit to an old flame; the once spirited dilettante, Patricia, who became his muse and girlfriend after sitting for him back at his college art studio. With a two-year relationship that was fraught with issues (including their differing religious beliefs) they never had proper closure and now with vastly different lives and marriages, Jonathan and Patricia must navigate the choppy waters of a strained reunion and resurfacing feelings. This of course, is much to the dismay of Patricia’s husband, Nick.

Sight Unseen doesn’t follow a linear progression, but instead goes from present to past and back again (and again). We are taken not only through the chilly climate of their current state of affairs (and the chilly home where Patricia and Nick reside) but also given a glimpse into both the couple’s beginning and then the end of their romantic relationship, 15 and 17 years earlier, respectively. Additionally, we learn more about who Jonathan has become as his career soared into the stratosphere when he sits down with German art critic Grete, whose not-so-subtle anti-Semitism rears an ugly head.

Under the expert direction of Sherry Asch, the Town Players were phenomenal in bringing this stimulating story to life. Christopher Cooney (whom we saw in The Bijou Theatre’s One Flew Over the Cuckoo’s Nest) was a terrific Jonathan, the tightly-wound, conflicted, angst-fraught artist caught between his love for his craft and his passion for fame and money. He’s a man who has little in the way of self-identity and who is struggling with a lack of fulfillment that becomes evident in his work. Patricia, played by Stefanie Woerdeman is delightful as the wounded ex-girlfriend who has never gotten over her first real love and who appears to be punishing herself being in a loveless marriage and living an unfulfilled life. She delivers a splendidly layered performance which is alternately passionate, exasperated, cold, angry, and a plethora of other emotions.

Philip Cook (whom we saw in Manhattan Repertory Theatre’s Sunnyside) as Nick, is the tortured older husband whose seemingly unruffled demeanor from time to time gives way to agitation and distress when pushed beyond his tipping point. And Karen Pope is a perfectly exasperating Grete, the probing critic whose tact has been checked at the door.

The Town Players have done another wonderful job with a skillful use of their space – kudos to set designer Timothy Huebenthal, with construction by Huebenthal and Nick Kaye (who also produced), painting by Linda Dohanos, and decoration and properties by Barbara Disraeli. Shout-outs also to Kaye for sound and lighting design and Roberto Perez for their execution.

This penetrating look at the art world explores how talent, motivation, commercialism, and the quest for fame ultimately may affect one’s final product, things which can plague individuals in most all creative fields. It digs deep into relationships, both romantic and family of origin. Margulies employs sharp, humorous, often biting exchanges between characters. My only criticism is that there are times, however, when dialogue seems a bit forced and somewhat unnecessary to the main themes of the story. Additionally, there are a few flash forwards/flashbacks that become confusing as to their timing. Overall, it is a thought-provoking work and The Town Players deliver a top-notch production!

Sight Unseen is one of those small layered plays, like Lanford Wilson’s Fifth of July, where there may not seem like a lot is happening on the surface, but still waters run deep and by the end of the play all of the skeletons are unearthed and all the secrets divulged. The play, written by Donald Margulies, has a nice pedigree, having been produced Off-Broadway in the 1990s and on Broadway in 2004 and was a finalist for a Pulitzer.

Jonathan Waxman is a critically acclaimed and wealthy artist. His works are in such demand that they are often sold “sight unseen.” Fresh from the loss of his father the week before, Waxman travels to London for a retrospective show of his work. Despite the fact that he is married and about to become a father, he takes a side trip to see a former love, Patricia, who now is living with her archeologist husband outside of London. During the visit with his ex-lover, he sees an early painting he did as a student hanging on her wall. The painting intrigues him and renews, to an extent, his flagging inspiration. We also see Waxman being interviewed by Grete, a young German journalist who probes his Jewish background and upbringing. 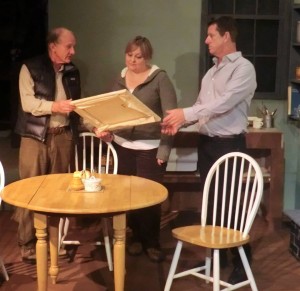 Kudos to producer Nick Kaye, director Sherry Asch and the Town Players of Newtown for bringing this rather different, thought-provoking play to the community. It is a well-staged, well-directed, well-acted piece of theatre. Christopher Cooney as Jonathan Waxman played the perfect, unflappable, disaffected artist who has lost his mojo. We last saw Mr. Cooney as the psychiatric patient Scanlon in One Flew Over the Cuckoo’s Nest. It was nice to see Mr. Cooney’s extensive acting range in playing this completely different character. Laura Linney played both Patricia and Grete to critical acclaim in past productions including on Broadway. While I did not see Ms. Linney and thus have no basis for comparison, I will say that Stefanie Woerdeman was spot-on as Patty. She brought an empathy and lovelorn angst that was palpable. We also had seen the kind of effortless acting Phillip Cook brought to a role in a one-act play titled Sunnyside at Manhattan Repertory Theatre. His easy-going, tinged with an acerbic and sharp-witted dialogue underscored the almost cuckolded character of Nick. Finally, although the part of Grete, the interviewer, was not large, it was key one and Karen Pope did an excellent job with it.

The play is non-linear in structure, offering a mix of past and present scenes. Overall, it works as a neat conceit in giving the audience a bird’s eye view of the key life events of its characters and how they are linked together. The audience functions like detectives, piecing the relevant links together into a cogent whole. Ms. Asch did a great job assembling the seemingly disparate scenes which in the end, fit perfectly like a complex jigsaw puzzle,

My only issue, and it is not with the Town Player’s production, but rather with the structure of the play itself, was that I would have liked to have seen a deeper nexus between Waxman’s Jewish background and the exact way it impacted upon his art and life. While these themes were discussed in the play during various scenes and exposition neatly provided via the Grete interviews, I felt the play didn’t go far enough in shedding light upon this motif.

Daniel Margulies once said that Sight Unseen, like his other works, deals with loss and identity – two themes we can all relate to at some point in our lives. The play also is a fascinating commentary on the vagaries of fame and fortune as well as the nature of art. Overall, the Town Players of Newtown’s production of Sight Unseen is an engaging piece of theatre that will stimulate your thought processes long after the curtain has comes down – what more can we ask of good theatre?