Someday Productions, LLC and Pillow Talking blog are pleased to present the following review of Seminar at TheatreWorks New Milford 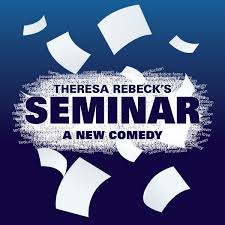 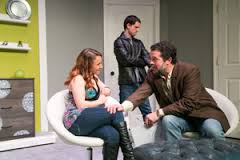 I’m a writer – sometimes I feel as if there are words instead of blood coursing through my veins; I hear ideas popping into creation like new synaptic connections in my brain when I’m driving, in the shower, or doing any other mundane activity. It’s something I do, and it’s something I love. So when I heard that Theresa Rebeck’s stage comedy Seminar, directed by Alicia Dempster, was at New Milford’s TheatreWorks, I was both excited and intrigued. According to Samuel French, the premise is: “…four aspiring young novelists sign up for private writing classes with Leonard, an international literary figure. Under his recklessly brilliant and unorthodox instruction, some thrive and others flounder, alliances are made and broken, sex is used as a weapon and hearts are unmoored. The wordplay is not the only thing that turns vicious as innocence collides with experience in this biting Broadway comedy.” It sounded just up my alley, and my writer hubby’s. 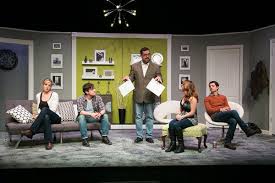 An easy to access, intimate venue, TheatreWorks outdid themselves with a very impressive set design and plenty of attention to detail (kudos to set designer Scott Wyshynski, set dresser Glenn R. Couture, and staff). It nearly rivaled the set of Playwrights Horizons’ The Qualms, albeit on a smaller scale. Enter a band of ostensibly colorful characters: the beautiful Izzy, the reserved Martin, defensive Kate, and name-dropping Douglas; and finally, the illustrious, obnoxious, anguine Leonard. From the opening dialogue, countless beer bottles were opened, green-eyed monsters abounded, tempers flared, and acerbity teemed in Anna’s lavish, Upper West Side apartment where the writing “seminar” was taking place.

At its core, Seminar sought to bring to light the challenges of being a writer and of being creative; but also, how people respond to having their work (and ultimately themselves) dissected, criticized, and judged. Some of us wither and some just have harder bark than others. But in the introductory psychology class I teach, one textbook defines creativity as: the ability to produce novel responses appropriate in context and valued by others. Who then gets to decide what is of value? Art in any form is grossly subjective, that’s for damn sure. You may want to consider that in going forward in the rest of my review. 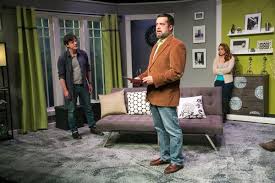 IMO, Seminar was a challenging undertaking for this troupe at TheatreWorks. A heavily dialogue-driven work, broken up by few physical elements and laden with scene changes, this wry piece required sharp delivery and a relatively fast pace. And it mostly worked due to the group of talented actors who graced the stage. But for me, this seems like the kind of piece that is stronger when read than when seen on the boards. But also as my husband and I know with numerous plays we’ve written, it is very important to workshop a script is before it gets to the stage – the premise for Seminar is great, it felt as if it just could use a bit of tweaking.

Sosbe’s Leonard, the haughty antagonist, piloted the play to its ultimate and convoluted climax (pun intended). He skillfully peeled back the layers of this crusty character with humor and sarcasm and guided the four aspiring writers through the droll, but at times flat and predictable story. Reesa Roccapriore’s Izzy was the ideal dose of sluttiness and duplicity, relying on her feminine wiles more than her questionable literary ability. Anya Caravella injected just enough whiny annoyingness into the blue-blooded, but talented Kate. Jim Dietter’s Douglas, who could rely on little more than a famous name, was perfectly punchy-faced (read: I wanted to punch him in the face – stole that from one of my very favorite actresses with whom I’ve worked – thanks, Emma!) Finally, Chris Luongo’s Martin was solidly cerebral while at the same time, convincingly self-doubting. One might imagine his character to have a trashcan full of chewed pencils, would it be that we still used the orange wooden relics to compose our works in today’s age of technology. And he may have been the only real likeable character in the play.

Dempster skillfully directed Seminar which, despite the scripts flaws, had plenty of entertaining moments and 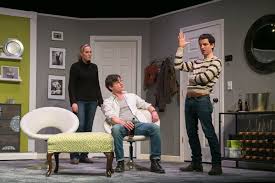 seriously made you consider whether going into such a thorny field of work, which is so open to public opinion, is for everyone. The characters’ multiple costume changes struck me as amusing, as I imagined five individual trunks full of clothing and wondered how each actor remembered what they’d worn the “day before” – I have enough trouble remembering in my real life.

I appreciate all of the work that went into this production and am looking forward to seeing what else TheatreWorks has in store in their upcoming The Tale of the Allergist’s Wife.

Seminar is a tough play to review for a writer. There are things in it, that as a writer, one can relate to immediately and other things which a writer may quibble with – or downright deny. I almost feel like I should recuse myself from writing a review because of my personal biases – but let it suffice that I have disclosed them upfront.

The play is about four wannabe fiction writers who pay $5,000 each to a well-known teacher/fiction author to critique and guide their work. None of the four, however, are prepared for the brutal honesty and seemingly abusive behavior of their mentor. The situation is compounded by some of the seven deadlies including envy, lust, and deceit. 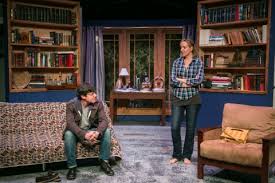 The four characters really are caricatures of different approaches that writers (or anyone in business) may take to succeed. There is Douglas, the not-without-talent writer, who has achieved some degree of success in the business but mainly as a result of a famous uncle rather than by his own efforts. Izzy is the unabashedly sexual flirt who uses her looks and physical assets to help her succeed. Kate is the hardworking networker who believes talent (and paying good money to a teacher) will help her succeed.  Finally, there is Martin, the bookish, nitpicking but talented flake who may be the next J.D. Salinger. All sycophants, they fawn over their teacher Leonard, the burnt-out shell of a once formidable writer. Do his brutally honest critiques help or hurt?

Here are my issues with the play: The playwright, Theresa Rebeck, is an award-winning writer with a CV that would make anyone in the Dramatists Guild salivate. She also is a film and television writer as well as a book author. (I’m envious – there, I admit it.)  She is a great writer – no question. But there are things in Seminar that just don’t ring true. While there are certain insider references that are planted as Easter Eggs such as Bennington College which is known for its creative writing MFA program or the prestige of getting published in The New Yorker magazine, there are other things which simply fall flat.  First, I could accept the premise more if it took place during early or pre-internet days. A teacher reading hard copies during the seminar? What about how someone can read only two pages of a 600-page manuscript and decide whether it’s worthy of a Pulitzer? I don’t buy it. Nor do I buy a teacher making house calls – he or she would have their own rented space. The emphasis on going to Bennington or getting an article in The New Yorker as the gateway to writer heaven also is misplaced. Today there are countless avenues to pursue. Indeed, everybody and their grandmother has a vlog, blog, website, YouTube channel, etc. (Pillow Talking blog is an exception of course!) I don’t believe that in today’s marketplace, five struggling writers would pay a burn out $5,000 to teach them to write! They would be better off taking that money, self-publishing a Kindle novel, and putting the dough into advertising. Ben Brantley of The New York Times had similar criticisms with the structure of the play when it opened in 2011 on Broadway (great minds think alike!) Finally, none of the characters are likeable – which is okay as long as you like them enough to hate them – which also doesn’t happen here. We all loved watching Simon Cowell give his brutally honest critiques of young singers on American Idol. 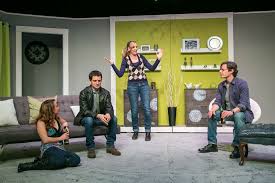 My nitpicking is with the play and not the production. I think Alicia Dempster did an admirable job directing. Kevin Sosbe had both physical and stage presence as Leonard. I clearly could see him channeling Orson Welles (from a prior role). Chris Luongo as Martin made the perfect, bookish, annoying geek (the one that sat behind you in sixth grade and made you want to slap him silly for arguing over the limitations of iambic pentameter in the Ancient Mariner). Jim Dieter is spot on as the not-without-talent Douglas who relies on nepotism and formulaic mediocrity rather than creativity. Did someone say Salieri from Amadeus? Reesa Roccapriore played the vamp Izzy to the hilt (of her high heels). And, last but not least, Anya Caravella captured the essence of the networking and studious Kate whose naïve expectations of the business gradually disintegrate before our eyes.

Even though I do not agree with the structure of the play, it is worth seeing for the acting and comedic value. And TheatreWorks should be commended for offering a different play than the ones usually seen on the community theatre circuit.  Sorry, Theresa Rebeck, but this is what happens when you open your work up to criticism. As the director Alicia Dempster states in her notes to the production, “Artists, regardless of their discipline, take huge risks when they share their art.”