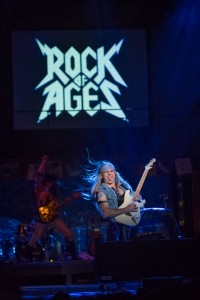 I am one of those people who will read the book or see a play first and then see the film version. As a filmmaker, I like to see how the screenwriter adapts the original material for the cinema. I also understand that as a filmmaker, sometimes things have to be changed.

In what I would say was a rare instance, I happened to see the film version of Rock of Ages (twice in fact) when it first hit theaters and enjoyed it immensely. I was excited when I heard that the Warner Theatre had undertaken the herculean task of doing the show. My concern, however, was how the play would stand up to the film version. Could any actor be as good as the veterans in the film including Paul Giamatti, Alec Baldwin, Russell Brand, and, of all people, Tom Cruise as Stacee Jaxx?

The trick, of course, is to evaluate each version independently of the other (something I did when reviewing the play version of One Flew Over The Cuckoo’s Nest). I am happy to say that Warner Theatre did a great job of bringing this complex, multi-layered play to community theatre (and is indeed the first community theatre to produce the musical in New England). 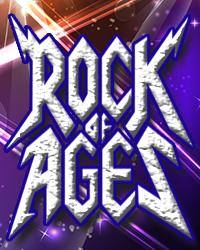 The play takes place at the tail end of the 80s when hair bands were morphing into boy bands and rock music was winding down into what is known today as classic rock. The premiere music showcase in the area is The Bourbon Room (where the famous rocker Stacee Jaxx got his start). The owner, Dennis Dupree and his loyal minion, Lonny Barnett, struggle to keep the club afloat during this transitional period in the music industry. Enter a German developer Hertz Klinemann and his son Franz who convince the Mayor to the abandon sex, drugs, and rock-and-roll lifestyle and tear down The Bourbon in favor of condos. Throw into the mix an outraged city planner, Regina Koontz (pronounced Reg-eye-na) a pair of star-crossed lovers, Drew Boley (young rocker wannabe) and Sherrie Christian (innocent ingénue from the Midwest looking to make it big), a strip club owner, Justice Charlier, a few strippers, the music of Styx, Journey, Bon Jovi, Pat Benatar, Twisted Sister, Steve Perry, Poison, Europe and others – and you have one helluva play! 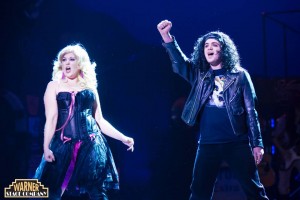 Having produced theatre and knowing what goes into it, we at Pillow Talking like to give individual props to everyone who worked on the show. My bad, but this cast and crew is far too large to mention everyone individually (my apologies) so suffice it to say that the entire group did an excellent job. The main pairs of actors/characters are all perfectly matched: Noel Roberge (Drew Boley) and Katie Brunetto (Sherrie Christian) as the star crossed lovers; Dick Terhune (Hertz Klinemann) and Anthony Amorando (Franz Klinemann) as the odd-matched father and son; Kevin Sturmer (Dennis Dupree) and Michael King (Lonny Barnett) owner and assistant and closet lovers. Tony Leone was perfectly cast as the narcissistic Stacee Jaxx. AlexaRae Campagna showed both her acting and singing chops as Regina Koontz. Erin West Reed as Justice Charlier the owner of the Venus Club, had just the right mix of hard, outer bark and a soft, vulnerable inside. 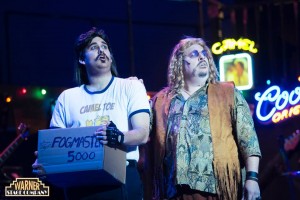 A special shout out must be given to Michael King as the host/narrator/”dream conjuror.” His breaking the fourth wall at times and interacting with the audience (something also which was in the Broadway show) was laugh-out-loud hysterical. He worked the crowd like a pro and stole many a scene.

Overall, the play was entertaining and engaging. The singing and choreography were excellent. The music was awesome. This all was due in large part to the finely tuned direction and choreography by Sharon A. Wilcox. She fearlessly gripped this tiger-by-the-tail play and tamed it into shape. 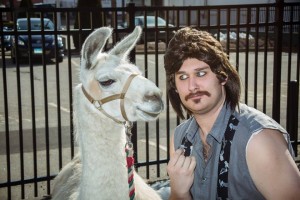 Warner Theatre, the producers, director, cast and crew all should be commended on bringing this great show to the community.

And special kudos go to the Llama!

It has been long debated – is the book better than the movie? Does it better capture what is in the character’s mind? Or is the movie better at visually depicting the nuances that words alone may not capture? Or is live theater better than both? Not having seen Rock of Ages on stage before, but having LOVED the film, I’m finding myself on the fence. There are elements of each which I enjoyed and to which I feel partial. 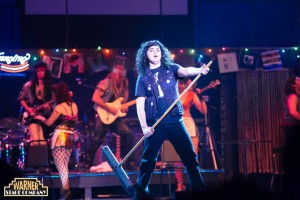 Rock of Ages, directed and choreographed by Sharon A. Wilcox with music direction by Dan Ringuette, played at the Warner Theatre in Torrington, CT to a raucous crowd. Whether or not you teased your hair up to kingdom come back in the 80s (I did!) you’ll find yourself singing along to the multitude of “really sweet” 80s bands’ ditties and longing for the resurgence of Madonna-esque clothing styles (or maybe not!) It is a feast for the eyes and ears with its colorful, albeit sometimes caricature-esque characters, silly gimmicks, and let-it-all-hang-out kind of feeling. 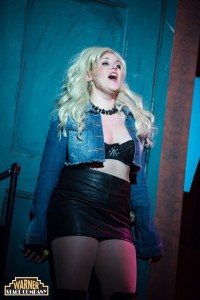 Rock of Ages tells the story of a motley crew of characters in some pretty over-the-top wigs and grunge-wear, I might add, who meet in and around The Bourbon Room. Naïve Sherrie Christian (adeptly played by songstress Katie Brunetto) isn’t in Kansas anymore – as soon as she hits L.A. she’s mugged. Jobless and unsure of herself, she runs into the immediately smitten Drew Boley (the talented Noel Roberge) who convinces his boss, Dennis Dupree (the very comical Kevin Sturmer), to hire her as a waitress. But the Sunset Strip is in for a hefty overhaul if the German father-and-son team of developers have their way – Hertz and Franz Klinemann (played by Dick Terhune and Anthony Amorando, respectively) provide a number of humorous roadblocks to the continued survival of The Bourbon Room, quite possibly building something as basic as a Foot Locker in its place. City developer Regina Koontz (feisty AlexaRae Campagna) with her team of dancers/waitresses also pull off some mighty uproarious antics to ensure this doesn’t happen.

A lightbulb goes off over Dennis’ head – he can breathe life into the club with the banging return of Stacee Jaxx (Tony Leone shines, especially in his skimpy gold lame briefs) and his band Arsenal who long ago debuted at The Bourbon. With a surefire sold-out crowd, they can make a heap of money and fend off the malicious Klinemanns. After the opening band bows out, Drew fills in and ultimately benefits – getting more than his 15 minutes of fame, he is discovered by a record producer in the audience. But he doesn’t get the girl – after an earlier faux pas, she bolts and hooks up with Stacee. All hell pretty much breaks loose from there, including Sherrie’s foray into the strip-club life, mentored by Momma Justice Charlier (Erin West Reed has a fine set of pipes on her). 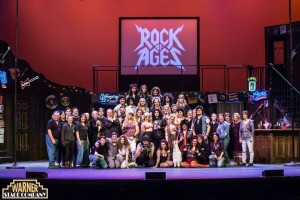 This was an immense production to pull off with a big cast of characters and a multitude of hair-band songs. Kudos to the entire troupe for the effort. The fictional band Aresnal, who remained onstage throughout (while keeping wild wigs on their heads), nailed each of the 80s band, iconic compositions which are thread through the play and by which the story is told – Steel Keyz (Dan Ringuette on keyboard), Waylin’ Stringz (Mark Garthwait on guitar), Rikki Riffz (Meric Martin on guitar as well), Daxx Slaughter (Dan Porri on bass), and Izzy Drummond (Nate Dobos on drums). The set also was fabulous – a monster crew of carpenters and artists created a vibrant and believable nightclub with moveable set pieces for various scenes.

As Lonny told us before the intermission – the second act would kick the first act’s ass – and it did. It came off stronger and by the end of the show, I was bouncing along with audience and grinning at the final result. King’s Lonny never missed a beat and made sure this production was as much a party as it was musical theatre and in the end, that’s what you’d hope for with the iconic Rock of Ages – it’s not touted as “The One Night Stand You Will Always Remember” for nothing!