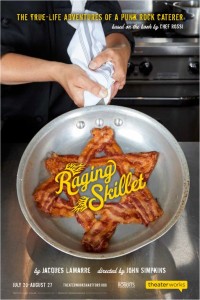 I have been a self-avowed foodie for a very long time. I loved cooking as a kid and enjoyed working as a server and bartender in the food service industry from the time I was 15 years old. Among my many haunts were the Dunkin’ Donuts counter, an Outback Steakhouse, a hotel restaurant or two, and a great little upscale café – and throughout these journeys I learned many tricks of the trade. Under the sidebar tutelage of some talented chefs as well as through my own trial-and-error attempts, I’ve become something of a gourmand, pleasing many a palate including family, friends, and even my own – but I can say this – I always prefer eating something someone else has prepared!

My mother also was a wonderful cook in her own right, setting the family table each evening. And growing up “half Jewish” I partook in every traditional holiday meal imaginable and still do – Passover and Rosh Hashanah Seders as well as Hanukkah latkes; Thanksgiving, Christmas, and Easter feasts; you name it, I ate it. So it can be said that my roots were well established – and then I moved on from there adding my own flourish to more gourmet meals with many kinds of ethnic inspirations.

So it was with this appreciation for food, family, and of course, the theatre that I was eager to devour the cookbook page-to-TheaterWorks’ stage piquant confection, Raging Skillet: The True-Life Adventures of a Punk Rock Caterer. Based upon the life and book by the uniquely vibrant and considerably trailblazing Chef Rossi, Raging Skillet is part cooking demo, part book-signing, part club night (replete with music and a disco ball), and ALL fun. I can’t or won’t even stop there because it also is a riotously wild ride, it’s anarchic, it’s radical, and…it’s quite tasty!

As it were, prolific Connecticut playwright Jacques Lamarre happened upon Rossi (one name is all that ball of fire needs!) at her first book signing of The Raging Skillet: The True Life Story of Chef Rossi; a Memoir with Recipes. Rossi is a “celebrity chef” with her own radio show and a catering company like no other. Immediately besotted, Lamarre doggedly pursued Rossi and her story as fodder for what was to become his fourth-wall-be-damned play about her roller coaster life as a lesbian, Jewish nonconformist who hates the microwave but loves everything from bacon to matzo balls to Snickers and potato chip “casserole.”

When you enter Hartford’s TheaterWorks, you get all that and more (except for the matzo balls – but I love my mom’s and can patiently wait for September’s Rosh Hashanah celebration). Rossi is the bomb and her story is a blast. But unless you’re fortunate enough to have had the opportunity to meet her (we did!) you’ll not be disappointed because you instead get an engaging, high-energy, spectacular Dana Smith-Croll who stands in as the one-and-only punk rock caterer. She brings you right into her kitchen (which hardly looks like a set!) then introduces you to her classically Jewish, microwave-loving, housedress-wearing, deceased mother, Harriet Ruby Ross played by Marilyn Sokol. Sidenote: I want to grow up to be Marilyn. And last but certainly not least in this gig is Rossi’s right-hand man, DJ/sous chef DJ Skillit (the immensely entertaining George Salazar). He not only pumps up the volume but also the temperature of the oven and the flames of the gas stovetop. The trio are masterfully led by veteran Off-Broadway and regional theatre director, John Simpkins. 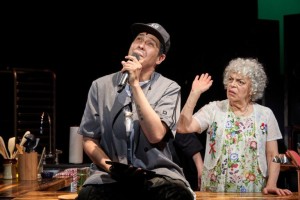 Now where else can you be engaged for a full 90-minutes and be fed such savory morsels as the oh-so-treif (translation: SO-not-Kosher) chocolate-covered bacon; the stoner’s delight – made of Snickers, butter, marshmallows, and potato chips; or the simply fabulous pizza bagel? Right at TheaterWorks. These mini cooking demos and mouth-watering samples punctuate the tales Rossi tells of her transformation from the kid who knew only from tasteless, microwave-prepared meals to running away from home to becoming a rock star chef – a highly sought-after caterer capable of preparing anatomically correct vagina morsels for a star-studded V-Day party coordinated by Sally Fisher, producer and friend to Vagina Monologues playwright, Eve Ensler.

Raging Skillet is raucous and irreverent. It’s Rossi’s bold truth and in that regard, filled with laughter and even tears. It’s filled with her love for family, food, and life. She’s passionate and plucky, daring and determined. And while I haven’t yet finished her book, I am certain Lamarre has nailed it in this spirited translation to the stage.

As always, TheaterWorks brings exceptional and distinctive works to the stage. One can always count on the unparalleled, creative choices by Rob Ruggiero, producing artistic director, for a grand and memorable time at the theatre. Thank you Rob! Make sure you catch this one – and raise your hand high when they come around with the snack trays – you’ll be so glad you did! (Who knew chips and candy could taste so good together!?)

Raging Skillet is nothing less than a raging, rollicking, romp that is brewed to perfection. The recipe is definitely unique: main entrée live action theatre with sides of a daytime talk show, audience interaction, book signing (featuring vagina shaped cookies – I kid you not), peppered throughout with the biography of the colorful life of Chef Rossi, punk rocker, feminist, rebel chef and caterer 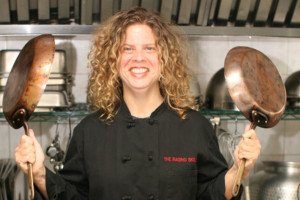 Rossi, a writer and author, hosts her own radio show on WOMR and WFMR in Cape Cod called “Bite This” now in its thirteenth season. She also has been featured on The Food Network and NPR. But wait – there’s more. She also is the owner and executive chef of The Raging Skillet, an offbeat (to say the least) catering company. While she may not be called to cater traditional mainstream events like weddings, she has been called by Zagat as “the wildest thing this side of the Mason Dixon line.” Having a goth party in a haunted mansion? She would be more than up for the task.

The play, written by Jacques Lamarre and directed by John Simpkins at Hartford’s TheaterWorks captures the essence of her offbeat but addictive personality and humor. The three-character play is set like a daytime Rachel Ray episode. Chef Rossi is played by doppelganger Dana Smith-Croll who adopts Rossi’s persona to perfection. George Salazar is spot-on as DJ Skillit, her side-kick, DJ, assistant and audience warmer-upper. Marilyn Sokol breathes new life into Rossi’s traditional Jewish mother who appears as a not-so-silent spirit who comments on everything from her daughter’s cooking to the present political milieu.

In the tradition of My Big Fat Greek Wedding and Tony n’ Tina’s Wedding, humor which is ethnic-centered but universal to all, is served like a full-course meal. Audience participation is not only encouraged but made an integral part of the show. Tasty appetizers which are made while you are watching the show are handed out like trick-or-treat candy to the audience at large. (Okay, I confess – I took two pizza bagels – but it was by accident!). Afterwards – or maybe it was still part of the show – the real Chef Rossi appeared to do a book signing, giving out a vagina-shaped cookie with every book. It was like Christmas Eve in the Amazon shipping department. 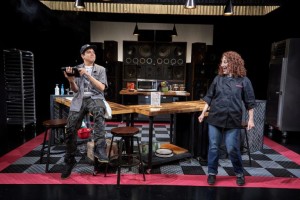 Back to the play. A talented cast, an experienced director and playwright and a unique vehicle for the stage – the perfect ingredients for a hit. The repartee is brisk and sharp, especially the one-liners between Rossi and the ghost of her dead mother. I should add that great set design by Michael Schweikardt and lighting design by John Lasiter served as added desserts to an already sumptuous feast.

Witty, nuanced, relatable, and totally engaging, do not diet until you see this show. Pillow Talking is also going to review Chef Rossi’s book, The Raging Skillet: The True Life Story Of Chef Rossi; A Memoir with Recipes and I can tell you now that the book has hooked me in the first few pages. Being a die-hard Elvis fan, I cannot wait for my wife, co-reviewer, and gourmet cook to try out two of Chef Rossi’s recipes she pointed out to me: “Eggs I’d Cook for Elvis” and “Kosher Elvis Sandwich”!

The play is the perfect personification of Chef Rossi’s motto: “Molds are a delicious thing to break!”