Someday Productions LLC and Pillow Talking are pleased to present the following review of PUMP BOYS AND DINETTES at Paper Mill Playhouse, NJ 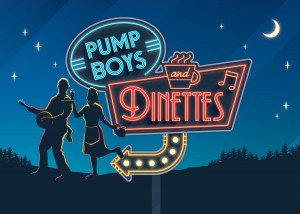 “To me, music is entertainment – what else can it be? In fact, it’s the only language I know of that’s universal.” – Ray Charles

If you add great casting, great acting, great comedic timing to the above quote you will have all of the ingredients of the Paper Mill Playhouse’s production of Pump Boys and Dinettes. In a word, it is pure ENJOYMENT!

The play directed by one of the original authors and performers, John Foley, tells the story of four pump boys (gas station attendants) and two dinettes (waitresses) on some unidentified stretch of Highway 57 located somewhere between Frog Level and Smyrna, North Carolina. Although the play was written over thirty years ago (it premiered on Broadway in 1982) and at the time was a period piece harkening back even further, it doesn’t feel dated. Maybe that’s because, as Ray Charles said, music is a language which is universal and a show like this one delivers a slice of Americana that everyone can relate to, old and young.

Much of the success of the show has to be credited to the director John Foley. John conceived, wrote, and starred in the original production along with Mark Hardwick, Debra Monk, Cass Morgan, John Schimmel, and Jim Wann. It is a rare opportunity indeed when one gets the pleasure of seeing a revival or a regional production through the eyes of the creator. If anyone knows the play, Mr. Foley does. He has lived it. His engaging vision is conveyed via the brilliant staging, blocking, acting, singing and dancing. 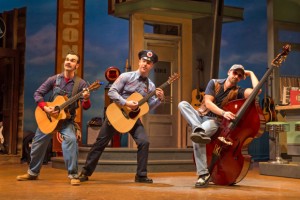 The remainder of the success of this engaging play must rest with an incredibly talented cast. James Barry plays Jim, one of the owners of the station. Mr. Barry (like the other actors in the play) is a quadruple threat, acting, singing, dancing and playing the guitar. Is there something he cannot do?Engaging, personable and charismatic, he breaks the fourth wall and treats the audience like patrons of his establishment, inviting them in to partake of good, old fashioned gossip and storytelling. Jason Ostrowski plays L.M., Jim’s partner, with incredible verve and gusto. He plays a mean accordion too! His “Farmer Tan” and “The Night Dolly Parton Was Almost Mine,” were grand slams.The talented Gabe Bowling as Pump Boy Jackson does a lively-spirited Elvis-like impersonation with his rousing “Mona.” Sam Weber as Eddie, not only acts, sings, and dances, but he also does yoga on a cello (you have to see it to believe it). The female portion of the ensemble is a perfect match up and mash up with the Pump Boys. Veteran Broadway actresses Alysha Umphress and Julie Foldesi play, respectively, sisters Rhetta and Prudie Cupp of the Double Cupp diner. As James Barry said after the show, he can listen to Alysha sing the phone book; and so can I. Their “Be Good or Gone” number is awesome. On par is Julie Foldesi’s “Best Man” (and she can play a mean accordion, too!).

Obviously, any great show is based on a successful collaborative process. So shout-outs must go to the lively choreography by Joann M. Hunter, meticulous scenic design by Michael Schweikardt; engaging lighting and sound design by, respectively, F. Mitchell Dana and Randy Hansen, and neat costume design by Brian Hemesath.

All in all, John Foley’s Pump Boys and Dinettes is a tour de force which, like the pie served at the Double Cupp diner, must be savored and enjoyed!

As I start this review, I must disclose that Pump Boys and Dinettes did quite a number on me, causing me a great deal of pain – that’s because it made me smile until my face hurt and laugh until my belly ached. But now that a little time has passed, I think I’ve finally recovered and owe a big thank you to the Paper Mill Playhouse for a night so well spent. Because as everybody should know, smiling is good for you! It reduces stress and improves your mood. Best of all, smiling leads to laughter – which is good exercise. It’s like a mini-workout for your abs (bye-bye planking!).

After a crazy day in the life of this husband-and-wife theatre reviewing team, both of us who also have day jobs and a combined brood of seven, attending a show like Pump Boys and Dinettes is pure, unadulterated pleasure. Debuting Off-Broadway in 1981 and on Broadway in 1982, it was written by its original stars, John Foley, Mark Hardwick, Debra Monk, Cass Morgan, John Schimmel, and Jim Wann. (We even caught Debra Monk in the audience on press night!) 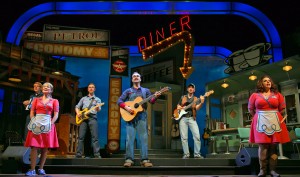 Simple in plot and theme, this two-sets-in-one, musical comedy features wannabe ladies’ man Jim (James Barry) and nerdy L.M. (Jason Ostrowski), affable owners of a filling station along Highway 57. With trusty employees and friends Eddie (Sam Weber) and Jackson (Gabe Bowling), when they all aren’t filling or fixing cars – or more accurately, avoiding filling or fixing cars – they regularly stop on in to the Double Cupp diner. Owned by the amiable Prudie Cupp (Julie Foldesi) and the feisty but stern Rhetta Cupp (Alysha Umphress) these spirited sisters serve up a great plate of food, a hot cuppa coffee and some fantastic homemade pie. The multi-talented cast of six weaves their stories into song with nearly 20 fun and rib-tickling numbers such as “Menu Song,” “Fisherman’s Prayer,” “Be Good or Be Gone,” “Tips,” and one of my favorites, “Farmer Tan.” Not only do they vocally nail every song, but they accompany themselves on guitar, piano, accordion, harmonica, bass fiddle, and just about anything in the kitchen that can be turned percussion from pots and pans to a variety of utensils.

The characters regularly break the fourth wall and engage the audience who eagerly clap and toe-tap, and as I did, nudge their seatmates, chuckling at the mostly lighthearted, well-written verses. Barry as Jim is the amiable, guitar-playing storyteller, with a heavy dose of Southern charm and plenty of audience appeal. L.M., played adeptly by red-haired, bespectacled Ostrowski is, to coin the expression oft-used by my teen daughters, quite adorkable. And he plays a mean piano while lamenting “The Night Dolly Parton Was Almost Mine.” In a humorously surprising moment, Bowling’s Jackson, buttoned up tight throughout, suddenly rips open his shirt and turns into a crooning heartthrob with “Mona.” Weber as quiet Eddie plays a mean guitar and is a sight to behold when he lays down, balancing his bass on his feet as he strums like a madman. 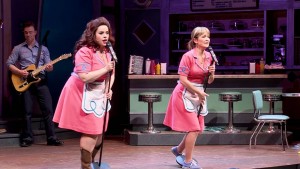 But it’s not just the Pump Boys who rock the stage – lest we forget the Dinettes! Foldesi is a tremendous talent both vocally as well as instrumentally, notably on the harmonica and accordion. She’s terrific as the spunky, sweeter younger sister. Umphress is the sometimes brash, single mother of two whose tremendous pipes bring down the house (we were fortunate to also have caught her in Broadway’s On the Town). This dynamic duo holds their own (and maybe even edges them out!) despite being outnumbered by the four men.

Pump Boys and Dinettes is both a feast for the eyes and for the ears. It is a charming show that will leave you with your smile still spread across your zygomatic major and orbicularis oculi (smiling muscles!). So if you’re looking to take a break from the fast lane, head on down to Highway 57 (or in this case, the Paper Mill Playhouse) where life is simple, the food is downhome, and the doesn’t get any finer.