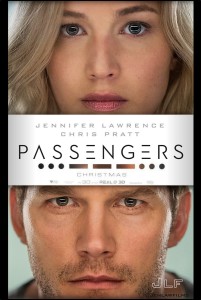 Okay, I’m a girl and I love movies where you get the feels. I’m a sucker for a good love story – the kind where you fight for what matters, work through the tough times, and ultimately get your happily ever after. Frankly, this applies as much to cinema fare as it does to real life; in any case, when given the option to partake of these kinds of chick-flick-ish story elements, I’d always be first in line. That is, unless my husband (who also is my co-reviewer) gets to choose (which he usually does), because it’s not that he dislikes romance, but when it comes to the big screen, he loves himself a good action adventure or science fiction yarn. (Yes, we do ascribe to somewhat gender stereotypical interests, but there’s plenty of crossover.) So when we went to see the Columbia Pictures fantasy/science fiction (thriller?) film Passengers, I assumed he was getting his way; from the trailers, I knew little more than that it was about a journey into space, with a little something for the girls – Chris Pratt; and a little something for the guys – Jennifer Lawrence. But ultimately we both were wrong and I can’t say that I was disappointed.

Now I’m well aware that Passengers, written by Jon Spaihts and directed by Morten Tyldum, has received less than tepid reviews (low on both Rotten Tomatoes and Metacritic), but I haven’t read them, as I don’t like to be unduly influenced before I write my own review. I also have heard the chatter about a variety of the film’s themes and twists. And I can’t say that I agree. My only criticism, I must to point to any negatives, is that there were a few draggy, “RunPee” kinds of moments. (You know RunPee? That downloadable app which touts, “Each movie has a list of carefully selected Peetimes…3-5 minute long scenes that don’t have crucial plot twists, or LOL moments, or exciting action.”) Maybe even a few more than the app might indicate. But despite them, I enjoyed it! 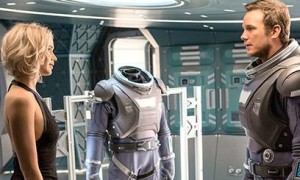 This is something of a tough review to write; however, because I’m not one for giving away plot twists and spoilers. That being said, I doesn’t permit me to delve wholeheartedly into all of the psychology, and there is a lot of it. At the outset we find that there are 5,000 passengers aboard the lush starship Avalon headed to a planet called Homestead II. They each lay in induced-hibernation pods for the 120-year one-way trip – people frozen in time, escaping Earth for a supposed better life on a distant colony, all for different and personal reasons. They won’t age, and only will awaken four months from their destination to party down on the ultimate five-star (maybe ten?) spaceship with all the amenities. But due to a technical malfunction, Jim Preston (Pratt) awakens to find he’s got another 90 years to go and not a soul with whom to communicate except for a snarky android mixologist named Arthur (a very entertaining Michael Sheen) who has nothing to do but spend his years polishing bar glasses, pouring mean martinis, and doling out canned advice. But like Tom Hanks’ Chuck Noland in Cast Away, after a year of trying everything to find a resolution to the mess he’s in, a bearded and bedraggled Jim is at the end of his rope, finding the solitude wholly overwhelming.

Then beautiful, young writer Aurora Lane (Lawrence) is awakened. She initially goes through the same frightening realization as Jim did; that there is no way to go back into hibernation and that they will die long before reaching their destination. We also learn that Aurora never found happiness and her space journey was to be the potential and hopeful remedy. That’s where the love story begins – but it is fraught with fears and frustrations; devastatingly dark moments – very dark – and impending doom. 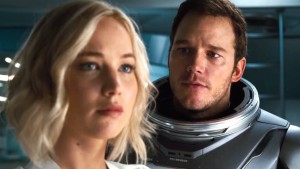 On the one hand we can explore the very basic assumption that humans are social beings – our lives, physically, emotionally, and psychologically are inextricably tied others, upon whom we depend for our very survival. We quite literally are not meant to be alone. What happens to the likeable, easy-going Jim when he’s without companionship demonstrates this – he becomes despondent and eventually suicidal. There also are moral dilemmas which stem from the “plot twist” moment – but my lips are sealed. Many critics have vehemently screamed out about them, comparing Jim and Aurora’s relationship to the ultimate victimization and akin to Stockholm Syndrome. I can see both sides; but from a purely human standpoint, I understand where each the characters go and why. Life is fragile, but it is worth living to its fullest. (See, tough review to write without giving anything away – you’ll just have to see it to decide for yourself.)

Aside from the dynamic (and beautiful) duo of Pratt and Lawrence who act their derrieres off, as well as the delightful Sheen, we get a few great on-screen moments with Laurence Fishburne as Gus Mancuso and a brief cameo by Andy Garcia as Captain Norris. The CGI is fantastic and for real, I’d take a ride on the Avalon any time, just to be uber-pampered and catch those incredible outer space views – just bring me back in say, 120 days, not 120 years. Now that’s a vacation.

If you’re expecting what my husband did – pure science fiction and adventure/thriller – well, there is some of that. But if you’re game for a hefty dose of romance and drama – well, there’s that, too. To me that sounds like a great combo for a date night or at least a let’s-meet-in-the-middle kind of compromise. And no matter what, you’ll likely walk out of the theatre asking yourself “What would I have done?” To me that’s good cinema – those films that leave you thinking.

BAIT AND SWITCH — the action (generally illegal) of advertising goods that are an apparent bargain, with the intention of substituting inferior or more expensive goods.

The trailer and promos for the movie Passengers definitely constitute a carefully thought-out marketing plan using bait and switch tactics.

First the BAIT: two of the biggest stars today – Chris Pratt and Jennifer Lawrence. The setting: a colonial spaceship traveling through space – the final frontier. The plot: The ship goes through a meteor storm causing Jim Preston (Chris Pratt) to awaken from deep hibernation 90 years too soon. After more than a year living alone he is joined (can’t say how – it will spoil the movie) by Aurora Lane (Jennifer Lawrence) and Chief Deck Officer (Laurence Fishburne). The conflict: certain ethical and moral actions undertaken by Chris Pratt. The rising climax: the meteor storm has damaged the ship leading to the imminent breakdown of all systems and death to everyone on board including 5000-plus sleeping passengers. Production value: 110-million dollar production budget. Cool sci-fi doodads: swimming pool with empyreal view; ultra hi-tech food cooker and dispenser (okay, Star Trek had one too); a charismatic, artificially intelligent robot bartender named Arthur. Nice CGI and special effects: especially the anti-gravity scenes. 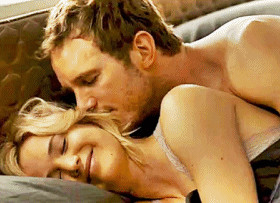 The SWITCH: a chick-flick with expensive sci-fi trappings that have nothing to do with the story. Indeed, if Jon Spaihts’ screenplay was a novel, it would be categorized as women’s upmarket fiction. Not that there is anything wrong with a chick flick – but do we really need the bait and switch? I wish I could go more into detail, but that would just violate our policy (my wife’s) against giving out spoilers.

Apart from the bait and switch issue, the movie is TOTALLY derivative. Yeah, I know that there is nothing original anymore, especially in Hollywood – but still – there were so many homages, clichés, and rips that my mind became overloaded like the defunct computer, Hal, in 2001: A Space Odyssey. There were real similarities to Cast Away, Lost in Space, Gravity, 2001: A Space Odyssey, Titanic, Interstellar, 50 Shades of Grey, Groundhog Day (yes, Chris Pratt’s obsession with Jennifer Lawrence in a way mirrors Bill Murry’s obsession with Andie MacDowell), The Martian, Star Trek IV, Alien, The Bible, and countless others.

Despite all of the above, I did enjoy the movie. Chris Pratt and Jennifer Lawrence had REAL chemistry. The solid acting and direction by Morten Tyldum kept me engaged throughout; no anti-heine itch cream needed. Michael Sheen’s performance as the android robot was MasterCard priceless.

Would I have gone if the trailer portrayed Passengers as Romeo and Juliet in Outer Space (with overtones of Who’s Afraid of Virginia Woolf?)? Probably not. Am I glad I saw it? Yes. So I guess the bait and switch wasn’t that much of a negative tactic after all.