Someday Productions LLC and Pillow Talking are pleased to present the following review of OTHER DESERT CITIES by the Town Players of New Canaan, CT 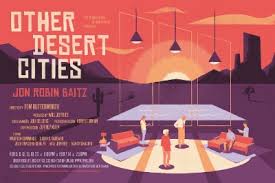 For Tickets or Additional Information

DRAMA – every nuclear family has it and for some, it even can be downright volatile. You can’t pick your relatives as they say, and therefore, when you take a bunch of often mismatched personalities, merely joined by common bloodlines, not only can all hell break loose but what also may break are hearts, relationships, and fragile psyches.

This is the crux of the matter for the Wyeth family, the central characters of the stage drama Other Desert Cities, a tremendous endeavor by director Tom Butterworth, producer/actor Will Jeffries, and The Town Players of New Canaan. This dialogue-heavy work, written by Jon Robin Baitz and nominated for multiple Tony Awards as well as the Pulitzer Prize for Drama in 2012, is a layered, intense, at times depressing, and oftentimes comical look at life in a California upper-class home. It is a penetrating study of what sometimes happens when grown children come back to confront their parents about childhood issues and when the unwelcome ghosts of the past rear their ugly heads. 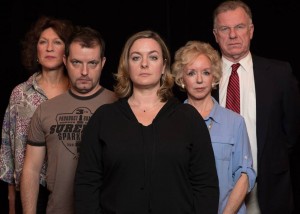 When my other half and I discussed and dissected the play on the way home (which we usually do), it was interesting that each of us “sided” with a different character or characters in this dysfunctional bunch. Specifically, Wayne sided with the parents – the oil-and-water yet complementary duo comprised of the controlling, completely unflappable Polly (played to a “T” by Maureen Cummings) and her often deferential, “oak-like” husband Lyman (a perfectly cast Jeffries). I, on the other hand, felt a weakness for Brooke (Julie Thaxter-Gourlay gave us a remarkably dimensional portrayal of their troubled daughter). Wayne viewed the parents as the victims; their adult daughter casting stones at them for elements of her upbringing for which she faulted them. I saw Brooke as someone battling against the environment in which she was raised as well as the series of events which comprised the family’s troubled history – the chronosystem in which they all were embedded (can’t take the psychology out of this girl). No doubt we saw the same gestalt, but zeroed in on the different parts.

What begins as a family reuniting for the Christmas holidays quickly transforms into some insanely intense fireworks, drawing everyone to the core of the colorful and dangerous pyrotechnics. Brooke has written a book – a personal catharsis, following six years away from her family and after having spent time in a mental hospital to heal after a breakdown. Unfortunately her memoirs aren’t entirely just her memoirs, as anything related to her life and her childhood experiences also is inextricably tied to the lives of her family members. Her parents and her brother, Trip (the animated and entirely snarky Larry D. Gabbard), take issue with her literary endeavor once they are alerted to the material. She is about to expose a huge family secret – one that her staunchly Republican, status-conscious parents would prefer to remain buried.

Brooke’s only solid source of support seems to come from her Aunt Silda (the incredibly dynamic Nancy Sinacori) an alcoholic who is barely clinging to sobriety and frankly would rather not be. She is the comic relief and the crazy aunt everyone would simultaneously love to have but be mortified to introduce to one’s friends. 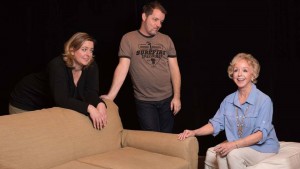 What Other Desert Cities explores is each individual’s interpretation of the family’s history. It brings to light how differently people see things even when having been through the same experiences. Was it “revisionist history”? Does adult Brooke creatively retell her childhood? Or was she somehow emotionally handicapped? Having seen the events through the eyes of a child (and consequently not having all of the facts) left her no choice but to try to fill in the holes. Ultimately Polly and Lyman’s decision to bury the monstrous secret created a pain no one could identify or understand.

The strong ensemble cast created a facsimile of an authentic American family; barbs, bickering, and inside jokes abounded and the tensions between them felt palpably real. Despite references to the early 2000s and the Reagan era, the story seemed no less current.

This was our first opportunity to see the work of The Town Players of New Canaan and The Powerhouse Performing Arts Center in Waveny Park. A perfect example of what community theater can be, an energetic and involved audience, a spectacular venue, an enviable, thoughtfully constructed set. They chose a provocative, intelligent piece of dramatic art and skillfully executed it. We hope to be back again and again to see their future work!

Shrek’s onion analogy (ogres are like onions; they have a lot of layers) is a simile that is appropriate for the much acclaimed play Other Desert Cities by Jon Robin Baitz. The play has many layers which are slowly peeled away by its characters until we see their true naked, vulnerable selves. The play premiered in 2011 Off-Broadway and then was transferred to Broadway in 2012 where it received five Tony Award nominations and was a finalist for the Pulitzer Prize in 2012. 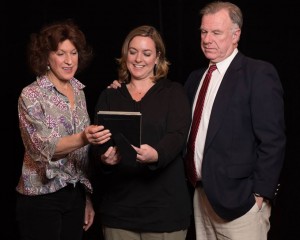 The Town players of New Canaan (TPNC) took on the challenge of bringing this complex, multi-layered work to community theatre. I am pleased to report that the TPNC did it justice! It was a gripping, funny, intense, thought-provoking look into values, truth, and perception.

The play takes place on Christmas Eve, 2004 in Palm Springs. Brooke Wyeth (Julie Thaxter-Gourlay) returns home for the holidays after a six-year absence. She is a writer who has broken her writer’s block by penning her memoirs which divulge dark wounds in the family history; wounds her wealthy, conservative parents and brother would rather keep buried. All hell breaks loose when the family reads the manuscript. Differing values, judgments, and perceptions rise to the surface and clash, giving new meaning to the George Bernard Shaw’s quote, “If you cannot get rid of the family skeleton, you may as well make it dance.” 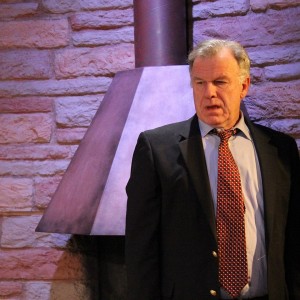 The acting by the five-person cast was spot-on. Veteran actors Maureen Cummings (Polly Wyeth) and Will Jeffries (Lyman Wyeth) made the perfect rich, vain, Republican couple whose time was spent shopping at Saks, playing tennis, drinking martinis, and worrying about their public image. Jeffries had great presence as the bacon-providing patriarch. Cummings displayed the cool, back-biting veneer of an aristocrat (aka snob) with little patience for mistakes or misunderstandings. Julie Thaxter-Gourlay showed her acting chops and emotional range as she nimbly went from calm to enraged to utterly hysterical. Larry D. Gabbard brought just the right amount of witty sarcasm and TLC to his portrayal of Trip Wyeth, caught in the chasm between being a dutiful son to Polly and Lyman and supportive little brother to Brooke. Finally, Nancy Sinacori provided a healthy dose of comic relief as Silda Grauman, Polly’s pot-smoking, hard-drinking, liberal sister.

The play was capably directed by experienced theatre vet Tom Butterworth. He was able to move his actors like chess pieces through a masterfully played game that had a real punch for an ending.

Watching the acting and the tale unfold, I was reminded of the 1980 classic (which marked Robert Redford’s directorial debut) Ordinary People based on the novel by Judith Guest. Without giving away too much (my wife hates when I put in spoilers and usually edits them out), the acting and themes are very similar to Other Desert Cities.

Finally, I must give big Pillow Talking kudos to the Production Designer, Robert Doran, and the crew responsible for the set. It was incredibly detailed down to the framed, photo-shopped pictures of Lyman Wyeth with Ronald Reagan. It reminded me of the working condo set in The Qualms at NYC’s Playwrights Horizons.

If you want to see really fine theatre and all that it implies, head for the sign along the highway that says, Other Desert Cities; or at least head to The Powerhouse Performing Arts Center in New Canaan, CT. 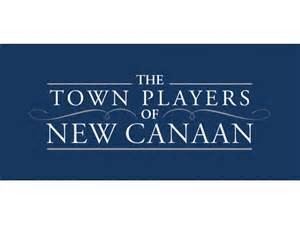