Pillow Talking’s Review of ON YOUR FEET! THE STORY OF EMILIO & GLORIA ESTEFAN

Someday Productions LLC and Pillow Talking are pleased to present the following review of ON YOUR FEET! THE STORY OF EMILIO & GLORIA ESTEFAN at the Westchester Broadway Theatre (WBT) 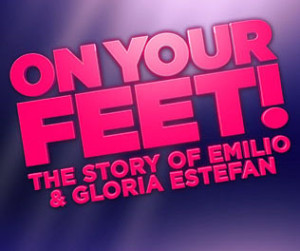 I’ll admit it, I’m an ’80s girl. I once rocked the Debbie Gibson-inspired black hat, wore lacy, fingerless gloves like Madonna, and used toxic tons of Aqua Net to rival the hairstyles of Cyndi Lauper. There’s also a reason I still can sing every song lyric from the era – and that’s because I listen to them all daily on Spotify, the local ’80s radio station, and any other chances I can get (just ask my husband and co-reviewer, I drive him nuts). My favored playlist is extensive, but it goes without saying that Gloria Estefan and the Miami Sound Machine were and still are a part of it.

Despite my love for all things ’80s, I’ll admit I didn’t know much about the new musical On Your Feet! The Story of Emilio & Gloria Estefan. When it came up on the slate as the 211th production for Westchester Broadway Theatre (WBT), however, I was certain it was going to be a show to remember. It’s tough to find a production that WBT hasn’t been able to pull off in grand fashion, and On Your Feet! is no exception. 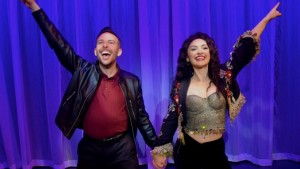 Considered a “jukebox musical,” the story of the husband-and-wife duo really is more than that, because most jukebox musicals are, in my opinion, loose stories woven around songs. This, on the other hand, is a great love story, a story of triumph over adversity, and a solid musical production with a cast replete with triple threats. In it, we are taken from Gloria’s early years in Miami’s Little Havana to her teen years when she first meets Emilio to her nearly tragic tour bus accident at the height of her career when she breaks her back and almost gives up her music. On Your Feet! doesn’t shy away from Gloria’s struggles with her father’s disabling multiple sclerosis nor her at times crushing estrangement from her mother who didn’t support Gloria’s choice to abandon a career in psychology over music or her relationship with Emilio.

Featuring tons of recognizable songs produced and recorded by Emilio and Gloria Estefan & Miami Sound Machine (“Conga,” “Get on Your Feet,” “Live for Loving You,” to name just a few), with Book by Alexander Dinelaris, expertly directed by Donna Drake, and choreographed by Rhonda Miller, On Your Feet! rocks the house and like many musicals of its kind, you’ll want to get up on your own feet and dance in the aisles (but, alas, you can’t as WBT uses their aisles for entering and exiting characters!). The show stars Maria Bilbao who is perfectly cast as Gloria Estefan and one might even say rivals Gloria herself. She has terrific chemistry with Jose Luaces who is exceptional as Emilio Estefan. Karmine Alers is a formidable Gloria Fajardo, Gloria Estefan’s domineering and disapproving mother. Byron St. Cyr is superb as José Fajardo, Gloria’s ailing father. Sandy Rosenberg as Gloria Estefan’s grandmother, Consuelo, brings tremendous heart and humor to the tale. She’s Gloria’s biggest supporter and a major reason that Gloria pursues her dreams in music. Lauren Cosio is great as Gloria’s sister Rebecca Fajardo; as are Andrew Alcruz as Nayib Estefan, Gloria and Emilio’s son; and Isabella Preston as Little Gloria Estefan.

In addition to all the aforementioned, big hands to Steve Loftus for Set Design; Keith Nielsen for Costume Design; Andrew Gmoser for Lighting Design; Mark Zuckerman for Sound Design; Gerard Kelly for Wig/Hair Design; and all the others who contributed to the dynamic whole.

If you love the music of the ’80s, Gloria Estefan, and the Miami Sound Machine, or if you just love an inspiring story about making your dreams a reality, On Your Feet! can more than fit the bill. WBT has another hit on its hands and I look very forward to the next.

I have two confessions to make which may or may not have you think that this is a biased review. First, I have been going to Westchester Broadway Theatre since it opened, when buffets and leisure suits reigned supreme (talk about dating yourself). The second confession is that I love the music of Gloria Estefan and the Miami Sound Machine. Who can forget the pounding percussion and driving rhythms of “Turn the Beat Around” in the Sylvester Stallone/Sharon Stone 1994 film, The Specialist?

So, I will endeavor as much as possible to be completely objective.

The Story of Emilio & Gloria Estefan in On Your Feet! at Westchester is fantastic! Thanks to show-stopping choreography by Rhonda Miller and astute direction by Donna Drake, if you are, as the title suggests, not “on your feet” by the end of this production, then you are not only tone deaf, but soul deaf, as the music of Miami Sound Machine reaches into your very soul to elicit a palpable, visceral response.

Yes, it helps that it’s a rags-to-riches story that plays out the American Dream; Jersey Boys among many others can boast the same overall plot structure. But the fact is, we love films and musicals where the underdog beats incredible odds and thousands of naysayers to make his or her dream come true. 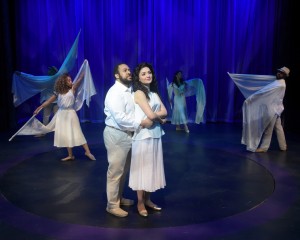 The casting is spot-on. Maria Bilbao (Gloria Estefan) and Jose Luaces (Emilio Estefan) are wonderful. Forgetting their musical and acting ability for a moment, their chemistry on stage is as solid as they come (think Bradley Cooper and Lady Gaga in A Star is Born). I cannot tell you how many times the character of Emilio kissed the character of Gloria, but the incurable romantic in me said, “Wow, that looks authentic – you can feel the heat between them.” Karmine Alers (Gloria Fajardo) and Byron St. Cyr (Jose Fajardo) give brilliantly layered performances as Gloria Estefan’s parents as does Sandy Rosenberg as Consuelo. Shout-outs must go to the rest of the principals including Lauren Cosio (Rebecca Fajardo), Andrew Alcruz (Nayib Estefan), and Isabella Preston (Little Gloria Estefan).

One of the most painful regrets of a reviewer is to leave out anyone’s contribution to the making of a solid show like this one. Having produced shows in the past, we know what goes into producing and  that it is a truly collaborative experience. You cannot have a show like On Your Feet! without a great musical director like Bob Bray, or a great set design by Steve Loftus and lighting design by Andrew Gmoser. Similarly, a show like this one has got to stand on the shoulders of a strong Ensemble which works seamlessly together, so props to the Ensemble: Sydney Alise, Edgar Cavazos, Lauren Cosio, Arthur Cuadros. Logan Epstein, Michael Gorman, Liesl Jaye, Edgar Lopez, Félix Marchany, Sherena Medford, Tristan Miller, Natalia Nieves, Nico Seidita, Alexis Semevolos, and Byron St. Cyr.

Don’t worry if you never heard of the Miami Sound Machine. Its songs have become part of the American musical repertoire as well as its history and before long you’ll be clapping and even singing to such hits as “Get on Your Feet,” “Don’t Want to Lose You,” “Reach,” and Gloria Estefan’s stunning comeback number after her nearly fatal accident, “Coming out of the Dark.” You may even be dancing in the “Conga” line at the end of the show.

The 211th production at Westchester Broadway Theatre is a hit not just because of the show-stopping songs and musical numbers, the wonderful acting, or the fact that it is a rags-to-riches plot. It is a hit because it is a story of persistence and perseverance; of daring to be different, and reaching for the stars. Get on your feet and go see this inspiring musical now!