Someday Productions LLC and Pillow Talking are pleased to present the following review of OKLAHOMA! at The Goodspeed 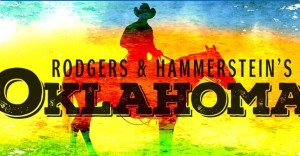 As is often the case when my husband, Wayne, and I are set to see certain productions, much like SpongeBob’s “Musical Doodle” (yes, we have seven kids between us!), Wayne is overtaken by an earworm – or three – and can’t help himself but warble the lyrics to classic showtunes. Before, and now since we’ve had the pleasure of seeing Goodspeed Musicals’ Oklahoma!, I’ve also had the occasion to hear random chunks of “People Will Say We’re in Love,” “Oh, What a Beautiful Mornin’,” and “The Surrey with the Fringe on Top” no less than  537 times each (okay, that’s just possibly a slight exaggeration).

Aside from Wayne’s loving but somewhat flawed deliveries, I’ll say with certaintly that these are tunes worth hearing – by the professionals – and they are done with incredible finesse, along with equally as spectacular acting and dancing prowess at the inimitable Goodspeed in East Haddam. We’ve come to expect no less at Goodspeed and were also thrilled to take in yet another display of masterful direction by veteran director Jenn Thompson.

This had been my first opportunity to see Rodgers and Hammerstein’s Oklahoma! despite having musical theatre/dance parents who’d played cast albums and countless showtunes from nearly every kind of classic production. My familiarity with the work had only been with the songs and not within the context of the story. While this unquestionably is a period piece, it is as entertaining today as I imagine it was back when it first opened to great acclaim on Broadway in 1943.

So if you’ve been living under a rock, or if you’re like me and just haven’t ever had the chance to see Oklahoma! (I can’t believe I also haven’t seen Hugh Jackman’s dreamy 1998 performance which is available on DVD!), it tells the story of the romance between handsome cowboy Curly McLain and innocent but stubborn bumpkin Laurey Williams who lives and works on the farm with her Aunt Eller. Her aunt is a comical woman who’s always got something to say and is essentially the town matriarch. As storybook romances go, there’s nearly always a hitch – and here, Laurey’s playing hard-to-get (although Curly isn’t giving up so easily); but there’s also a troubled farmhand by the name of Jud Fry who has his eye on Laurey, too. This threesome doesn’t account for the only amorousness which abounds – the funny and flirtatious Ado Annie Carnes is a girl who’s in love with love – and she can’t make up her mind between traveling Persian peddler Ali Hakim or rodeo cowboy Will Parker. But if Annie’s dad, Andrew Carnes, has any say in it, it’s $50 for his daughter’s hand or suitors take a hike.

Most of the production revolves around the townsfolk’s preparations for the upcoming box social – a modern-day dating game of sorts where the menfolk get to bid on boxed meals prepared by the local young ladies; and the winner earns the occasion to dine with the secret preparer. But it becomes a merry-go-round of boy-loves-girl-loves-boy/different-boy-loves-girl and what should be a whole lot of fun takes a dark and rather grim turn.

Rhett Guter as Curly is exceptional. No stranger to leading roles, we’ve had the pleasure of seeing Guter as Conrad Birdie in Goodspeed’s Bye Bye Birdie, and he nailed the dashing, confident persona in both performances. Samantha Bruce as Laurey Williams is a lilting songbird who delivers the perfect balance of vulnerability and grit. Terry Burrell is dynamic as Aunt Eller Murphy, the voice of reason and often the comic relief. Matt Faucher’s Jud Fry is chilling – he gives this role the intensity and nuanced creepiness that makes your hair stand on end and has you looking for the nearest exit should he lay his eyes upon you.

Gizel Jiménez as Ado Annie Carnes nearly steals every scene with her infectious enthusiasm along with Matthew Curiano as Ali Hakim, the hysterically funny peddler who’d do anything to avoid marriage. Jake Swain (whom we also saw in Bye Bye Birdie) as Will Parker is fabulous as is C. Mingo Long as Andrew Carnes. One can’t, of course, leave out the most annoying laughs which spew forth from Gertie Cummings – Kate Arrington Johnson nails them in grand hyena-like fashion, rather, like nails on a chalkboard. And finally, Madison Turner does a spectacular dance number as “Dream Laurey.”

Whether or not you’ve ever been to Oklahoma, you’ll love the travel back in time to pre-Oklahoma Indian Territory, Summer of 1906. Come and enjoy!

I must begin this review with a confession I’d never thought I would have to make as a die-hard culture vulture. I was a kid from Yonkers who would much rather see a play on Broadway than the Yankees play in the Bronx. (No, that wasn’t the confession.) Although the original Oklahoma! on Broadway was before my time, I did see the Academy Award-winning film version on television in 1970. I didn’t like it. In fact, it was at the bottom of my musical theatre list and I avoided productions of it like the plague. (That’s the confession.) Gordon MacRae just didn’t do it for me as Curly. I thought his daughter, Meredith MacRae had more verisimilitude as a country bumpkin on the TV series Petticoat Junction. Shirley Jones will forever be Mamma Partridge to me. Even the late, great Rod Steiger (whom I could listen in awe to his reading the names in a phone book – remember those?) and a stellar supporting cast featuring Gene Nelson, James Whitmore, and Eddie Albert couldn’t save it for me. There, I’ve said it and feel better having purged.

Needless to say, having that initial opinion of Oklahoma! made me hightail it to the restroom whenever theatre cocktail chit chat turned to the play. At least that was the case until I saw the theatrical production featuring Hugh Jackman as Curly, Shuler Hensley as Jud, and Josefina Gabrielle as Laurey. As a result of this production, I became an “Okie from Muskogee” and Oklahoma! shot from the bottom of my musical theatre list to the top.

So it was with great anticipation that I went to see Goodspeed Musicals’ version of the play especially with Jenn Thompson directing, whose prior directing work on the classic Bye Bye Birdie at Goodspeed was a veritable smash. I am so happy to report that Goodspeed’s Oklahoma! followed in the wake of Birdie and was fabulous.

All of the vital production elements worked together in seamless unison including: Scenic Design (Wilson Chin); Music Direction (Michael O’Flaherty); Choreography (Katie Spelman); Lighting Design (Philip S. Rosenberg); and an aspect I have really come to appreciate (after seeing a virtual plethora of bad wigs in both community and professional theatre), Wig and Hair Design (Mark Adam Rampmeyer).

The casting was pitch perfect (pun intended). I did not pine away once for Hugh Jackman or Shuler Hensley. Rhett Guter, who gave a knock-down-drag-out performance in Birdie was on the money again in Oklahoma! as the charming and charismatic Curly. Matt Faucher gave an equally compelling and commanding performance as the sinister Jud Fry – not only was he scary, but he could sing and dance too! Samantha Bruce definitely did more than hold her own as the tom-boyish-yet-utterly-feminine  Laurey who held the rapt attention of both Curly and Jud. “People Will Say We’re in Love,” has become one of my all-time favorite songs from musicals, and both Mr. Guter and Ms. Bruce did it ample justice in the body of the play and the reprise as well. While the stunning supporting cast and Ensemble is just too large to give individual notes on each performance, special shout-outs must go to Terry Burrell as the sagacious Aunt Eller Murphy; Gizel Jimenez who was captivating as Ado Annie Carnes; Matthew Curiano who was side-splitting as Ali Hakim and Jake Swain as Will Parker.

As in the case of Goodspeed’s Bye Bye Birdie, Jenn Thompson drilled down into the heart of a classic musical, extracted and retooled those salient elements into an updated unified adaptation that still entertains, engages and thoroughly enthralls modern audiences.

Goodspeed’s production of Oklahoma! will take you for a wonderful ride in “The Surrey with the Fringe on Top.” Believe me when I tell you that you will be transformed into an “Okie from Muskogee” just like I was.